It took Gabriel de la Mora five years of architectural practice to decide to become an artist. It took him another five years to quit painting. It took two months to turn a single sheet of plain A4 paper into a delicate piece of scorched remains. And it would take De la Mora another ten years to finish his experiment with fire and paper, an endeavour which he was never certain could or would come to fruition.

Understanding the art of De la Mora requires a look beyond the immediate present and back into time that has transpired; the A-Z of each work. The surface appearance (literally in several cases) can incorrectly be interpreted as another step in the discourse of monochromatic art; however, material decisions are imbued with greater relevance and production acquires its own meditative ritualism, aspects which contribute to the work being so much more than is initially apparent.

Take for example Si la repetición existe… (2017-18), a carved obsidian sentence from Difference and Repetition (1968) by Gilles Deleuze, which has been arranged alphabetically, 31 As, 1 B, 9 Cs and so on. Factoring in our growing detachment from the source of production and an increased reliance on immediate digital technologies, it is easy to assume that these neon shaped letters were the by product of an automated or industrialised system. Made to order. Whereas, the truth is more complex. 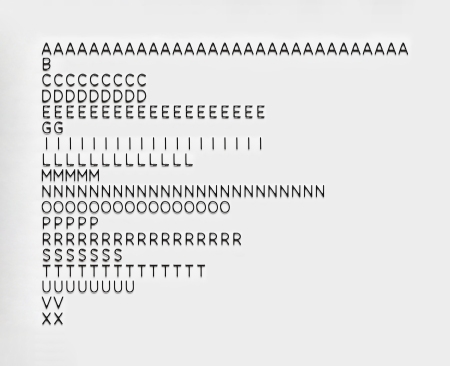 When De la Mora began considering obsidian as a medium for text, many artworks ago, he visited four workshops. Each expressed primarily economic terms in their tender and told him of the [near] impossibility of his request; the problem being that obsidian’s vulnerability to fracture. The tools used to carve and polish it vibrate, and as the obsidian is worn down, thinner and thinner, the chance of breaking increases. Not only that, but of each mined block of obsidian, only the centre is pure untainted black, the part De la Mora desired.

A fifth artisan agreed, armed with an absolute belief that he could produce the impossible. Not a single word on the subject of payment was spoken, only that it would cost what it would cost. To date Si la repetición existe… is the most ambitious artwork the relationship has produced, the accumulated experience of expert artisans pushing their medium to its limit. 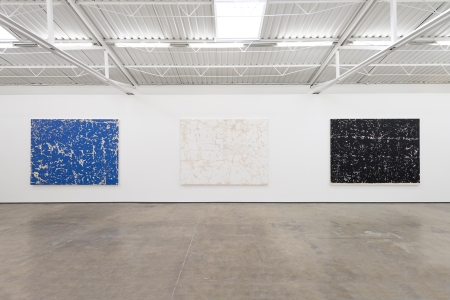 Now look at Pomona 42 I (2017), Pomona 42 II (2017) and José Rosas Moreno 110 III (2017), three detached consolidated ceilings that De la Mora reclaimed from the noble houses of Mexico City and transformed, by turning vertically, into art. Initially installed in 1908 and 1915 each ‘painting’ is over one hundred years in the making, they are the palimpsestic couriers of family histories; below them people lived, celebrated, entertained, fought, made love, bore children. Age has wearied them, the paint cracking, forming constellation like maps. In reverence to their meaning they have been repaired by expert conservators as if they were the finest oil paintings. The result, when turned from horizontal to vertical, reads like Robert Ryman or Yves Klein, but is in fact more akin to portraiture.

Homelife resonates across the gallery in 273,472 (2016-17) and 231,181 (2017), monochromes made by breaking down egg shells until the human thumb can break them no more. Then in a second phase of intensive labour the fragments are stuck to board, with little more than a hairline crack between them. Invisible from a distance they are on closer inspection the record of history. Made by dedicated assistants, they are on the edge of absurdity; however, expressed in terms of a life, they are only portions of time, the incessant breaking of eggs each morning to put food in front of family. 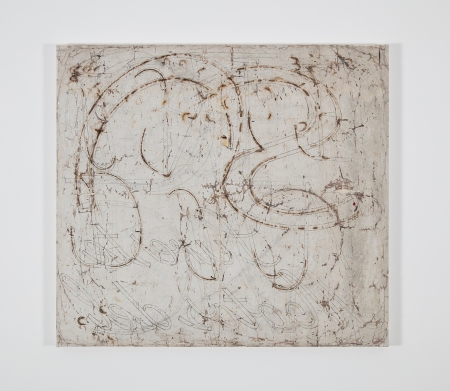 And then to the final series, N.P.9 (2017), N.P.1 (2017), N.P.2 (2017) and N.P.15 (2017), humble sheets of fabric brought from a neon workshop, stretched and put on the wall. Readymades in a fashion, but refuting that term as they do not fall off a production line. The fire retardant material is used time and time again by neon craftsmen, flame and colour scars the surface, until exhausted of space it is discarded, used up. They show an economy, a deliberation to maximise potential, an individual’s thought process, as they too master a repetitive action.

Why do I feel it necessary to talk through De la Mora’s work in such detail? Because each is a story on human scale; each needs to be understood to understand the other scale of time they speak of. A counterweight. What appears to art literate eyes as formalistic considerations, are from a scientific vantage seen as an expression of entropy, the great expanding of everything into an ultimate orderedness.

The evenness of surfaces is a manifestation of this end point. The repetition of burning paper, a ritualised microcosm of the macro. The ordering of a sentence into its most logical formation, impossibly unreadable and inhuman, another means of conveyance.

These works in their production tie together intensely human terms of experience, infinitesimal actions that build to form a life, with the greater experience of matter moving from a singular point to complete expansion. From fire to absolute zero. De la Mora embarks on ventures that cannot be said to have an end. The obsidian artisan did not know whether in his life he could complete what was asked of him. The studio assistant did not know how long it would take to turn eggs into a canvas of complete white; generations of families took part in the process that resulted in those exquisite contemplations. And De la Mora himself never knew if he could turn his entire dissertation into a set of forty three burnt sculptures.

In these actions, weighed with the potential of failure, of never reaching completion, De la Mora links repeated human actions to a larger order of things. Our comprehension of time, trains us to see it in portions relative to our lives; the art of De la Mora attempts to free us from such limitations, to open up our vision, to make us look deeper into the future, to see what we are part of.

We often consider the artwork as fixed and final. It isn’t. The pages that make up De la Mora’s ten year incineration project are fragile; contained within perspex boxes they require absolute care to move without causing them to break and crumble into ash. One by one, as they are exhibited in galleries around the world they will begin to disappear. Eventually, potentially beyond the life of De la Mora, beyond my life or yours, they will all turn into cold nothingness. The process of an artwork only ends when the artwork ends. Likewise we all stretch beyond our deaths, we transform into new forms thousands of times over before everything comes to its closure.

Elliott Burns is an independent curator and writer living between London and Mexico City. Having graduated from Central Saint Martins’ MA Culture, Criticism and Curation program he has worked as a curator for UAL on a series of exhibitions, as production assistant on Art Night 2016, and co-founded Off Site Project, an online exhibition space.