It’s hard to name an artist whose work is more easily recognisable. Yayoi Kusama (Japan, 1929), with her love for polka dots and pumpkins, and a masterful use of a vast array of media, has been creating happenings and beautiful displays for almost seventy years. At almost the end of her 9th decade, her work still produces some of the most recognisable images in today’s contemporary art scene.

If you were to pick one recurring topic from Kusama’s unending body of work it would, un-ironically, be infinity. Her pieces nearly always contain a contrasting use of negative and positive space, a circle, a loop… From the spaces a round mark of paint may make, to the hundreds of lights dangling in the darkness of a mirrored room, Kusama nearly always manages to disconnect us from our environs, and from time itself, absorbing us into her work and installations. 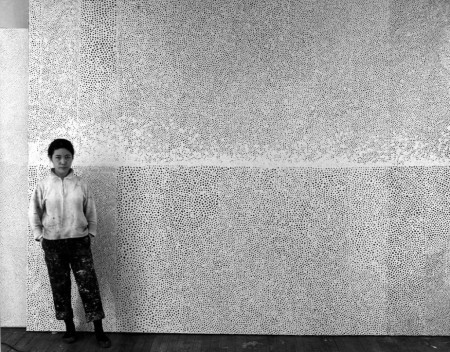 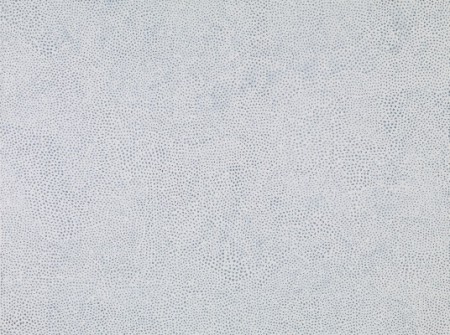 Kusama’s Infinity Nets brought the artist great acclaim in the 1950s and 60s when they were displayed in New York for the first time. The series has continued every decade since then, providing a steady contrast to the more vibrant pieces that most people are familiar with. They are quietly wonderful, successful and painstakingly done. Loop upon loop laid in acrylic, over vast surfaces, in monochrome. Up close they are almost blinding, with the eye unable to pick one point to focus on. Further back however, you see the real composition, one which seems to have the natural ebb and flow of tension.

Not long after these paintings became so well known, Kusama created a sculptural rendition of that same approach, with plastic mirrored orbs positioned in a garden in 1966. Titled Narcissus Garden (1966) the piece drew together many threads of Kusama’s work, most predominantly the mirror and the orb,  and offered a beautiful composition that up close was a confrontation of the viewer with themselves in the reflecting surface. At the time, Kusama was offering the passersby the opportunity to purchase the orbs for as little as 2 dollars each, with signs posted nearby informing the viewers “YOUR NARCISSIUM [sic] FOR SALE”. Since that time, the piece has been recreated, in longer lasting stainless steel, and presented at a number of locations, offering a great deal of art for sale.

In fact, Kusama is possibly the leading female artist in the art market. Her works can so often be broken down in to parts and sold off, like the orbs in Narcissus Garden. With such sensational installations it is no wonder that Kusama’s work is  so instagrammable and therefore more appealing to art dealers and buyers alike.

Yayoi Kusama is represented by Victoria Miro. She represented Japan at the 45th Venice Biennale and has exhibited in countless exhibitions including; Yayoi Kusama: Life is the Heart of a Rainbow, National Gallery of Singapore (2017); travelling to Queensland Art Gallery – Gallery of Modern Art, Brisbane (2017 – 2018), and Yayoi Kusama: In Infinity, which travelled from the Louisiana Museum of Modern Art, Humlebaek, (2015 – 2016) to Henie Onstad Kunstcenter, Oslo (2016); Moderna Museet, Stockholm (2016) and Helsinki Art Museum (2016 – 2017). Kusama Yayoi: A Dream I Dreamed was first presented at the Daegu Art Musuem, Korea (2013) and travelled subsequently to the Museum of Contemporary Art, Shanghai (2013 – 2014); Seoul Arts Centre, Korea (2014); Kaohsiung Museum of Fine Arts, Taiwan (2015); and the National Taiwan Museum of Fine Arts, Taichung (2015).

All the Eternal Love I Have for the Pumpkins, 2016. Installation view, Yayoi Kusama, Victoria Miro, 25 May – 30 July 2016. Photography: Thierry Bal