Image Courtesy of ‘Whenever the Heart Skips a Beat’

Opening of ‘Whenever the Heart Skips a Beat’, Mehringplatz, Berlin. Project running: 1 – 15 September 2017

Whenever the Heart Skips a Beat is an exhibition hosted by the local shops at Mehringplatz, Berlin, including performances and workshops occurring in the public sphere. The general idea behind the project is to transfer rituals and cultural practices of hospitality into artistic processes. Works by more than twenty international artists, mostly developed specifically for Mehringplatz, intervene in the public space in the form of performances, workshops, and an exhibition, taking place at the plaza and in neighbouring stores, which turns the store-owners into hosts of the respective pieces. The project is curated by Marenka Krasomil, Gislind Köhler and Arkadij Koscheew.

As part of his first solo show at Tenderpixel, Feiko Beckers will present a series of live performances. He will fill the gallery space with props, objects and a series of stages and platforms that will serve both as part of the events and as installations remnant of the live acts.
Exhibition open Wednesday to Saturday, 2 until 6pm. Live performances on Friday and Saturday every half hour: 2.30pm; 3pm; 3.30pm; 4pm; 4.30pm; 5pm; 5.30pm

Opening of ‘Duplicate (No one will drink the water of your well if you yourself do not drink it)’, Chalton Gallery, 6pm. Exhibition running: 1 – 16 September 2017

Chalton Gallery is pleased to present the exhibition of Byzantia Harlow: Duplicate (No one will drink the water of your well if you yourself do not drink it). The exhibition is the culmination of a nine-month Arts Council England funded project created by Byzantia Harlow in Lithuania, Greece and England through a series of collaborations and workshops. It uses the metaphor of sustenance from an impure source to question what is genuine and what is artificial – whether truth really matters when both can give pleasure.

Image Courtesy of Calvert 22 Foundation and The Smalls

Join us to celebrate contemporary short film and creativity from the New East at this special screening curated by The Smalls Film Festival, whose 12th annual edition we are delighted to be hosting at Calvert 22 Space. The screening forms part of the festival’s Day of Diversity and showcases the breadth of work coming out of the New East.
The Smalls Film Festival is an international celebration of discovery, multiculturalism and cutting-edge independent filmmaking. From 1 – 5 September 2017, some of the industry’s most creative minds are set to take London by storm for a celebration of short film. Full programme and tickets: https://www.thesmalls.com/festival/tickets

What remains of a one-month performance project, including more than 70 international artists and creative minds? An exhibition featuring documentation, props, costumes and traces from LOST SENSES: a living space for encounters, open every day, from 7 August to 4 September 2017. Revisiting the exhibition as format and exploring the gallery space as a fluid cultural site, artists and practitioners worked in close cooperation with people reorganising the self’s relation to perception. LOST SENSES is curated by Linda Rocco.

Published in 1990, Putti’s Pudding was a collaborative artist’s book and ‘final project’ by American writer Cookie Mueller and her partner, Italian artist Vittorio Scarpati. Pairing drawings by Scarpati with short texts by Mueller, the project was conceived in New York’s Cabrini Medical Centre while both were dying from AIDS related illnesses in 1989. At Studio Voltaire, Putti’s Pudding is reimagined as an exhibition featuring forty-five original felt tip pen on notepad drawings by Scarpati, texts by Mueller and other period materials. Additionally, a public programme of talks, workshops and screenings will contemporize the original project, asking how this particular historical moment relates to our own political present. 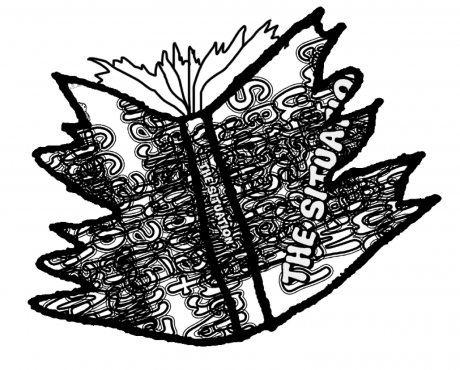 Hannah Black, Some Context (2017). Commissioned and produced by Chisenhale Gallery

Chisenhale Gallery presents a new commission and the first solo exhibition in a UK institution by artist Hannah Black. Black’s methods of production are diverse and reflexive with her prolific output as a writer often providing the basis for video, performance and object-based outcomes. Black’s videos and installations collage autobiographical, fictional and pop cultural fragments to explore theories and histories of race, gender and labour. For her exhibition at Chisenhale Gallery, Black continues to develop her enquiry into the interesting and sometimes painful gaps between practices and theories of subjectivity and collectivity. Black’s new commission brings together a collection of objects (books and other items) made of edited conversations with friends about “the situation”, a theme variously interpreted on public and private, individual and collective levels. The exhibition, itself a kind of situation, will express some hope, some anger, and some exhaustion.

Image Courtesy of The Showroom

The Showroom presents Everything we see could also be otherwise (My sweet little lamb), a contextualisation and rethinking of the Vienna-based Kontakt Art Collection. The exhibition forms the epilogue of a long-term project, which originally took place in Zagreb from November 2016 to May 2017, curated by What, How & for Whom/WHW in collaboration with Kathrin Rhomberg. The exhibition will be a dense installation of over fifty works, both historical and contemporary, incorporating diverse media including painting, photography, sculpture, video, performance and installation, which will be exhibited on the inside and outside of The Showroom’s building.

A polymath and self-taught artist, Gianfranco Baruchello (born 1924, Livorno, Italy) was in dialogue with experimental writers (for instance Italo Calvino and Gruppo 63) while producing sculptural work and then exhibiting paintings, first in Rome and then New York from the mid-1960s. As well as films, he has since made happenings, published poetry, fiction and essays, engaged in radical politics, launched a para-business and run an experimental farm. The exhibition presents works made between 1958 and this year, including large early canvases, paintings on layered acrylic sheets and on aluminium, boxed assemblages, and a selection of film and videos. These will plot a map through Baruchello’s excessive imaginary, where a form of storytelling, critically engaged and often absurd, is constantly re-invented. The exhibition is curated by art historian and curator Luca Cerizza, who is responsible for the Castello di Rivoli Research Institute.

Film still from Christian Nyampeta: Words After the World, 2017. Courtesy the artist

Words After the World is an exhibition, which builds on the recent residency of Rwandan-born Dutch artist Christian Nyampeta (b. 1981) at Camden Arts Centre. During this time, Nyampeta hosted a scriptorium, in which he convened a working group to translate Francophone texts by philosophers such as Alexis Kagame and Maniragaba Balibutsa. This collective structure led to the production of the script for Nyampeta’s new film, which conveys a fictional writer attempting to complete a novella at a time when the use of existing words is restricted by copyright: as a result, the writer is compelled to craft new words in order to avoid both silence and persecution. Nyampeta’s film is presented in Gallery 3 within an installation that he describes as a ‘hosting structure’.