Ruth Ewan (1980, Aberdeen) is an artist whose work is often developing in situ, reacting and realising the context around her. She has produced and taken part in a wide variety of projects and exhibitions which are deemed as ongoing, some from as long ago as 2012, and typically the audience plays a key role in activating and developing the projects as time goes on.

At Tate Britain, under the guise of a typical audio guide, you can take part in a piece called The Darks (2014) which was developed in a collaboration with Astrid Johnson. Recognising the site’s past, as home to a prison, and the philosophical musings of Jeremy Bentham’s panopticon, the artists lead you on a journey led by its former inmates. Unlike most gallery tours, this one leads you outside, alongside the Thames, to one of the few remaining physical signs of the prison itself, the moat. Though the prison has long since been demolished, and replaced, you are left with almost tangible memories of what the place might once have been like for those who were incarcerated there. 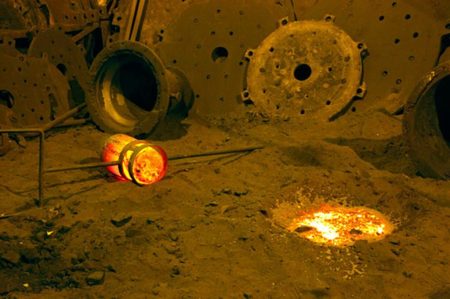 One noticeable element of Ewan’s contextual practice is the dominant positioning of the contemporary notion of time, particularly when put in direct opposition to previous notions that have since fallen back into the past. Her project Another Time (2016-2019) sees a disused meadow whose location can be seen via a link to google maps on her website at the edge of a University of Cambridge, being used as what is referred to as a “test-bed” full of wildflowers. The meadow has been carefully curated by flowering time in a deliberate comparison with our hyper-speed experience in the 21st Century. Influenced by Carl Linnaeus and his book Philosophia Botanica the project was begun in 2016 and will continue until 2019 in a collaboration with specialists and people local to the area. 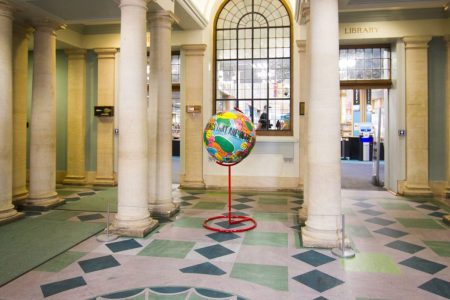 Perhaps her most recognisable work so far was Back to the Fields (2015-2016), which was originally conceived for Camden Arts Centre but later saw a larger presentation at the Sao Paulo Biennial. Once more plant life is placed centre stage, though this time, removed from the natural state of the meadow, the pots and objects were laid out methodically in line with the French Republican Calendar which was in use from 1793 until 1805. This calendar was, and still is to this day, a revolutionary movement away from the religiously influenced calendars. In place of religious nomenclature, days and seasons were renamed after collaboration and discussion with artists, poets and horticulturists. For the exhibit, the 360 objects that represented each day in the year were laid out in order. Amongst them were a turnip, honey, a fir tree, ivy, figs, mercury, lava, moss, an axe and many other plants.

Ruth Ewan lives and works in London. She graduated from Edinburgh College of Art in 2002 and has since taken part in a wide variety of group and solo exhibitions including; All Distinctions Levelled (2016), Focal Point Gallery, Back to the Fields (2015-2016), Camden Arts Centre, How To Make Archway Tower Disappear (2012), Archway, Incerteza viva (2016), Bienal de São Paulo, Brazil, Hidden Civil War (2016), The Newbridge Project, A World to Win (2016), William Morris Gallery and Utopia (2016), Somerset House. 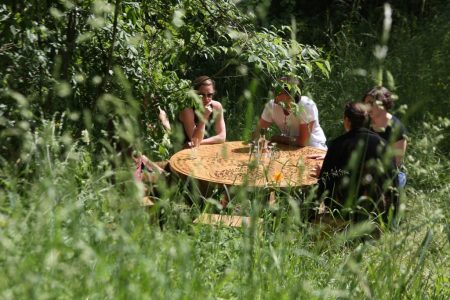 A Bottle and Some Honest Friends (2014), Ruth Ewan, Oak table, Glasses and Schnapps