Surveying the landscape of Mexico City it is possible to categorise the city’s billboards into three distinct breeds. The first beguiles the public into buying new brands of talcum powder, perfume; or a second property, combining everyday essentials with aspirational goals. The second proclaims, with font size 10,000 letters, that they are vacant, up for grabs. The chance for you to make it big! The third and final, deemed failures by their owners, are stripped bare, exposed scaffolding no longer able to turn a profit.

Billboards speak in purely capitalistic terms, all of life’s problems can be solved with the purchase of a new push-up bra for the low low price of 300 pesos. In turn we, the gullible, reply by buying more. Increased sums of money flow into advertising, and the circle of life continues. Hakuna Matata. After years, decades even, of supporting this reproductive feedback loop, the city is teeming with them, legal and illegal; like humans they have capitalised on their adaptability, occupying every imaginable corner. An opportunity cannot be left untaken.

However, amongst the cacophony of corporate slogans, one billboard bucks this ideology by ignoring the economic imperative. On the corner of Avenida Sonora and Nuevo León it stands looking out across a busy intersection and into Parque España. A giant fish out of water, swimming against the tide.

Proclaimed a ‘one-wall gallery’ Sonora 128 stretches 12.90 x 7.20 meters, or 92.88 square meters if you prefer. Organised by kurimanzutto, and programmed by Bree Zucker, it continues the gallery’s long standing battle with conventionality, a legacy of moving beyond the white cube to interact directly with the public, without pretensions or the nervousness that accompanies walking into a high end gallery (past bouncers, cough, Gagosian, cough).

Beginning in March 2016 Sonora 128 has been giving the public, in a partially cover manner (art espionage?), a daily slice of contemporary discourse. Imagine, for example, your morning commute interrupted by a floating agave cactus, leaves extending and coiling around itself; naturally the cactus asks “¿done estamos?”, ‘where are we?’ or ‘where are we at?’ After three months you’ve become used to the cactus and its self-reflexive, existential quandary, but then overnight it’s changed and instead of that familiar face you’re confronted, whilst waiting for the lights to turn green, by ‘Achiote’. Achiote, a little shrub, best known as a source of red pigment: grind it down, mix in a little water, make a paste and paint your face, colour your lips. You probably know something about it from school. But why is it here, transposed into what appears to be the Chiclets’ logo (America’s ubiquitous chewing gum)? Five days a week for the next three months you’ll see that symbol and ponder its meaning.

How many of us ever return to an exhibition? Mostly we make it once; if it’s opening night we might barely see the art work. If you’re writing a review you’ll go at best twice, but it’s much easier to recycle the press release, cannibalise a few insights and exciting words. Sonora 128 is the exception, you go almost every day. 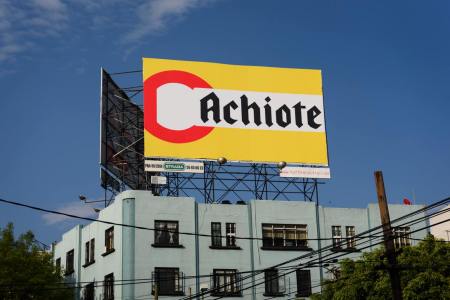 According to Zucker, the location was pinpointed because it’s exactly where the “different organs [of Mexico City] communicate with each other”: young mothers with strollers, and maids walking their employers’ dogs use the park; at the traffic lights children perform acrobatics, begging a few pesos from the stopped cars; in the cafés, restaurants and bars, hipsters mingle; the gas station serves the city’s insatiable appetite for petroleum and in its public toilet the homeless relieve themselves. Thousands of cars pass daily, at rush hour they might wait twenty minutes to cross the intersection of roads. Sonora 128’s location combines commuter passage with leisure, “both short and long durations collapsed into one” as Zucker eloquently surmises it.

Now imagine you’re the aforementioned maid, working for a family living nearby in the affluent Condesa or Roma neighbourhoods. Your Catholicism is a integral part of your life, you go to church every Sunday and each night you say a prayer for your family. With your husband you’ve raised three boys and the first is about to begin university. Each day you walk that yappy dog around the park and pause to take a couple moments for yourself. One day, raised four stories above the street, a giant pair of full bodied lips are suggestively parted, positioned against the sky. Though the image is black and white, it’s clear that they’re painted with thick red lipstick; a set of perfectly white teeth glistens. Billboards regularly use sexualised imagery to sell; the pressure to be attractive is omnipresent. Yet these lips aren’t couched in the usual capitalistic codes. These lips are purely erotic, a bold proclamation of the sexuality of youth and the city. It affronts, yet calls back to a time twenty years ago when you had the power to stop traffic.

Action during May Day march on May 1st (2017), Image credit: Claudia Espinosa, Courtesy of the artist and Kurimanzutto, Mexico City.

On occasion, Sonora 128 spills out into the street: the latest exhibition, Mineva Cuevas’s Paro general (2017), integrated itself amongst the May 1st Labour Day march. Poster versions of Cuevas’s red and black banner, bearing the phrase “If we do not do the impossible we shall be faced with the unthinkable,” were distributed at random amongst the marchers. Liberated from its geographical fixity the show walked with the people, used both as a sign declaring the urgency of change, but also as a sun shade from the intense Mexico heat. Last month Sonora 128 moved overseas. An outreach program to Athens saw a temporary scaffolding billboard constructed at the coastal Faliro Olympic Pavilion for Art Athina. Presented to an international crowd of art connoisseurs, was a snake, its head trapped inside a rusted beer can. The image, by Miguel Calderón, was captured on a trip to the outskirts of Mexico City with the artist’s falconers friends. Coming across the snake, engaged in a Sisyphean attempt to free itself, one falconer concluded that a mouse had been enticed inside the can by the beer, drunk, it had fallen asleep and inadvertently become bait for the snake. However, once the can had been cut open no traces of a mouse could be found. Only boredom could explain the snake’s miscalculation.

Calderón’s image forms a bridge between the two cultures, playing on a shared history of myths and mythologies that still feels relevant to each city. Both Athens and Mexico City are palimpsestic; everywhere, graffiti builds upon old surfaces, politics is written on ancient stones, and at the centre, the cities revolve around monuments to fallen civilisations, the Templo de Tláloc and the Parthenon. The old is “still pulsating within the rush of the present”, yet, despite the vibrancy, economic inequalities, unemployment and boredom, push people towards self-destruction.

There are three more artists schedule to show at Sonora 128 before its two-year tenancy concludes. Each is a “collaboration with Mexico City,” requiring the artist to take the “pulse of our times” and put something back out there for the public to engage with, something that will help a hundred, or a thousand, latent conversations catalyse.

After the final exhibition the future is uncertain. Two years is a good minimum time to test the waters, see what approaches artists take and how the public reacts. Another two years’ advertising time could be booked, or Sonora 128 might move, finding another site in the city and another commuter route to challenge. A transitory approach could be adopted, taking the Art Athina experiment as a jumping off point and finding billboards around the world to utilise. Or maybe it will be laid to rest; enough is enough, there are other mediums to adopt, different forms of communication available for co-option.

Whatever the case, the most interesting facet of Sonora 128 is that it doesn’t announce itself as art. If one day the commuters, the young mums, maids, acrobatic kids and petrol station attendants wake up to find a corporate message selling them the advantages of an exciting new brand of butter, will it make much of a difference? A billboard, no matter what it shows, is a “form of consumer activity”; we ingest the message, no matter what it says. As a medium the billboard is exclusively transitory, ephemeral; by its nature the image changes and we forget what came before. In spite of its size, it is forgettable. To date hundreds of thousands of people have seen Sonora 128, and many thousands more will see it; yet there’s a beauty that no one is necessarily burdened by the knowledge of it being ‘art’. For 99% of the audience it doesn’t enter any canon of public art interventions, it just is what it is, a message for momentary consideration, each time you pass it.

Since graduating from MA Culture, Criticism and Curation at Central Saint Martins he has worked exhibition production on Art Night, a one night contemporary arts festival in central London, and co-curated What Do You Meme?, an exhibition of meme culture. Recently he has co-founded Off Site Project, an online exhibition space.