Matthew Harrison-Lord is holding a virtual interview through an instant messaging platform with LAVERACK. Both artists therefore are allowed time for thought, yet there is instant chronological and informal discourse provided, representing and re-presenting the workings of a non-virtual discourse.

Matthew Harrison-Lord: Hello LAVERACK, I am almost ready to start the interview, I must think of my last question and I am unsure which order these questions are going to be asked in. I know I’m sending this message slightly early, but I just thought I would tell you that I am almost ready.

Hi LAVERACK, I am now ready to start the interview, whenever you’re ready.

LAVERACK: Good morning, I am ready for the interview, I hope you’re well.

I have just realised that my introduction has provided context for those reading, that we have arranged to speak in the morning, however, they might think it’s early in the day as opposed to being 11:55.

MHL: You’re right, I’d just like to thank you again for accepting my interview for Curating the Contemporary. So, let’s get straight into it: could you provide readers with a brief explanation of how you ended up making Paper Series (2016).

L: My practice is always changing, I was obsessed with oil paints and giant canvas works from my training and art school days, then I moved to London and had a studio where I spent most days developing contemporary canvasses featuring townscapes and geometric shapes. This work represented my context, the buildings of London and the nature of London – then catastrophe and change came about in a few short hours; my studio in November 2012 caught fire one evening. I received a call and by the time the fire service had put the blaze to an end, my works, archive, studio and everything was burnt to the ground and destroyed.

Since, I have created digital works; works to be archived online; to be placed in the realms of virtual clouds and online portals. Therefore, photography, video and performance for video are the mediums that I am making work in now. The Paper Series referenced three core academic essays are influential in my process of making art. These three papers were represented through performative interpretations and debuted at my solo exhibition L’Exhibition (CASC | Contemporary Art Space Chester, Chester, 2016).

MHL: I am sure that the fire was emotionally draining for an artist to go through, and I can now understand why you now create virtual work. Obviously, I know your work, but could you describe the three academic papers that you have interpreted.

L: The ‘Paper Series’ came about through a development of my institution: The LAVERACK Institute for Performance Art which is a school that provides students with an understanding of performance art in both performance making and theoretical underpinning. These three papers created the stimuli and basis for the works and are the core papers that I provide to my students. They are:

Reading these three papers helped me understand how audiences read work, along with my literal framework of creation, meant that I decided to represent the three papers. The other works were ‘A 1000 Potatoes’ whereby I represented the paper by peeling 1000 potatoes over three days, and ‘Uncanny’ by Freud whereby I un-canned Campbell’s Soup Cans and then re-presented the action incorrectly in a second performance – un-canny, but not quite.

MHL: Could you explain how your interpretations came about? I’m interested in ‘Breath of the Author’ as the first in the ‘Paper Series’.

L: Most of my works use phenomenological properties to allow myself to interpret works, and to open the interpretation of my works to those receiving / observing / participating with them. The first of this series was ‘Death of the Author’, where Barthes provides (admittedly he is completely contradictory and creates a paradox within his comments) the notion that once the author has published the work, it is no longer up to that author to state what the work is about. As a performance artist, I employ this concept in my art, so to quote Barthes directly:

I wanted to provide a work that allowed this to be at the forefront of its concept, therefore I interpreted the paper through performance, I decided to edit it – changing ‘death’ to ‘breath’ and ‘dead’ to ‘bread’ – I also used a custom made breathing tube to type the essay, and ate art-isan bread in the middle of the work.

“the birth of the reader must be at the cost of the breath of the Author” (LAVERACK, 2016).

MHL: Why have you chosen the medium of performance for video as your representation of the paper?

L: I spent three hours typing an academic paper whilst collecting my breath for video, this is a digital medium, it is liquid, it is fixed in time, yet fixed to no physical object or material. I am using my body which is the most lived medium only to be witnessed and experienced by the audience in the virtual and digital, through the power of the pixel only. This was a performance for film that represented the paper, as soon as this video is presented, I lose authority on how people view, interpret, relate, and respond to the work.

My interpretation is ‘Breath of the Author’ – typing of the exact same essay, but with the word breath replacing death and a few of the sentences changing to respond to breath. This act highlights and represents that the work no longer is Barthes but mine, the one re-presenting. But it also creates an artistic paradox, because this time it relates directly to me as an artist, I am collecting my breath and preserving it, capturing it, making something that is ephemeral enduring. Ensuring that my DNA, my bodily functions and exhalations are captured alongside the typing / authorship of the work, when the works original essence is to state that authorship is losing authority when the audience reads / sees / interprets.

‘Breath of the author’ is, at the heart of the work, about audience interpretation. The work moves to the next level conceptually with the inclusion of audience and their interpretations of the work. It’s a work to a score, it is for the audience to represent and re-present themselves if they wish.

MHL: So, let’s focus in on the differentiation between representation and re-presentation. Why is the use of this heteronym of such importance to your work Breath of the Author?

To clarify, representation of a paper is a process of creating work that is more than primary mimetic representation (that of theatre), which imitates or reproduces the words or repeats the living world; representation of the paper for me is taking the essential principal of the words and understanding the authors intensions, values and interests and ensuring that these are understood again in a new light, to a new audience, with a new context. It is to provide a response from the viewer that deepens discourse, it does not have to re-enact the exact. It’s about an essence, an aura.

Re-presentation of a paper is the action of typing the paper, and it is the action of filming and digitally re-disseminating the work across the world. It is not the notion of understanding of the work, it is about positioning it on an accessible and virtual platform that provides the work to be seen in a new light, with a new audience, and in a new context. These works I have created in video form, the fact that the work is virtual ensures that it is re-presented every time the work is watched digitally. Whether showcased on a television screen in a gallery in Chester, or when projected at the Royal College of Music in Stockholm, or when someone clicks the link from this article from anywhere in the world. A video can be re-presented numerous times, whereas a live event is ephemeral and only happens once, a video work can be re-performed: it plays in the contemporary sphere forever.

Regarding Breath of the Author, the concept of the paper is the understanding that the authority of a text is not with the author, but with the reader. Therefore, the video work I created holds the same sentiment, it circulates now in re-presentation and representation of the original paper, alongside the paper, and of the readings from viewers of this and both works on an equal plateau. 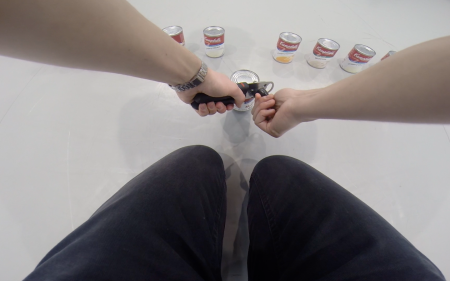 LAVERACK (U.K.) is an internationally known artist who has exhibited photography and video work in Chicago, Stockholm and across the U.K.. He lost many of his works in an unfortunate fire in 2012 and so has since become obsessed with the ‘benefits’ of digital works. He is the founder and Director of the LAVERACK Institute of Performance Art in Sheffield, U.K. – a school for post-graduate students developing in performance art. He has text and image works published in CA Magazine, Average Art Magazine, A5 Zine, and is the cover of WOTISART Magazine April 2017; he also has two text works in NEWSLETTER: Issue XXI, March 2017 by UnitedProject, USA.

Matthew Harrison-Lord (U.K.) is an artist and performer whose practice is playful, personal and parodic. He has performed internationally across the U.K., Italy, Spain, Portugal, and Germany; most notably: Tate Liverpool, The Whitworth, Palazzo Lucarini, and MMK. His works use informal conversations or direct forms of interaction with spectators with the critical framework of using play as a direct way to critique dominant hierarchical forms of power. Matthew has worked with his friend Franko B and Franko currently has one of Matthew’s canvas stitches in his collection. Matthew Harrison-Lord is also currently a visiting-lecturer at the University of Chester in Performance Documentation on the Masters Programme.