As the 21st Biennale of Sydney is approaching an end, one of the highlights amongst the many artworks exhibited throughout the various locations is Drowned River Valley (2018) by Yasmin Smith (the closing day of the exhibition is 11 of June, so hurry up!). Australian of origin, Smith (1984, Sydney) travels extensively to develop research towards the realisation of ceramic installations made with both organic and inorganic matter, found materials and clay (often locally sourced). The scope of her practice, however, goes far beyond the mere manipulation of the materials to encompass a reflection on the history, ecology and culture of the places she encounters. Her contribution to the Biennale, for instance, unfolds between two different sites on Cockatoo Island, in the form of a clay workshop open to the public and a large-scale installation in the former Timber Drying Store, which displays objects resulting from the glazing process in the studio. At the core of the work is the local presence of salt, harvested from the waters around the Island and from the ashes of Avicennia marina (grey mangrove), a plant living in the saline conditions of the Parramatta River.

Site-specificity and community engagement are recurring aspects of Smith’s artistic endeavour. For the 2015 exhibition Ntaria Fence at The Commercial, she spent several weeks living alongside the Hermannsburg Potters community in the Northern Territory of Australia, about 130km west of Alice Springs, to work on the Old Church Project. The configuration of the desert and its natural components, including branches and iron-rich ash, informed a process-based installation, which reflects on the life-cycles of the landscape. The work is the result of the artist’s experience of the place as she gathered elements from the most significant spots and situations encountered during her visits. 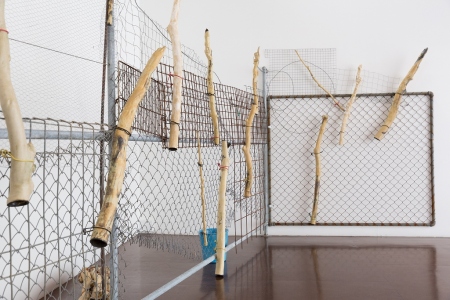 Her work further shows a concern with formalism, manifesting through the industrial aesthetic of ceramic objects, which resemble still lifes in a constant tension between vulnerability and strength. The serial sculptures belonging to the body of works named Apprentice Welder (2013), for example, recall the legacy of Minimalism for their colours and essential shapes, establishing a dialogue with the architecture of the space in which they are exhibited.