Art and illusion may be said to go hand in hand. The artist is both alchemical creature and creator, taking one set of things and turning and transforming them into something other, something else. Matter, material, form, transform, transformed – paint, paper, matter, identity, reality – all can be twisted and manipulated in the hands of the artist; constructed and created surfaces and substances become material, becomes matter, becomes real, realised in the hands of the artist. Matter, matters.

Byzantia Harlow performs and sustains just this type of alchemical a/illusion in her spring show at Yamamoto Keiko Rochaix, ‘From the same source I have not taken’, where she interweaves narrative and form to (per)form a compelling encounter with the un/real – transfixing and transforming viewers and participants in her constructed ritual alike. Here, in the space of the gallery, she acts as artist, oracle and medium; shades of Scheherazade, Delphi and Arachne dog our encounter with the forms she creates and the narrative she spins and weaves around us. Her work transforms the space of the gallery but remains something apart, something other. The work defies an authoritative encounter of viewing and viewed, presenting instead a sensual, seductive, dream-like encounter that works at once to enhance and elude a visual dialogue with the work, lingering at the edges of smell, sound, and dreamscape – like something half remembered or almost forgotten.

Like the artificial, glazed, flocked, organic forms of the tree-like, crystaline sculptures she places in the gallery space, the work is both real and realised, existing as hypernatural forms. They are emphatically based in the natural, the organic and the experiential, growing from the gallery floor like stalagmites, rooted as if they are trees. The sculptures look like they have been formed there over time, the slow-grown accretions of Spitalfields art(ifice), incorporating the dusty detritus of former works in their molecular surfaces drawn from the corners of the gallery. They stand, (un)natural in their stillness, inviting us to acts of remembering and forgetting, displaying their sinuous and slippery relationship the mysterious ritual(ised) liquid which flows through all the material iterations of Harlow’s work. Form, liquid, pool, source, substance. The leitmotif of permeable, transformative substances is echoed across the work, presented and preserved by the sculpted forms which have taken root here, in this space – drawn and distilled and crystallized by the performance and ritual that surrounds them.

The sculptures, placed against the surface of the pink painted gallery walls (displaying a ritual costume and flocked patches, radically altering its former white-cube self) are uncanny. They are both of the world and outside it, outside of time, formed and sustained by an unknown source. Defiantly organic, despite their origin in art. Glazed in unnatural psychedelic colours, their seductive mauve and pink and teal hues contrast sharply with their natural forms, and the perfect, meticulously cast bronze mushrooms and poppy seed heads that grow from their multi-coloured, textured surfaces. These forms, mineral-like, chart a path through the gallery’s upper room, their shifting patinas changing from glossy glaze to velvety flock to bronze fungus and flora, inviting the viewer to peer closer, to exclaim over sculpture and surface and mushroom and seed head and texture; however, in looking, inward looking, the viewer becomes aware of the darker, mythological aspect of these works. Trapped in the crystalline structures, beckoning to the pools of glaze and suggestive substances of the psychotropic dark-loving, mushrooms, the dream-inducing, vision giving poppies, which also scent the gallery, and the predatory, seductive, mossy decay of the flock, are disembodied hands, caught in the form of the tree/rock/crystal. 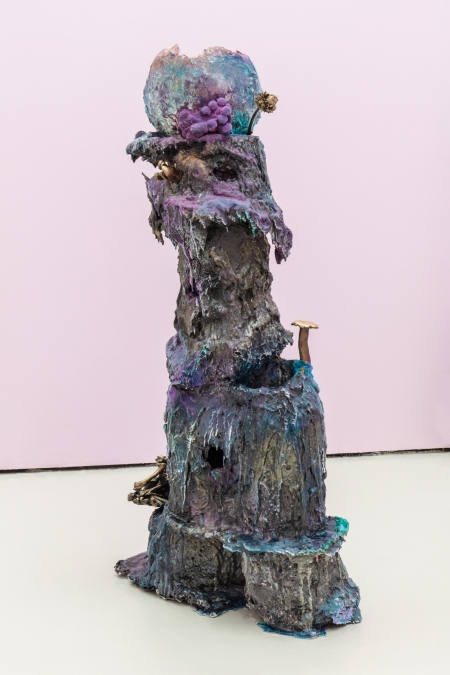 These sculptures, with their striking contrasts of organic and man-made, transformative and transformed qualities, act as the introduction to Harlow’s multi-layered work for Yamamoto Keiko Rochaix, part of an installed performance that comprises sculpture, video and ritual. Through these, Harlow offers visitors an encounter with a narrative centred on ritual performance that blurs the lines between fact and fiction, myth, the experienced and the imagined. Her work builds on ideas of moment, movement, change, corruption, participation and transformation, creating a dreamlike, trancelike space in the gallery. Indeed, blurring, of boundaries, realities and vision is a constant here, recalling the parable of Mark 8:23-25, where a blind man is given sight, but, at first, imperfectly so – seeing human forms as waking, walking trees. Through her sculpted forms and the collaborative video work she allows her viewers to access a mysterious and enigmatic happening – filtered through video and sound, partially performed by her actions, and partly by the organic sculptures which inhabit the gallery space. Her works behave as both witness and agent in her narrative, at once mistily familiar and eminently strange.

Harlow’s practice encompasses a diverse range of references and media, drawing on her interest in faith, belief, trust, ritual, replication and the gap between real experience and artificial effect/affect as it is perceived and performed by the artist, the work, and, ultimately, by the viewer. The sculptures she has created for this exhibition are ephemeral, beguiling, and oddly forbidding. They tell a story of transformation and transfiguration, drawing on classical myths such as the unhappy transformations and fixations of Daphne and Narcissus, but one that is glimpsed here through a contemporary mauve-tinted, poppy strewn, incense-scented lens. The bright pools of glaze, the tactile flock, the sensuous bronze and the entrancing, fleeting ritualised images of the film projected onto a brass circle which seems to float from the walls, lend her work a seductive haziness. The images and forms she creates hover, half recognised and half remembered from other places and other narratives. The bells and smells and tastes of the performance in the gallery echo the ritual spaces and actions of the film, melding and merging and meshing with the mysterious pools and liquids held by the sculpted forms. Drink the Kool-Aid? 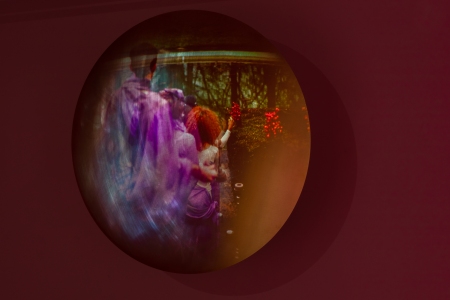 The core narrative of this multi-layered work is drawn from Harlow’s intimate observations of group behaviours and practices of various spiritual, religious and psychedelic groups; of healers and of current and ex-members of the types of groups some refer to as ‘cults’.  Blending the natural and the supra-natural, this work asks the viewer to take a leap of faith, to follow Harlow through the labyrinthine structures of sculpture, of social performance, and of constructed narrative. Finally, the viewer follows the artist, her sculptures and the participants in the performance through the space of the gallery and through their perceived transformation, experiencing a reflected moment of chance and change, opening the door to both possible enlightenment and potential (dis)illusionment.

Flowing past the sculptures, and beyond the space and time of the performance at the opening, where visitors are directly invited to participate in the types of ritual monumentalised by the work, the exhibition goes underground, where the film work is displayed and where the final installation awaits.

The film blends archetypal images drawn from ritual group behaviour, with genuine rituals and healings being performed alongside choreographed motions and moments. Its entrancing, trancelike quality and particular colour palette provide an endless wheel of images and actions, glimpsed here in the gallery on a brass circle, which further diffuses the images for the viewer. The film is a collaborative work by Harlow and Orlando Cubitt, with cinematography by Suresh Kara. This is set against a score which includes a song written by Johnston Sheard, and performed by Sheard, Harlow and some of the participants in the film. The film itself was shot at Harlow’s family home, designed by Amyas Connell and Bernard Ashmole, the building itself providing structuring geometric symbolism that inform, foreshadow and support the actions of the filmed ritual, as did the personal ritual objects carried by each participant in the work, all of whom have genuine experiences of alternative groups or interest in spiritual and ritual practices.

Sculpture, film, performance, ritual. All present an uncanny, unattainable beauty to their viewers, with themes of things transformed, transfigured, changed by liquid or organic matter; however, this is not without a sinister undertone. With these images, forms and actions come ideas of unreliable narrators, group illusions, delusions and fictive experiences – what, exactly is the Source and what is the ultimate transformation offered here? Seen through pink hued, flock decked patinas and beguiling surfaces, the mysterious ‘tree forms’ which hold the liquid at the source of the ritual merge with the mechanical actions performed by the human participants in the work, asking and performing these and other questions – and at the centre of the whole there is an uneasy feeling of tainted beauty or toxicity, and an (im)balance between reality and fiction which keeps the viewer poised between imagined effect and debunked dream. To question too closely whether the whole is real or unreal misses Harlow’s point, however, as the point is the beauty and the experience, however it plays out for the individual. Ultimately, the show presents us with seductive forms, but forms which despite their beauty are not benign, prompting us to inquire whether poisoned chalices can sustain, and if so, can they sustain something pure?

Meg Boulton is a freelance Art Historian, lecturer and writer who divides her time between York and London. Her research is focused on conceptualisations and actualisations of place and space, with further interests in the sacred, the uncanny, phenomenology, collections and containment. Upcoming projects include work on Inuit maps, and a paper on the visual construction/s of Hell on medieval sculpture to be given at UCL in June.