Jack O’Brien’s Chew, if only you could see is the latest instalment at clearview, a small space hidden near the back of an industrial lot in Tottenham. Opening in 2016, the team is composed of seven curators who work as a collective to devise each show, describing the gallery as “a residency program, a project space, a series of events and a collective, dedicated to the vision of invited practitioners. clearview is not a game.” The gallery itself is bright, a high-ceilinged room with four small staircases in each corner. The hard, geometric lines of the staircase rails and the zig-zag of the ceiling create a bizarre effect of a seemingly symmetrical space that is in fact full of asymmetry. Small alcoves of slightly differing sizes sit beneath the stairs, making tiny sprouted spaces off the main hub which my friend and I stood inside of and chatted. The hard lines created by these fixtures and enclaves is then attractively thrown into relief by Jack O’Brien’s work, all curves and swooping lines, a distinct materiality made evident by the loose, black strips that cut across the bright, white of clearview. This gallery, like several others that have recently formed in London, is a residential space where the curators live and which they subsequently decided to turn into a platform to exhibit artworks. 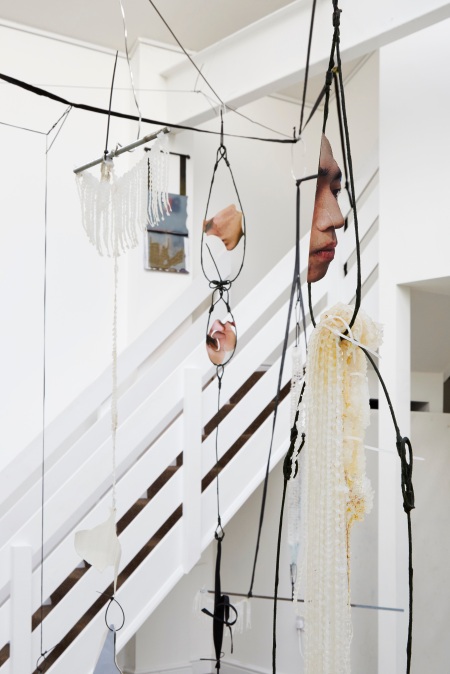 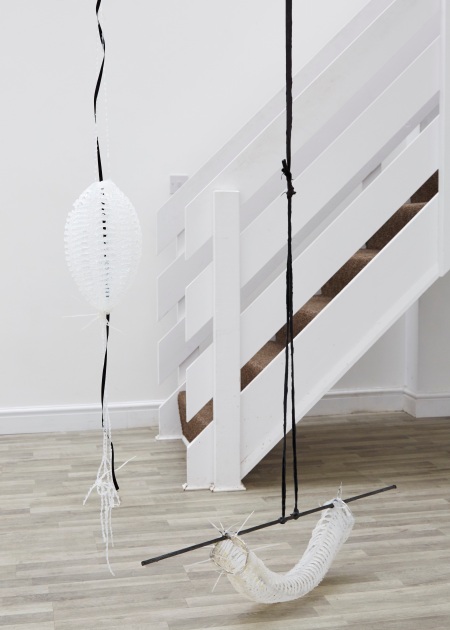 Chew, if only you could see is primarily suspended across the main space as thick, black elastic loops and connects one staircase rail to the one diagonally opposite. Off of this loose structure, which dips and tangles, are fragments of texture that hang, some almost reaching the floor whilst others remain at your torso. They include magazines pages, cut in thick chunks, able to cling together under the light yellow emulsion that covers it – clumps of dripping, light, wax-like forms, small globules the colour of semen, that feel like rubber – loops of studded, black leather and rings of thick black wire that form organic looking chains that hook into other small objects, or bend and curve like whips, peppered with tiny nooses. The effect is somewhat subdued by the muted colour palette, but also erotic and playful. The install that cuts across the space makes the work into a large mobile that one must weave in and out of for a game of looking, especially appealing for those interested in light bondage aesthetics. One is thus made to experience the work by moving in and out of its airy folds, turning through its multiple limbs, caressing its skin with your eyes and body. The title suggests this haptic relationship, the discord it implies between chewing and seeing perhaps a reference to the affective charge that moves beyond the visual plane and into a corporeal to-and-fro.

Standing at the edge of the room, I am frequently reminded of Duchamp’s The Bride Stripped Bare by Her Bachelors, Even. There are moments in which the correlations are easy to spot: the mobile like install and the structure depicted in the bottom half of Duchamp’s work, the rounded edges of the waxy clusters and the cloud like shape, the cut-out magazines and the cut-out like shapes inside of the cloud, small oval frames hold onto smashed glass, precarious but mostly intact like The Bride’s frame. Both to produce no glaring colours and simmer with erotic charge in a balance between affective signals (the titles, the interactions between organic shapes and harder structures) and a holding back of obvious representations of actual figures or bodies. 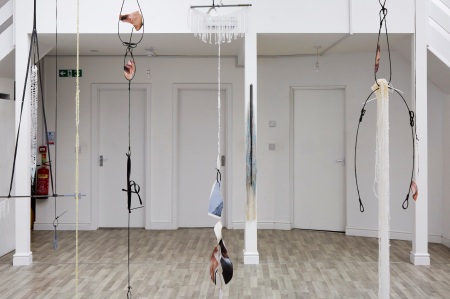 There is another piece, an A3 sized rectangular work, mounted onto the wall to the right of the entrance. With no leather or elastic to tether it to the central body of the work, it feels a little isolated and I don’t approach it. Instead, I watch a couple finger the layers of cardboard that make up its structure. They peek into the dark slivers between each layer of paper and have a private conversation by this satellite piece. Like the cubby-holes in the room, perhaps this is breathing space on the outer orbits of the sexy world that throbs in the centre.

Jack O’Brien’s Chew, if only you could see is at clearview Gallery till the 8th of April.

James Lawrence Slattery is an artist, academic, and critic living and working in London. Their main research centers around queer attitudes, neoliberal subjectivity, and film analysis. Upcoming projects include a paper titled “The ‘Aletheic’ Gaze as Queer Vision” to be presented at the Film-Philosophy Conference 2018 at the University of Gothenburg, Sweden and an essay for Montez Press titled “Identity Politics and Capitalism: A Love Affair” to be released at the end of April 2018.

All images: Chew, if only you could see, Jack O’Brien, 2017, clearview, Photo: Corey Bartle-Sanderson. All images copyright and courtesy of the artist and clearview.

One thought on “Jack O’Brien: Chew, if only you could see”