In the mid-1940s, French painter Jean Dubuffet coined the term Art Brut, or ‘Raw Art’, which he conceptualised as works of art that were in their organic state, untrammelled by cultural and creative influences. Art Brut grew to encompass a variety of practices including Marginal Art, Folk Art, Naïve Art and Intuitive Art; genres which are now united under the contemporary umbrella of Outsider Art. Producers of these works were untrained artists often marginalized from society due to functional diversity, with little understanding of the concept of an art gallery. This type of self-taught creative practice had always existed on the periphery of established fine art academies, however society’s metamorphosis into Modernism, and the movement’s inclination for experimental forms of visual representation, prompted Outsider Art to emerge as a valid discourse in the Western art historical canon.

Now, in the twenty-first century, our culture has a heightened awareness of social responsibility, and Outsider Art is viewed as a catalyst for challenging the stigma associated with functional diversity. The transition away from the negative implications of ‘disability’ and towards the inclusive expression of ‘diffability’, which recognizes the differences of all people, is currently being initiated in Australia. Its city of Melbourne, Victoria is arguably the arts capital of the nation; a title supported by the presence of QArt Gallery, one of the few commercial Outsider Art institutions in the state. Eighteen local male and female artists are represented by the gallery, all of whom have varied physical and intellectual capabilities. The spectrum is vast, including Down syndrome, autism disorders and dexterity impairments. What makes this project exciting is that the artists have diverse views of the world and they all express it differently in their work. Jordan Dymke, one of the represented artists, believes that institutions like QArt Gallery are valuable incubators for the dialogue surrounding society’s preconceived attitudes towards artists – and people – who are different. He says, “Disability is a condescending word. It means, ultimately, that a person has no special talents. I think the word has put us in a box.”

It’s important to note that QArt Gallery is part of the Endeavour Foundation, which is an independent “for-purpose” organization that provides support and services for functionally diverse people across the east coast of Australia. Operating as a disability enterprise in partnership with the Australian government’s National Disability Insurance Scheme (NDIS), the charity is structured with members rather than shareholders, allowing any financial surplus to be reinvested back into the gallery and its other subsidiaries. 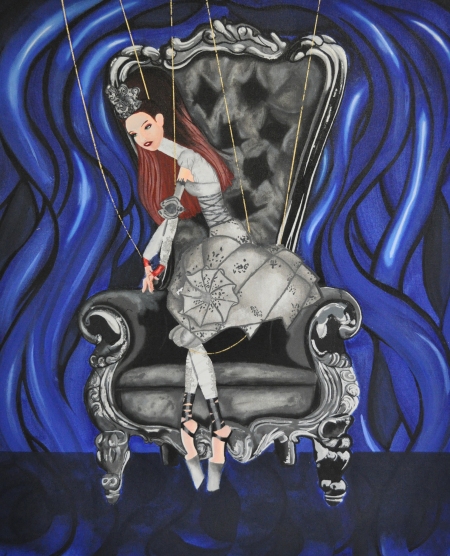 The artists work in a purpose-built studio, respectively named QArt Studio, located a short drive from the gallery. It’s no different to any other workshop – sprinkles of acrylic paint stains embellish the room, visual diaries lay strewn across benches, and overarching values of community and companionship bring warmth to the workplace. Here, the artists are offered access to painting, drawing, ceramics, textiles and design technologies. Artist Holly Walton says, “Working at QArt Studio means that I can create worlds, people and life in my own perspective.” The artists’ works are also used for mass produced merchandise including greeting cards, acrylic tiles and limited edition prints. “I love seeing the reaction of first time visitors to the gallery and studio”, says Jan Rowlinson, the QArt Studio manager. Rowlinson, a graduate of a BA in Fine Art from the University of the Witwatersrand in South Africa, began as a volunteer with the organisation and has been the manager of the studio since 2012. She continues, “The public is greeted by vibrant colour, a salon-hang display of paintings, unusual ceramics and handmade jewellery… And then they learn that it’s all made by differently abled artists! It completely changes their view of what people with functional diversity can do. The delight and respect is obvious.” She continues by saying that she doesn’t want QArt Gallery to be viewed any differently than the big institutions who exhibit the likes of Claude Monet and Jackson Pollock. “We set a very high standard. Our work is professional and contemporary.”

QArt Studio also employs an established, trained practitioner who assists the artists in developing their individual oeuvres. Rowlinson says, “Gordon Hayward, our studio supervisor, along with our volunteers work with the artists, teaching them new techniques and assisting with creative direction.” It is great for the artists to feel that their studio and work is commercially successful, which, in turn, further contributes to the impact that the organisation already has. “The gallery is a really great way for the organisation to showcase the talent that people with diffability have”, says Dymke. “In other words, it lets us run with the big dogs.”

Instead of earning a commission on sold works, the artists are paid a weekly wage in accordance with their time dedicated to artmaking. Whilst this arrangement has been critiqued by some members of the public, the fact is that the salary is essential; it allows the artists to maintain secure and ongoing employment. According to the Australian Senate Estimates from 2014, the Australian government invests $750AUD million into Disability Employment Services (DES) annually. The DES assists functionally diverse job seekers and also provides support to employers in hiring differently abled people. However, only 3% of employers make use of the DES when recruiting. And sadly, only 30% of functionally diverse people who obtain employment through the DES keep their jobs after six months. Dymke says, “Most people say that I don’t have a disability, I just do things differently. It might take me longer to do something, but I will get it eventually.” We can’t simply create patchwork solutions to solve these issues. That’s why QArt Gallery’s purpose and strategies are to be revered; they are an excellent example of how to provoke change, not only within the commercial art world, but also in challenging the wider social, economic and attitudinal factors that contribute to the prejudice and unconscious bias faced by differently abled people on a global scale.

Whilst the early study of Outsider Art could be criticized as the fetishization of the ‘other’, at its crux is its authentic and pure form of creative expression. With our world’s greater understanding of critical social theory, intersectionality and accountability, the artists at QArt Gallery have been able to reclaim and reappropriate the term Outsider Art, separating it from its pejorative. By championing ability, the institution’s unique structure has been able to transform the genre of Outsider Art into a practical channel for the complete reform of society’s perception of diffability. QArt Gallery has been able to give local functionally diverse artists the opportunity to maintain secure employment, live engaging lives in the community, and most importantly, a commercial gallery space to showcase their work; a chance they may not have been able to experience elsewhere. After all, perhaps we are viewed as the outsiders, the voyeurs granted the privilege of peering into these unique and distinct worlds.

You can view and purchase works by the QArt Gallery artists at https://www.qart.endeavour.com.au

Natalie Bradvica is an arts writer based in Melbourne, Australia. Graduating with a BA in Art Theory from the University of New South Wales in 2017, she is now working as a gallery manager in the not-for-profits arts sector whilst completing her MA in Art Curatorship at the University of Melbourne.