With an approach to filmmaking similar to bricolage, director, writer and theorist John Akomfrah (b. 1957, Accra, Ghana) mingles fragments of memory and history to generate new narratives. For over 30 years he has explored the legacy of African diaspora in Europe and the USA, producing films that look into the history of ostracised societies.

Son of two political, anticolonial activists, he arrived in the UK from Ghana at the age of four. His personal interests, life experience and education – Akomfrah graduated with a degree in Sociology from Plymouth Polytechnic in 1982 – brought him to develop a curiosity towards the medium of film to express the complexity of overlooked perspectives and alternative viewpoints in history. With this in mind, in 1982 he co-founded the Black Audio Film Collective with fellow artists David Lawson and Lina Gopaul, active until 1998. BAFC aimed to foster a black-driven culture of moving image film in the UK. Their pivotal production was the 1986 film Handsworth Songs, presenting a deconstruction of the riots that took place in Birmingham and London in 1985, through a mix of broadcast news footage, still photography and audio montage. The film established the trademark of the multifaceted visual style, for which Akomfrah is still recognised today. 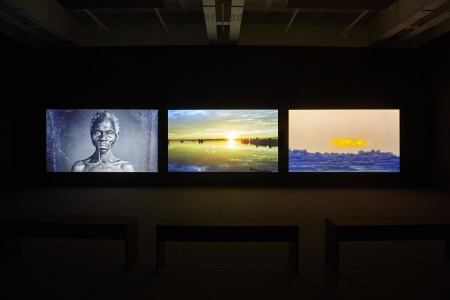 Undoubtedly, one of his most astonishing works is Vertigo Sea (2015), a three-screen film installation exploring ‘the sublime seas.’ Merging archival material and new footage with classical references, the film highlights the terrific nature of the sea and its relationship with people, be they victims or perpetrators. Shot on the island of Skye, the Faroe Islands and the Northern regions of Norway, Vertigo Sea is based on Herman Melville’s Moby-Dick (1851) and Heathcote Williams’ epic poem Whale Nation (1988). In particular, images depicting the brutality of the whaling industry are contrasted with scenes of migrants crossing the ocean in search of luck and a more decent life. Conveying notions of displacement and mass migration, Akomfrah therefore addresses the current refugee crisis, in such a way that the visual experience remains predominant over the act of preaching a judgemental message. Notwithstanding, the viewer is left with an overwhelming sense of discomfort and restlessness, which with no coincidence recalls the perturbing motion of the sea. Vertigo Sea has been exhibited in many locations in the UK and abroad, yet one of the most fascinating presentations was that within the exhibition J.M.W. Turner: Adventures in Colour, displayed at Turner Contemporary in Margate between November 2016 and January 2017. On this occasion, Akomfrah’s installation was shown in conversation with Turner’s The Deluge (1805), a masterpiece of the artist depicting the dark scene of a tsunami. Here, the dialogue between historical and contemporary expressions worked greatly to address the catastrophic intensity of nature in relation to human beings.

Other remarkable works include the installation The Unfinished Conversation (2012), a portrait of the cultural theorist Stuart Hall; Peripeteia (2012), a fictional drama on the lives of individuals in two 16th century paintings by Albrecht Dürer, and Mnemosyne (2010), which tells the story of migrants in the UK, questioning the idea of Britain as a promised land, where financial worry and casual racism can instead be real threats. 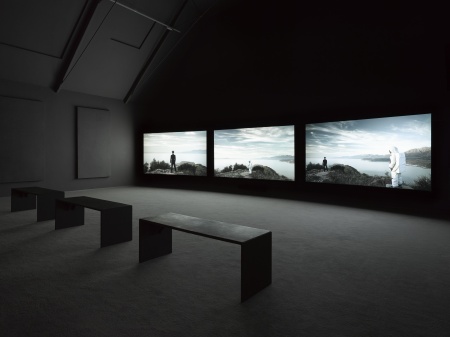 For the month of July, CtC will present a selection of John Akomfrah’s works on the Facebook and Twitter pages.