Situated in a verdant corner of Parque Chapultepec, Mexico City’s largest green space, Museo Tamayo is hidden amongst the surrounding foliage, until of course you make your way through the trees and are presented with its angular, modernist, brutalist form. Inside is no different: the space is continuously complex, a mix of open caverns, exhibition halls, shafts of light, incisions through walls, levels, half-levels, textures and angles. After-hours, it would be an ideal gallery in which to play hide and seek, or as Mexico artist Fernando Ortega, has done, hide his work.

Nota Rosa is less of an exhibition than a set of situations designed to be overlooked. Each of the three points of interest are cunningly integrated into their surroundings, employing the camouflage of ‘hiding in plain sight’. Once uncovered it becomes apparent that these works form an ingenious circulatory tour through the museum, readable clockwise or counter, with no well defined start or end point.

Beginning at the most apparent point, the vinyl exhibition text, it makes sense to move counter-clockwise through an underground passageway painted entirely in pink. Crazy for pink (2016) serves as an introduction to the thematic colour of the show; yet surreptitiously another idea is being introduced. At the entrance, a TV monitor displaying a surface of identical pink is easily passed, though a more attentive glance reveals a mosquito caught in a loop. Permanently trapped within the painted surface its elongated articulated legs gesticulate wildly in an attempt to free itself, animating a desperate struggle into a comical dance.

Recognising the potential for an insect to become trapped in a layer of setting paint it is easy to imagine another trapped in the colourful pink purgatory expanding through the passageway. What is at first readable as exotic and happy becomes tinted with the potential of death on a minuscule scale.

Up a short flight of steps into Museo Tamayo’s permanent collection, it appears that Ortega’s exhibition is over. However, hidden amongst the big ticket artworks, wedged between an O’Keeffe, a Bacon and a Motherwell, is Post it (2016). Solely signified by a stipulated clarification that reads “Esta pieza no forma parte de la Collectión Museo Tamayo” the pair of photographs seem to be missed by most visitors. 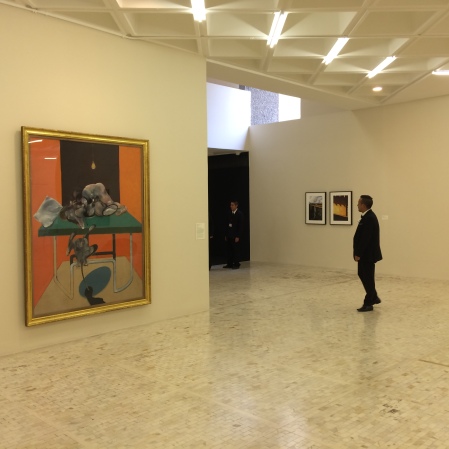 In these images Ortega has commissioned a graffiti artist to shimmy his way across a chasm-spanning bridge in order to place a single pink post it note directly in its centre. One innocuous act is hidden innocuously in the gallery, a subtle intervention in space squared.  The tiny note of pink forms a delicate thread between Crazy for pink and Post it, so translucent that like a spider’s web you can break it without noticing.

Continuing round into the museum’s atrium, it now becomes apparent what seemed at first to be part of museum maintenance is in fact the final (or first) part of Nota Rosa. Extending the dizzying height of the room, a single ladder extended to its limits reaches the ceiling where a pink balloon floats against a skylight. Rosa subido (2016) balances perfectly between what appears possible but on second thought makes no sense. If a balloon rose to the ceiling would museum staff erect such a precarious ladder to remove it? Probably not. The balloon would eventually deflate[1] and no technician would need to risk their life to retrieve it.

The three pieces comprising Nota Rosa are united by two minuscule gestures, a tone of pink and a hint of death’s presence. A mosquito fights for its life, a graffiti artist shimmies his way across a perilous drop and a hypothetical art technician must retrieve a balloon from the ceiling. Each instance fluctuates between a sense of the accidental and the deliberately  choreographed, and when viewed as a connected narrative structure, hints towards the poetics in everyday phenomenons.

[1] Incidentally  something wonderful and funny happened as I was about to leave the gallery. The balloon actually deflated and slowly worked its way down towards the entrance, where gallery staff were unable to stop two children taking it; and proceeding to chase each other about completely unaware that they were holding an artwork – albeit, not a very expensive one!

Since graduating from MA Culture, Criticism and Curation at Central Saint Martins he has worked exhibition production on Art Night, a one night contemporary arts festival in central London, and co-curated What Do You Meme?, an exhibition of meme culture. Recently he has co-founded Off Site Project, an online exhibition space.