The Crying Game is a series of conversations with artists whose work evokes senses of nostalgia and with it notions of sentimentality and an exaggerated tenderness or sadness for the past.

For this first instalment, curator, Christina Millare chats with with Nagisa Sugao the choreographer of crewimburnny, a performance collective based in Japan. The group approach the movements of women from two varying frames of reference: the delusional fantasies of boys and the aesthetic viewpoint of girls. In their performances, crewimburnny depict the dreams, reality and emptiness which lie between these two perspectives combining feminine movements with ironic venom to captivate the audience and immerse them in their crewimburnny world.

Born in Osaka, Japan, Nagisa Sugao studied dance at The London Studio Centre before directing and starting the dance companies sanagi-dan in 1999 and crewimburnny in 2005.

Christina Millare: Who are crewimburnny? What do you or they represent?

crewimburnny represent a world next door to real life. It’s a world that we don’t entirely know exists. It may exist somewhere in a different dimension or time axis and is constructed out of the idea of boys’ delusional fantasies and girls’ lovely dreams. crewimburnny are girls who live in that world where fiction and reality coexist.

CM: There is definitely a dream-like quality to your performances in that they play with your audience’s sense of time and space. We don’t really know when or where your works are set. There are futuristic elements to your settings, nuuuuuuuuuu for instance looks like it takes place inside some kind of machine or on a spaceship. Yet in other instances the nuuuuuuuuuu world could be a factory, a teenage girl’s bedroom or even a nightclub! It’s interesting how you interweave worlds that are both nostalgic and futuristic. What are your thoughts on this?

NG: In terms of spatial design, I am trying to convey an image in my brain. There are definitely futuristic elements! nuuuuuuuuuu was made with the theme of time warp and space deviation in mind. The work was 300 minutes in length and comprised of one set performance repeated four times non-stop. Each repeat however, was slightly different in construction, music and narrative – similar to not being able to have the same life even if you were able to go back in time. I wanted to express how time and space may exist in parallel by way of repetition and to expose the gap between them.

In recent years, I have become interested in the distortion of and the gap between time and space and as a consequence try to create something that is a mixture of various dimensions. I try to explore how real things in our lives, for example, a teenage girl’s bedroom, a nightclub, food, rubbish and so on, might have other meanings or connections in another universe or different dimension. Although crewimburrny’s world is fictitious it might be the world that your brain produces, a place that exists in parallel to the known world. 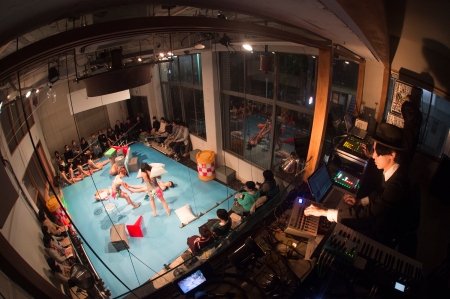 CM: The choreography of your work is very structured. Moving in unison, one dancer is indistinguishable from the other. It’s as though crewimburnny work as part of a machine or system. What kind of system are crewimburnny creating?

NG: I see crewimburnny as an entity made out of a combination of parts or by mixing individuals together. As the choreographer, I move the whole entity by moving each individual dancer. Of course, each dancer is very individual. When I choreograph my inspiration comes from the dancer so each movement has its own characteristic.

CM: I’m curious about the costumes you wear. The romper suit style and pastel colours are quite childlike. Yet the satin finish on the fabric and the nude tones make the costumes look almost like lingerie. The use of lace around the hips is also very much like a ballerina’s tutu. How do these costumes feed into the physical performance and persona of the performers?

NG: Well…first thing I can say is that I had vague image in my head many years ago before starting crewimburnny. I wanted costumes to be something we never wear in real life but something people think girls wear in their bedrooms. These costumes are what transform the performers into crewimburnny. They become inhabitants of crewimburrny’s world. The costumes are like a switch.

The important thing for me is that all of the performers wear the same costume. They are then able to become the same kind of creature. We tend to view individuality as a striking quality in a person. Our view is quite different when different people wear the same clothes, just like wearing a uniform.

CM: Could you tell me a bit about your name? It’s quite unusual, what is its significance?

NG: I actually made the name by playing with the sound of words. It was important for the group’s name to be a word which people can define themselves. The name started from the word “cream” as you probably see.  Something melty, that soaks into the brain and heart.

CM:  The titles of your work take on this same vein. Almost like a child learning how to speak! Interestingly, what struck me about your performances, is the passivity of the performers. In some instances the performers sleep, in others they are fed by audience members yet at all times wear the same neutral expression. The performers exude a kind of submissiveness. In a way they’re also infantalised. This kind of submissiveness and infantalisation of east Asian women is a construct that’s quite prevalent in Hollywood / American cinema – how has this affected the way in which Japanese women construct their own sense of identity and how does this feed into crewimburnny?

NG: This passivity is also connected to what we discussed earlier about ‘the system’, isn’t it?

I’m really interested in “girls as merchandise”. Especially in Japan, Japanese Idol (a Japanese reality television talent contest) has considerably taken root as its own culture. It interests me that the ideal girl constructed out of both men and boy’s fantasies is a merchandise. I think it’s interesting that this ideal is borne completely out of fiction and because it is constructed out of make-believe and fantasy the idols created are seen as even more beautiful.  They become idols to be worshiped.

There’s a kind of passivity attributed to these “girls as merchandise”. This passivity I think is unique to Japan where the Japanese man’s ideal woman is young, modest and submissive. I feel, however that these views are changing and women are getting stronger. We are becoming shrewder in reality. I believe that there are women out there who do want to be a “girl as merchandise” but this transformation is in itself a form of self-expression. Women understand they can define themselves by a man’s fantasy and become “merchandise” or express themselves beyond this ideal.

Although I’ve never been submissive since I was a child, I know men here have such ideals. These ideals have become as natural as eating rice.

CM: You’re very clear about saying crewimburnny explore boys’ delusional fantasies about women. Why is this distinction between a boy and man important? How do their separate understandings, fantasies and overall construct of a woman differ?

NG: Why do I say ‘boys’? Boys don’t know reality yet!  They believe that the ideal girl exists in this world.  Men probably still believe this is so but perhaps they’re reluctant to out-grow this adolescent side of their mind.

‘Boys’ are dreaming of a girl who’s from a fictitious world such as books, cinema and so on. I wanted to see such fictional girls in this real life, so I started crewimburnny.

CM: I feel your work is just as much about male identity as it is about female. Are all of these images and ideals constructed just by boys and young men? How much of this is your own perception of women?

NG: crewimburnny is constructed out of my understanding of a boy’s female ideal and the dreams of girls. I feel boys’ delusions and girls’ dreams have a different vector. Sometimes these vectors cross paths but they will usually pass each other, these ideals and dreams having differing destinations.

As I am a woman, I feel my consciousness about other women is incorporated into my being naturally and this consciousness flows  from bodies of crewimburnny.

Christina Millare is an independent curator based in London and a graduate of the Curating Contemporary Art MA at the RCA. Christina was previously based at Abandon Normal Devices Festival (AND) and Home (previously, Cornerhouse) in Manchester where she produced ‘New Cartographies: Algeria – France – UK’ (featuring Kader Attia and Zineb Sedira) and developed projects as part of AND Festival’s live programme. She has since worked on independent curatorial projects for MK Gallery and is currently curating a forthcoming film, performance, exhibition and education programme for Regent St Cinema, Hackney Showroom and The University of Westminster in London and Grand Union in Birmingham.