The art fair is a strangely modern phenomenon and it is stranger still when one sees a Joseph Beuys felt suit on sale in one of the heavily crammed booths at Art Basel Hong Kong. I can only imagine Beuys himself would be deeply opposed to this late-Capitalist tradition of the ultra-commodification of art. Even seemingly worthy artists such as Christo & Jean-Claude, whose drawings set a precedent for ambitious installation artists, tactically sell sketches of larger works to fund other projects. It seems inescapable then that to succeed as an artist, one has to jump through the hoops of the market. But is there no disembarking this cynical gravy train? A few artists stand out from the pack of bourgeoisie apartment fillers.

Keiichi Tanaami (Gallery Nanzuka) harks back to equally turbulent times but with playful and hopeful tendencies. Tanaami expresses the speed of globalisation of post-war Japan in his Gilliam-esque animations. Colourful pop art style creations like Oh Yoko! (1973) and Commercial War (1971) that blend together the complexities of sexuality, celebrity and the tumultuous politics of the time.

Joyce Ho’s IF and Pull Me Up Softly (TKG+) display Ho’s characteristic comicality and whimsy with kinetic and multimedia installations. The works show an absurdity to rituals of daily life and seemingly mundane objects which are reminiscent of Koki Tanaka’s farcical performances. Pull Me Up Softly had one or two viewers at the fair jumping out of their skin as the kinetic installation slowly transported a pair of red wellies 3 metres into the air, only to send them hurtling down to thud onto the table top.

Eko Nugroho’s The Dance Corps series (Arario Gallery), sees a series of figures crowded together to form a protest mob. On closer inspection the mob is dressed in a fascinating Pop Art fabric assemblage of toy masks, traditional fabrics and headdresses, ironic t-shirts and protest signs with slogans such as “OH COME ON! NOT AGAIN!” and “SHIT !! WRONG PARTY AGAIN !!” It is a careful blend of first and third world problems, of the strangeness and awkwardness of all social boundaries faced in contemporary society.

The real stand out must have been Shen Shaomin’s Summit (Osage) which is a wry and poignant piece that feels timely and exemplifies the difference between our 21st Century world and those who made the news in the 20th Century. The piece sees the significant leaders of the Communist world ‘lying in state’. Lenin, Mao Zedong, Kim Il Sung, Ho Chi Minh and lastly Fidel Castro. Castro, who feels like he’s been freshly ‘wheeled in’, marks the final nail in the coffin of the 20th Century’s attempts to find alternatives to the Capitalist machine. The final irony of course, it is a capitalist circus their corpses find themselves in the centre of. 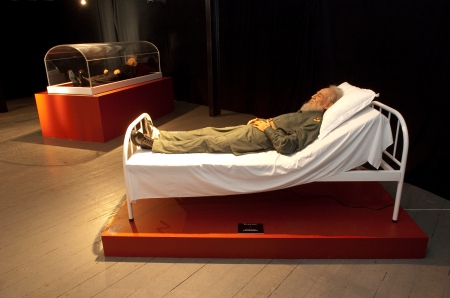 Tom Milnes is an artist, curator and Ph.D researcher living and working in Oxford. His work and interests explore our relationship with technological cultures. Milnes’ use of site-specific work exemplifies different cultures responses to technology with works actively confusing time frames. Milnes has exhibited internationally including: Gyeonggi International CeraMIX Biennale – Korea, AND/OR – London, The Centre for Contemporary Art Laznia – Gdansk, and W139 – Amsterdam. This year, Milnes was awarded the 3D3 scholarship for research at Falmouth University. Milnes was recently the Sandarbh International Artist-in-Residence and Kingsgate Emerging Artist-in-Residence. He is the curator and founder of the online platform Digital Artist Residency.