The current world-picture changed massively since the post–World War II aftermath led to the reconstruction of the idea of Europe; since decolonisation opened up Africa and Asia; since the era of revolution versus dictatorship in South America led to neoliberalism and then to populist socialism. Furthermore, as observed by Okwui Enwezor, the monolithic certainties of modern culture have been abandoned in favour of off-centered systems of multiple contextualised values, that <<allows the emergence of multiplicity, the breakdown of cultural or locational hierarchies, the absence of a singular locus>>1.

Postmodern is indeed defined as the end of the grand-narratives2, as to say large-scale theories and philosophies of the world such as the progress of history and the knowability of everything by science, with a consequent loss of our sense or reality.

However, according to some theoreticians3, this disorientation leads to the potential for heightening cultural difference and inclusivity, for intensifying the critical thinking about multiculturalism, and for amplifying the importance of postcolonial studies to redefine the interactions between European and non-European cultures.

In art, as stated by Joseph Kosuth, the end of modernism means the end of the age of science, of the domination of technology and bureaucracies to which belong art movements as pop art, photo-realism and the return to painting of the ’80s that he describes as a form of distance. Specifically, Kosuth elaborates the idea that the artist <<is a model of the anthropologist engaged>>4 participating actively in his context. Going further, Kosuth argues also that the actual problem of modern criticism was/is a matter of the methodology applied to the critical work, too often carried out with coldness, objectiveness, almost apathy, rather than as his model of anthropologist engaged.

One of the most interesting attempts to join art critique, curatorial practice and the so called ethnographic turn is the aforementioned Nigerian curator Okwui Enwezor, who often focuses on how contemporary art could develop in a dialectical relationship with an increasingly global culture, and how curating can treat the themes of proximity as a matter situated at the juncture between hostility and hospitality and other dichotomies like the near and the far, the savage and the civilized, as to say all that set of elements that define the relationship of power between the explorer and the explored and that constitute the critical point of postcolonial studies5.

Following, three exhibitions are going to be analysed as case studies of current curatorial models concerning identities, otherness and a quasi-ethnographic approach:

They were on view in London in the very same period (from October 2015 to January 2016), but in three different districts and kinds of space, consenting to make inferences about the relationship between the nature of each location and the respective curatorial strategy actuated in the show. Indeed, the three projects were fairly different in terms of conceptual attitude, engagement with the audience, and mode of display.

Smile Orange is a group show at Cubitt, an artists run space in Islington. The exhibition is curated by the independent curator Morgan Quaintance and explores dynamics of identity formation, history and memory from three different perspectives: personal identity, community identity, and national identity.

Curator Morgan Quaintance has joined together three UK artists with a very different practice (Russell Newell, Karl Ohiri, Ben Sanderson) to create a complex exhibition path in which two non-artworks elements has been inserted by the curator himself to contextualise the project and give the audience some background information: (1) a map of the active British Colonies in 1886, and (2) a wall-paper chart illustrating the top ten countries of birth for UK residents not born in Britain between 1951 and 2011.

The audience is guided through the exhibition with data and insights and has a total experience composed by the texts, the artworks, a specially-designed wallpaper and a soundtrack coming from one of the videos.

La escuela del Sur is a major commission by Venezuelan-born artist Sol Calero at Studio Voltaire, in Brixton. Calero worked on a large-scale installation that reconstructed the architecture of a Venezuelan village situated in the Caribbean Sea which bears the legacies of colonialism, as demonstrated by the picturesque houses, a combination of European, indigenous South American and Afro-Caribbean influences. She uses this hybrid architecture to recreate a vision of paradise but also to problematize the carnivalising identity of the other.

In this case, it is arguable that the curator’s intervention in the construction of the exhibition is modest, a part from the choice of the artist. In effect, curator Jessica Vaughan is also the project manager of the space, so her presence in the exhibition is mostly intended not to represent her own view but Studio Voltaire’s institutional vision.

Studio Voltaire is regularly supported by the Arts Council England and promotes the production of artworks that may not be possible in commercial frameworks, besides developing a programme of participation and research based within the local community. According to these guidelines the curator’s mediation between the artist and the space results in an unique site-specific production which show a particular attention for the audience. The public is, in fact, totally immersed in the reproduction of the sensory engaging village.

Eventually, Norma is a solo show by US artist Kara Walker, who works especially on identity and gender issues for African American women. She engages with historical narratives of colonialism and slavery and the ways in which these stories have been suppressed, distorted, and falsified.

For her exhibition at Victoria Miro Mayfair, Walker showed a selection of preparatory drawings and sketches in pastel and watercolour related to a special project in Venice commissioned by Okwui Enwezor to coincide with the latest Biennale. Thus the exhibition is not an autonomous project, but makes sense only when linked to the Venetian event.

It can been said that, being Victoria Miro a powerful private gallery, the function of the exhibition is to present the commercial part of a more complex project and has not an authorial view in itself. Indeed, there is not a curator of the exhibition and, above all, the link between the display in London and the project in Venice had not been neither properly documented nor clearly explicated, denying the audience a complete understanding.

All in all, La escuela del Sur at Studio Voltaire is presumptively the most carefully developed project among the three. Indeed, the solo project by Sol Calero puts the audience in proximity of the postcolonial issues deconstructing the commonplaces about postcolonial territories by depicting their stereotypical imaginary. The project offers both an idea and a sensorial experience to its audience and at the same time represents consistently the artist’s practice, in contrast with Smile Orange where the curatorial idea is imposed over the works to create a composite tableau.

At the same time, even if the work of the curator of Studio Voltaire, Jessica Vaughan, has been limited to her mediation, it is not a pure bureaucratic task as in the case of the display at Victoria Miro. Actually, the mediation of Vaughan concerns situating the sense of proximity of the audience, creating a zone of contact between the near and the far, questioning the ethics and the responsibilities behind each decision, communicating the sense of otherness without succumbing to forms of soft-power of the new cultural colonialism.

As a matter of fact, it must be taken into consideration that a large part of the ethics discourse in curatorial practice concerns these kinds of soft-power6, especially when in the ambit of the postcolonial studies curators can risk to stress the differences between the explorer and explored rather than combat the residual effects of colonialism.

The art practices – both in the role of the curator and the artist – should then take the responsibility to deal with global issues on cultural identities placing themselves in proximity to their living context, as advocated by Kosuth, besides absorbing and mediating the tensions among communities.

As a final statement, the above analysis can be resumed saying that it is part of the curatorial tasks to build a constructive discourse among cultures, to constantly question and reconsider duties and the responsibilities of the institution that the curator represents, to make ethical choices, to allow the audience of experiencing the otherness out of the common frames of dichotomies like the near and the far. 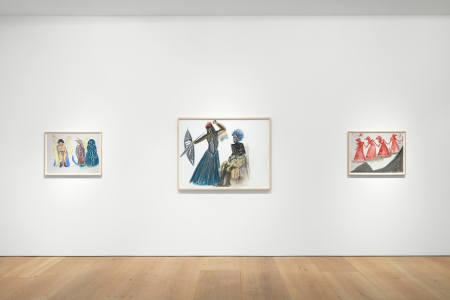 Carolina Lio (b. 1984) holds a degree in Semiotics from the University of Bologna, course directed by Umberto Eco, and is now student fellow in the Curating Contemporary Art Programme of the Royal College of Art, London.

She curated exhibitions at Fondazione Bevilacqua La Masa in Venice; Hong Kong Arts Centre; Oslo Fotokunstskole; Italian Institute of Culture in Los Angeles and Barcelona, among others. Her curatorial projects have received grants and supports from institutions like European Cultural Foundation of Amsterdam, and Soros Foundation in New York.

In 2015 she was curator in residence at MACBA, Museum of Contemporary Art, Barcelona.

Enwezor, O., (2012) Intense Proximity: an Anthology of the near and the Far. Centre national des arts plastiques Tour Atlantique, Paris.