Contrary to what many people believe, enjoying the Venice Biennale in only one day is possible. You have to give up the several pavilions spread around the city and the collateral events, but still there is enough time to visit the two main sessions of the fair, Arsenale and Giardini.

The Arsenale, the largest pre-industrial production centre of the world, is where I started my journey, my narrative walk. Suggestively left – as usual – with stripped walls and uneven floors, it needs at least three hours to be visited, walking constantly without breaks. I suggest to do it as your first activity in the morning, when it opens at 10 – Giardini (that literally means “gardens”) are quite big and it is easy to get lost and lose the sense of time among the national pavilions.

The curator of this year, Nigerian Okwui Enwezor, previously the first non-European artistic director of dOCUMENTA (the 11th), now the first African curator of the Biennale, is quite unconventional, if you allow me to use the term. He does not shy away from political issues, including globalisation, is understandably comfortable looking beyond American and European traditions into African arts and has a curatorial history that involves very much African contemporary art. This year the show contains well-known artists such as Bruce Nauman, Isa Genzken and Hans Haacke, yet it also includes many Middle Eastern, African and Asian names little known in the West.

The Biennale as an international art fair has the intrinsic aim to gather artistic experiences from all over the world, but particularly this year it highlights what feelings combine all the countries and populations nowadays; “All the worlds futures” mirrors fears, expectations, hopes and connections with the countries’ intimate past.

Entering the Arsenale, you are welcomed by bushes of swords – ironically called Nymphéas – by the Algerian Adel Abdessemed surrounded by Bruce Nauman’s neon contrasting the words “love”, “life” and “pleasure” with “hate”, “death” and “pain”, as if they were stating the inevitable.

The space is filled with objects that recall a future that we probably do not want to see. Monica Bonvicini hung big sculptures made of black chainsaw and axes, Abu Bakarr Mansaray exhibits big drawings from 2003 of bizarre imaginary machines of devastation or weapons of mass destruction that the hyper-technological West is building to fight the South of the world; Terry Adkins created a super-high totem of drums that are defined muffled, reference to limits of expression, and Katharina Grosse installed drapes and spray-painted concrete in a kind of post-apocalyptic landscape.

The condition of slight anguish is pacified with the project of the Columbian artist Oscar Murillo who asked 5000 children between 10 and 16 years old, from 20 countries, to cover their school desks with a piece of canvas and occasionally scribble on it; individuals in charge show the visitors the cultural differences highlighted by the pieces as well as the associations.

The long path that runs beside the medieval Corderie (the southern side of the Arsenale) has been lined on either sides with sewn together cocoa sacks by Ibrahim Mahama, an artist from Congo, reminding us of Burri and at the same time suggesting the evocation of an eroded world.

When I moved to the Giardini, the first pavilion I visited was the Central one, whose organisation is again in charge of the chief curator. The entrance hall is full of Fabio Mauri’s artworks; drawings, paintings and embroideries that repeat obsessively “The End”. You can read the same words on the top of a long ladder that leads to nowhere and in the middle of the room there is a huge pile of suitcases called Western Wailing Wall, making us reflect upon war immigration (very current although it was exhibited for the first time at the Biennale of 1993). In the small following room there is an endless video of the French Christian Boltanski, Coughing Man (1969) whose sound invades all the rooms around, and, some rooms after, the South African Marlene Dumas is presented in twenty little paintings of blurry skulls. Everything seems to stand for a totally unpleasant future that leads to nothing.

Going further you find a room with pieces by Adrian Piper – that won the Golden Lion for best artist at the Biennale – a number of school blackboards on which are written the lines “Everything will be taken away”, like a punishment suffered by the naughty kids of humanity. No hope at the horizon.

The national pavilions I saw in the Giardini have been responsibilities of the different countries, that acted quite independently, yet keeping in mind the main theme given by Enzewor. It took me the whole afternoon to go through the park, map grasped in my hands, to be sure not to miss anything. It was hard to find most of the pavilions truly interesting. Visually catching, the Japanese has become a sort of mysterious pantheon where miles and miles of red string have been hung and intertwined between two boats and filled with keys collected all around the world. The external walls of the Israeli pavilion have been covered with tires and the building contains a number of objects with apparent no order and a placard saying “Wonderland”, in an intricate ideal net titled Archeology of Present.

The French have produced three trees that “walk” slowly indoors or outside close to their real brothers, the Germans have created a video game motion-capture studio, Sarah Lucas has transformed the whole British pavilion in a banana-yellow temple of profanity.

Interestingly enough, I noticed that some pavilions have looked to the future referring to their past, between the fear of losing their history and the need to justify their present identity with it. Mozambique shows both contemporary and traditional artworks, some of which are so old that we cannot know the author nor the title; Albany ponders on its social history with an exhibition overflowing with objects between evocation and documentation; the United Arab Emirates looks at the history of art exhibitions in the country over the last forty years without following a didactic chronology; Fiona Hall in the brand new building of the Australian pavilion placed tribal-looking sculptures.

Great space is given this year to sound art, such as in the Nordic pavilion where Camille Norment realised a multi-sensory space, which reflects upon the history of sound and contemporary concepts of consonance and dissonance, or the Latin-American pavilion that contains several speakers playing the voice of indigenous, performing some of the 600 dialect of South America, some of which threatened with extinction; the Arsenale also contains several sound installations, such as Kay Hassan’s Empire Medley, in which a piano plays alone an anthem of an imaginary reign.

The Four Horsemen of the Apocalypse are surely coming, according to Enzewor. In the 56th Biennale we find evil characters, contemporary wars, starvation of communication, interpretations of death, in a fascinating grandeur that involves all your senses and surprisingly donate us a pleasant adventurous walk – as long as we are not in the future yet. 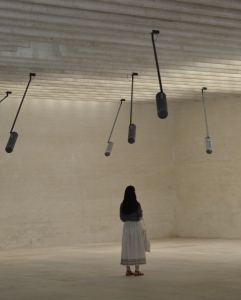 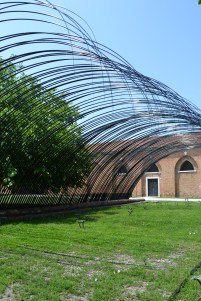 Silvia Meloni (1988, Bergamo, Italy) is a young curator based in London. She graduated in 2011 in Art History at Università deli Studi di Milano (Italy), in 2013 she completed an MA degree in Art History in Pavia (Italy) with specialisation in Contemporary Art and in 2015 an MA in Curating at the Cass Faculty of Art and Whitechapel Gallery. She is currently employed at Sprüth Magers and collaborating with The Agency Gallery, while working on independent projects. Her works pay attention to the relation between contemporary art and history.