“Fashion pictures show people looking glamorous. Travel pictures show a place looking at its best, nothing to do with the reality. In the cookery pages, the food always looks amazing, right? Most of the pictures we consume are propaganda.” [1]

In the last decade there has been an increasing interest in photobooks, motivated by both their cultural and artistic value. In them, photographs are not isolated acts, serving as a narrative with a particular insight into history. The re-discovering of these objects seems to focus predominantly in Eastern civilisations, as there appears to be a big void in the Western understanding of their past.

Curated by Martin Parr and the artistic collective WassinkLundgren, The Chinese Photobook brings together, not only a complex portrayal of China’s history but also, a comprehensive view on the value of photographic publications. It studies how these objects have the ability to reveal, conceal and even rework realities.

Despite being chronologically ordered and divided in historical sections, the exhibition allows for them to be seen individually, with no linear path to be taken. Parr’s stamp can be seen, in all its strength, at the far right corner of the room: Chairman Mao’s pictures fill in the wall, easily capturing the attention of the Western eye.

Around 1949, public publishing was banned and monopolised by the communist state, for the sake of the Cultural Revolution. It followed the guidelines of a Mao cult-based society. The three different pages from the book Chairman Mao is the Red Sun in Our Hearts, from three of its exemplars, mirror these ideas from a particular point of view. It comprehends pictures of Mao Tse-Tung, accompanied by Lin Biao, Vice Premier of the People’s Republic of China, who ended up dying in 1971 after allegedly conspiring against the leader.[2]

The pictures show us how people took upon themselves to somehow erase – now banned – Lin’s images from history. The propaganda is subverted, in order to “keep up” with the political changes, however it’s done individually, at home.

This propaganda-devoted culture, shown here at its prime, goes back to the 1920’s, well represented if you walk back through the exhibition’s timeline. The sections From the Empire to the People’s Republic of China (1900-1949) and Manchuria and Sino-Japanese War (1931-1947) lay out the evolution of Chinese photography towards the propagandistic tool it later became.

There is an interesting emphasis in how the invasion of Manchukuo (or Manchuria) in 1931 by the Japanese is depicted in two different perspectives. The Japanese books focus mainly on the legitimisation of this invasion to their people, through a sophisticated photographic production and publishing. It shows a thriving Manchukuo, under Japanese power. On the other hand, the less resourceful China published more humble books showing the accomplishments of their country’s resistance.

Nonetheless, both books have a clear common point: they aim to educate and motivate the population though an exact and well-thought perspective, without ever neglecting the form in favour of the content. Some of them were even translated to English, having also another audience in mind.

It is not all about how the East sees itself. The Western perspective comes in regularly throughout the chronology, before and after the Cultural Revolution period, culminating in its own solo section.[3] From Henri Cartier-Bresson’s positive diaristic depiction of the beginning of Mao’s era, to Thomas Sauvin’s grouped archives of discarded negatives; the Western eye is more bland, less aggressive and des-informed. It reveals a completely different perspective, still telling stories though history – even if constructed.

It’s too simple to say that it is wholly critical; rather, in this era, when we are so aware that photography is a slippery medium, many photographers enjoy the game of teasing the viewers as to whether what they depict is loved or hatred, or both at the same time.[4]

This exhibition shows photobooks as small, illustrated, particular points of view, independently of who the writer is or what he wrote about. They are little history tellers, luring the reader to believe that what they tell is the reality, the facts. Is it, then, fair to say that all history-related photobooks are propagandist? Is propaganda so dissimulate and disseminated that we can’t even recognize it or separate ourselves from it anymore?

The Chinese Photobook runs at The Photographers’ Gallery until July 5, 2015. 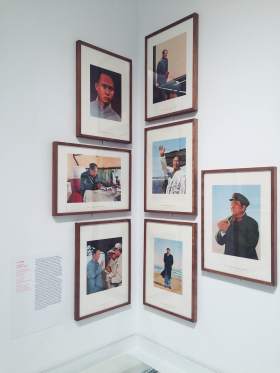 Inês Costa (Almada, Portugal) is a curator and photographer based in London. In 2012 she graduated with a BA in Multimedia Arts – Photography from the Faculty of Fine Arts of the University of Lisbon. She has done freelance photography work for names such as Fact Magazine PT, Ponto Alternativo, Big Issue Foundation and Tangram Theatre Company. Currently, she works as a Gallery Assistant at GX Gallery in London, alongside being part of the MA Curating the Contemporary at the London Metropolitan University and Whitechapel Gallery. Through her course, she co-curated PROTECHT in March 2015.

All images courtesy of Inês Costa and the Photographers’ Gallery