or: When will we learn to stop worrying and love enjoyment?

This something is enjoyment.

Enjoyment goes unspoken. Enjoyment’s become a dirty word. It’s a hard word, an easy word, a happy word, a sad word, a joyful word, a pleasurable, hateful, tearful, serious, comic word. And all of those words, that sum up this word ‘enjoyment’, well, they just happen to be different modalities for the very selfsame thing. So then, why does it seem like such a bad thing? Why did it turn out to be, in my last experience of ‘blurting’ the word, such a strange and contested thing? (1)

It got me thinking; do I get looked at with suspicion when my enjoyment shows itself on my face? Or should I try to remain poker-faced as I work, making sure no one can guess the hand I’m going to play next. Or is it more that, in order to admit to enjoyment you have to admit to a deeper, darker side of yourself somehow? And this is why a certain level of asceticism seems to be enveloping our contemporary scene right now? To admit to enjoyment is to admit to yourself?

Or is it something else? Are we living in a time of dreary asceticism that prohibits and even sometimes punishes the very idea of enjoyment? That to admit to enjoyment in the face of the ascetes is to split from the ‘intersubjective network’? (2)

To complicate things even further (probably mostly for myself) is to suggest that the suspicion metered out on ‘Leftist’ societies has lingered in the post-Soviet ‘Marxist’ leanings of contemporary art institutions. Lefebvre once resurrected Ranciere in his piece Towards an Architecture of Enjoyment by saying that:

‘The suspicion of sensual enjoyment and consumption was deeply entrenched in left political discourse ever since the early nineteenth century, tracing any hint of betrayal of the proletariat changing sides toward the petit-bourgeoisie and condemning the “individualism” of those who disturb collective solidarity and do not comply with the norms and larger aims set by the organization.‘ (3)

But here we find ourselves at a sticking point. Even if we avoid the obvious of the notion of sensual enjoyment and consumption being so intertwined (something we will get back to later(4)), we find ourselves confronted with ‘sensual enjoyment’. Now, sensual enjoyment can quite easily, and rightly, be interchanged with the word ‘pleasure’. But what I want to talk about isn’t, necessarily, based in the realm of the sensual. Though clearly this is involved, but it isn’t the be-all-and-end-all of enjoyment. Enjoyment is a many-headed hydra, a multifarious, facetted gem of a thing. Facets that are small, big, dark, light, absorbent, reflective. We must not confine ourselves to those facets that give sensual pleasure, the pretty ones, the deep ones. To confine enjoyment to pleasure in such a way is akin to a purge, a dangerous denial of existence. A denial to be all it can be.   Enjoyment cannot, and will not be cajoled into the purely ‘pleasant’:

‘It is essential to any theory which conceives of the function of art in affective terms, if it is to have any plausibility as a general theory of art, not to limit its (enjoyment’s) value to merely sensuous.’ (5)

Thus spake Henry Aiken. ‘Enjoyment includes whole ranges of meaning, reference, and expression’ that go far beyond sensuous.(6) And for sure, contemporary art scenes, and institutions know all about going beyond the ‘purely sensuous’. But maybe it’s gone so far beyond (apparently left) that it’s begun to reach the apex of the horseshoe and is traversing the gap, heading back to the right. Extremely…

But let’s get back to these suspicions. Cast your mind back to the start of this article. What did you think when you figured out all this was about enjoyment? And what if I told you that you enjoy what you do? In excessively basic terms; we all enjoy what we do, otherwise we wouldn’t do it. Now, before you stop reading and start protesting just remember the modalities. OK? Refuse to believe it as much as you will, stop reading, slam your laptop shut, walk out the door, slam that shut too. There, that was nice and cathartic, right?

Enjoyment, its affects and effects, comes and goes, from and to some space where not even our strictest asceticism can gain a foothold. Spank you very much, Foucault. Embrace it. This ‘space’ of enjoyment cannot be quantified, condensed nor commodified. Pleasure can be packaged, localized, pimped, sold. But then the enjoyment dissipates and there’s not much left anymore. ‘Enjoyment cannot provide a ready-made, consumable form of enjoyment.’.(7) That’s precisely why there’s really no need to be so suspicious. Relax, sit back, enjoy.

Is there any space left for enjoyment in the contemporary? Where does, or can enjoyment be placed, or found?

As a space of leisure the gallery operates at an interesting juncture, whereby the audience is invited in. With apparently smiling faces and a warm welcome the visitor comes to enjoy. To enter ‘a sphere beyond work’.(8) But as is pointed out in the introduction to Lefebvre’s ‘Towards an Architecture of Enjoyment’, there is reward, and danger. Spaces of leisure are ‘sites that condense the most extraordinary promises of modernity with the dangers of ultimate alienation’.(9) The alienation is what we all want to avoid, right? We want our audiences to come, to enjoy (please, I implore you, remember the modalities). If the audience doesn’t enjoy, then we haven’t done our job. And doing our job only comes when there is a realization, and admittance (even if privately in the mirror or to a tree in the forest) to ourselves of our own enjoyment. Must we keep a mental space for enjoyment? It is always there anyway, but we should surely try to keep it open? The problem is how we react to the very notion of enjoyment, what we really understand this to mean. Already I have hoped to show you that enjoyment doesn’t just mean happy, shiny people. The difficulty in the mental space is illustrated quite nicely again by Lefebvre:

‘Mental space, the space of thought and language, of reflection and representation is bound by social space.’ (10)

The social aspect of enjoyment, especially of the art institution, is something kept on the peripheries. In the free glass of wine at the vernissage, or the after party or the Facebook discussions of those private thoughts at the last ‘terrible show’ you saw. Somehow the enjoyment aspect of viewing art is kept in these peripheries. On the outside, peeping in, adding to the atmosphere but with nobody acknowledging its importance. The enjoyment seems to transgress the artwork. To be enjoying something too much. This is possible. It seems mad, awful even, but it is possible. That’s probably due to the bindings of the ‘social space’.(11) We don’t want to, nor feel we should not, impose our enjoyment. But that’s because enjoyment itself takes work. We don’t experience enjoyment ‘just like that’. Enjoyment is something we have to commit to, to dedicate to. To conduct ‘to the best of our abilities’.(12) But then to admit to that enjoyment means admitting it to others and, maybe more crucially, to ourselves.

In Zizek’s ‘For They Know Not What They Do’, we find that;

‘… enjoyment in itself, which we experience as “transgression”, is in its innermost status something imposed, ordered – when we enjoy, we never do it “spontaneously”, we always follow a certain injunction.’(13)

While curators curate artists, and artists create the work curators curate, and whilst curators create copy for the creations of the artists they have contrived to curate, the space of enjoyment gets annexed by the ‘curator’s statement [which] is a general statement of philosophical concerns’;(14) the ascetic poker-face.

The status of the enjoyment injunction needs reassessment. The statutory positioning of enjoyment in the art institution is something that, for the sakes of honesty, needs to be reestablished, reassigned, and re- (or even better, un-) codified. Let’s move on. Get up from sitting back, don’t relax too much, and then…? Enjoy. 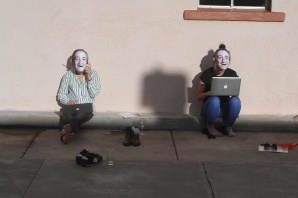 Charlie Dance is a visual artist and writer, from the UK, but currently based in Warsaw, Poland.  He completed his degree in 2010 at Glasgow School of Art and will complete his Master of Fine Arts from the Dutch Art Institute in the Netherlands, July 2015.

He scrutinizes the placement, reception and complexities of the trivial.  To decipher its cultural importance, its guises, and to approach the ‘out-of-focus’ as a mode of speculation. And all whilst trying to enjoy it.

He is currently working on a project with the deceased Peter Sellers.

7) Lefebvre, Toward an Architecture of Enjoyment, p 86

8) Stanek, Lukasz, Toward an Architecture of Enjoyment, p XXXI

10) Lefebvre, Toward an Architecture of Enjoyment, p 117

Derrida, Jacques, The Animal That Therefore I am (More to Follow)”, Critical Inquiry Vol. 28, (The University of Chicago Press, 2002)

Wilson, Scott, The Order of Joy, Beyond the Cultural Politics of Enjoyment (State University of New York Press, Albany, 2008)

Zizek, Slavoj, For They Know Not What They Do, Enjoyment as a Political Factor (Verso Books, London, 2008)

One thought on “The Shrinking Space”