At first I failed to register the final exhibition of Sonora 128’s two year billboard tenancy. My wife and I were driving south east, turning onto Av. Álvaro Obregón at Parque España, on our way home from Chapultepec. From the compromised perspective of our car, I saw what appeared to be the cast shadow of a bird in flight projected onto an empty advertising space. Retrospectively, I now know that the shadow was a silhouette, the photographic image of a solitary bird of prey that is the final work in the oeuvre of Felix Gonzales-Torres, before his early death in 1996. 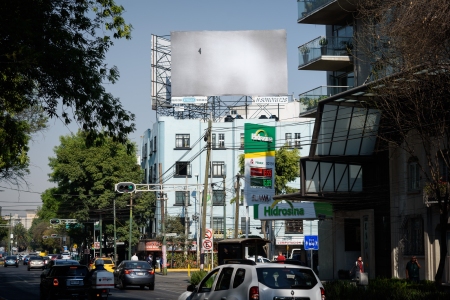 With the end in sight, Sonora 128, a public exhibition program by kurimanzutto, has taken a decision that embraces the contradictory conditions of visibility, a six-fold increase in locations, and invisibility, the quietness of Gonzales-Torres’ pictorial choice. In the dense cacophony of city life, untitled (1995) can be impossible to spot, above a shop on Gobernador Agustín Vicente Eguia it is concealed amongst trees, on Viaducto Tlalpan it competes with whisky and sneaker advertisements. In all six locations the black and white expanse of sky reads initially as a stretched fabric surface saturated with the city’s famous pollution. The bird, at a glance, seems real.

In a beautiful gesture, the moment of maximum visibility is the hardest to recognise, yet in a manner consistent with Gonzales-Torres’ practice it is loaded with pathos, opportunity and optimism. Previous installations by Sonora 128 have directly confronted myriad publics with political propositions, sexual provocation, or simply the refreshing intensity of brilliant colours, not always entirely ambiguous declarations of intent. Here, in the final instance, the project seems to hand over all possible interpretations to the city, a farewell gift of sorts. 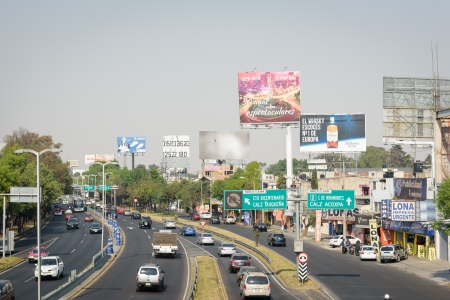 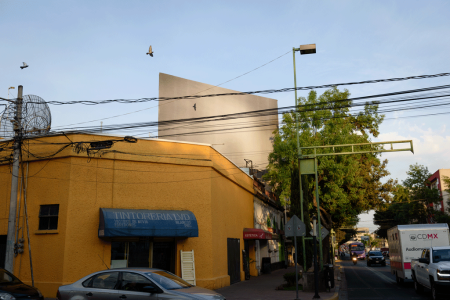 Without colour, untitled rejects reality and creates, as all black and white images inevitably do, an area of possibility and romanticism which the viewer is able to project onto and is invited to fill. The bird, archetypal symbol of freedom, takes on personal, societal and political possibilities; the expanse of sky which it is isolated upon, options, potentials, and the correlating fear that comes with being required to make a decision.

Reading from the life of Gonzales-Torres, born in Cuba, raised in Puerto Rico, an emigre to the United States, it could speak of an economic migratory potential. A potential more important now than ever and needing staunch defence. Or, in regards to his sexuality, the constant societal movement forward for young men and women to embrace who they are and to express it with confidence, against a history of imposed shame, fear and silence.

For me, and maybe others who have become attached to the regularity of this public art project, the bird in flight is an appropriate lamentation: Sonora 128 as the bird, which you can trace through the air, but will inevitably lose sight of, moving beyond view into the clouds or off the horizon. 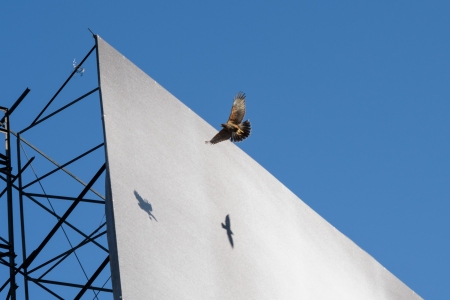 However, I have a sneaking suspicion that a larger percentage of the city will see the bird as an image of a bird, recognise its genus and romantically recall a time when the city was more populated with wildlife, or a time when they lived beyond it’s extensive boundary, a life more attuned to nature.

Yet, all of that said, it is impossible to pin a meaning to the art of Felix Gonzales-Torres; despite working on a medium of grand commercial messaging, his billboards never speak with a deliberate message. They’re a form of epic theatre, in each instance shown in either 6, 12 or 24 sites, which calls, in a Brechtian fashion, for the inert citizen actor to reflect upon their circumstance and through consideration and contemplation become motivated towards social action.

How the display of untitled across Mexico City will manifest itself is impossible to predict, and in all likelihood the result will be all but invisible to discern. Tens, maybe hundreds of thousands, will take a little bit of Gonzales-Torres with them, a drop of him entering the bloodstream. We will never know the end points. 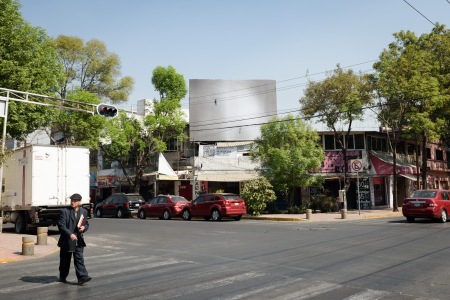 On a geo-social level the choice of locations calls attention to unrecognised parts of the city. Timed to coincide with the Zona MACO Art Fair it is possible that patrons will pay homage to Gonzales-Torres by visiting all six billboards, and thereby take in neighbourhoods outside of the art centres of Roma, Condesa, San Miguel Chapultepec and Reforma. A further, deeper, interpretation of the paradoxical invisible visible ethos. 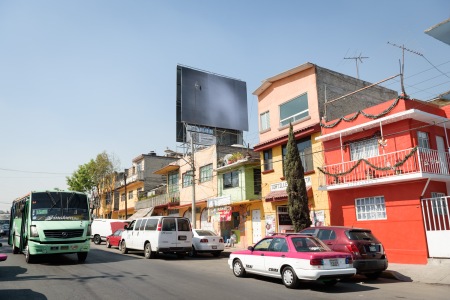 I can confess that I am sad to see Sonora 128 come to a close. Fortunately, I have been living in Mexico City for long enough that the billboard project has become part of my life, an outdoors opportunity to take in artistic nourishment without making deliberate expeditions to a gallery. But, it is an appropriate ending. With Gonzales-Torres’ untitled, the ethos of Sonora 128 is dissolved into new locations, transmitted to new audiences, not only announcing the city as an important location of artistic creativity, but also of possibilities in a broader, more indefinable sense.

Elliott Burns is an independent curator and writer living between London and Mexico City. Having graduated from Central Saint Martins’ MA Culture, Criticism and Curation program he has worked as a curator for UAL on a series of exhibitions, as production assistant on Art Night 2016, and co-founded Off Site Project, an online exhibition space.