In times like these – with raging wars causing mass migrations, the riise of nationalism, populism, Donald J. Trump as US president and with the uncertainty that ‘Brexit’ has spread in Europe and beyond – can art really keep clear from political events and social concerns? This year’s Venice Biennale suggests a no. National participations clearly address extremisms, humanitarian crisis and the ever-growing gap between wealthy individuals and those under the poverty threshold, partially failing to conform to Christine Macel’s intention to put artists and art at the centre.

Moral issues, cultural stereotypes, class, discrimination, politics, religion, gender, sexuality and, above all, identity are the research and experimentation groundings of Grayson Perry (b. 1960, Chelmsford). Best known for his innovative reinterpretation of traditional means like pottery and embroidery, and for his transvestite alter ego Claire, Perry is a multi-disciplinary artist whose practice encompasses a much larger variety of media, including photography. In the 1980s he was part of the Neo Naturists, a London’s subculture of ‘hippies’ and squatters who intended to revive the spirit of 1960s live art, and appeared in many of their performances. He also did a project in architecture, designing his dream house (A house for Essex, 2015) which he started “doodling wildly and quite drunkenly in front of the TV”1.

At first, his works appear to be nothing but colourful decorative objects that could fall into the derogatory category of things that are ‘pretty to look at’, but at a better look they reveal a poignant – and often dark – subject matter: the naked truth.

Being born in a province of Essex and growing up as a transvestite teenager, Perry didn’t have an easy time. That’s why the sense of otherness, of belonging to a minority, permeates his work and the gaze, lifestyle and behaviour of the ‘alpha males’, whose sensibility is opposite to his, is ever present in Perry’s critical observation of British society. He coined the term Default Men to define “white, middle-class, heterosexual men, usually middle-aged”1who benefit the most from society’s rules and impose their will and taste on others. It is this excessive, damaging masculinity that he speaks against in the documentary ‘All Man’, aired on Channel 4 in 2016, where Perry investigated the male-led world of finance. Artist Fiona Banner, when asked by PEER gallery to produce work in response to the Archive of Modern Conflict [3], worked with Magnum photographer Paolo Pellegrin to capture customs of the city workers in a bitter parody of the rotten society and corrupted humanity described in Jasper Conrad’s novel Heart of Darkness (1899). Similarly, Perry explored the marble lobbies of London’s billion-pound skyscrapers and interviewed some of the top financial players to gather material for two new artworks that could express the persona he had come to know along the way. ‘Animal Spirit’ (2016) is one of the results: a large-scale woodcut print depicting a wild beast, half bull half bear, that roams a desolate land and has all the attributes Perry saw in the bankers, including, of course, prominent genitalia. The horizon is covered in well drills and a baby lies abandoned in foreground, ready to be fed by the beast or, perhaps, left to the crows that stand on its back. The second piece that resulted from his survey of masculinity is even more direct – a 68cm glazed ceramic phallus decorated with images of bank notes, city workers, and the face of the politician George Osborne, the UK’s former Chancellor of the Exchequer. The sculpture is fittingly titled Object in foreground (2016) to remind us of the one thing needed to succeed in this environment.

Perry returned to the depiction of a collective identity in Matching Pair (2017), a couple of vases representing two ‘opposite’ groups of people: leave and remain Brexit voters. To realise the vases, currently on show at the Serpentine Gallery, Perry crowd-sourced information. He asked the British public on both sides to submit a picture that represented them, choose a colour for their faction’s pot, choose a favourite brand, a favourite symbol and finally asked what they like most about their country. Then he decorated one vase with the leavers’ preferences and the other with remainers’, but the final two products are hardly distinguishable, as both sides have a lot more in common than they could have believed possible. It is a perhaps unintentional demonstration that, despite the sudden conceptual conflict brought about by Brexit, we are still part of the same community. 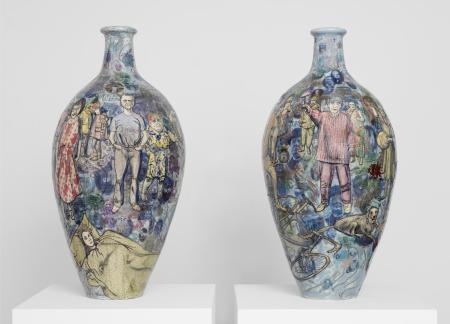 Showing the common denominator, the detail that everyone can relate to or recognise as familiar, constitutes is a key strength of Perry’s art. Maybe we’re not living a situation in first person, but we see it all around us where we live. London, with its gentrification, problems and extraordinary melting pot of cultures, is often the inspiration for and backdrop of the artworks’ scenes – for example in The Walthamstow Tapestry (2009) – and England is their undisputed protagonist.

This point was already made clear in 2014 with the blockbuster exhibition at the National Portrait Gallery, Grayson Perry, who are you?, which examined modern British identity in all its complexity and diversity. The Battle of Britain (2017), one of the largest works on show at Serpentine’s The most popular exhibition ever, proves the point once more. The tapestry presents an apocalyptic scene in a gloomy countryside. On one side, modest terraced houses face arid fields, where a dead man lies, his blazing car not far away. On the opposite end of the tapestry, a densely-trafficked flyover offers shelter to the homeless camping underneath. In the foreground, a youngster watches the scene in total apathy, while sitting on his BMX and sipping on a canned drink. In stark contrast with the impairment of the vision, an overarching rainbow, a common symbol of perfection and happiness, worsens Perry’s already brutal portrait by hinting perhaps at our denial of the country’s critical situation.

Grayson Perry is an extraordinary communicator able to convey challenging issues through an easily understandable, popular, symbolism. His exhibition at the National Portrait Gallery attracted a number record of visitors and now we’re left to discover if his Serpentine show will really be the most popular to date. However, whether the result, we’re deeply enjoying the performance.