The word ‘curate’ is, etymologically, rooted in an idea of care – from Latin cura ‘care’. Traditionally, the curator’s role has been the care of, and display of, the art object. And yet, increasingly, we see art without materiality, art as process, action, meeting and activity. Art that seeks to help, to change, to have use. Such activities subvert a modernist paradigm for formalism, medium speciality, hyper-individualism and object making. Despite this decline in the production of art objects, the curator’s commitment of care still exists. As social life itself becomes the medium, curators adopt a responsibility of care for real-life subjects.

The term ‘self-organised’ entered the vocabulary at the turn of the century. Developing from the critique of the cultural institution from the 1970s, it defines (within an art world context) groups, networks, collectives or individuals that operate outside of institutional structures. Responding to the urgent need for the realisation of alternative economies, the self-organised establish a resistance to the current capitalist production model. It is a method adopted by curators seeking to operate socially or politically, to ‘play an active part in society’ through community building, social projects or radical pedagogy.[i]

Kuratorisk Aktion (KA) is a Danish independent, anti-capitalist, decolonial and transnational curatorial collective founded by Frederikke Hansen and Tone Olaf Nielsen in 2005. They are informed by queer, feminist and activist approaches with a commitment to the curation of radical critique, curation as a form of activism. KA operate in the thick of it – working directly with marginalised groups and communities using processes of artistic production and art as a way of organising and thinking. 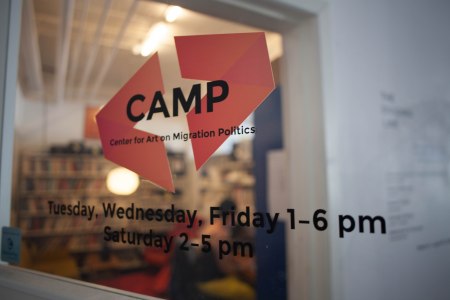 KA’s most recent curatorial action has been the establishment of exhibition space CAMP (Centre for Art on Migration Politics) inside Trampoline House in Nørrebro, Copenhagen, Denmark. Trampoline House is an independent community centre for refugees and asylum seekers, offering them support, friendship, legal counselling and a space to enter into dialogue and debate. It was formed by artists Morten Goll, Joachim Hamou and curator Tone Olaf Nielsen in collaboration with a large group of asylum seekers, art students, activists and professionals. As the organisers describe it, ‘It’s my house. It’s your house. It’s our house. Join us. It’s also your house’.[ii] Located within the centre, CAMP is a nonprofit and self-governing white cube gallery space, exhibiting a rolling two-year programme exploring issues surrounding migration politics. 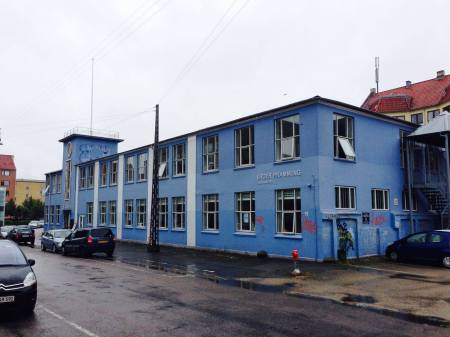 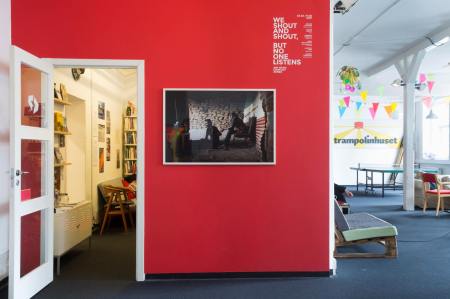 To date, the exhibitions have opened a dialogue on subjects including life in detention centres, the politics of displacement, border control and deportation regimes. CAMP exhibits work by both international established artists and by refugees themselves, responding to a lived experience. The current exhibition We shout and shout, but no one listens: Art from conflict zones (CAMP, Copenhagen, 2017) is both part art exhibition, part discussion event centring on the leading cause of forced migration: war. The exhibitions seek to bring attention, knowledge, debate and reflection on this contemporary global crisis as well as the issues of the migration system in Denmark.

CAMP lies physically at the heart of Trampoline House. As a visitor, therefore, you must walk through both the loud, busy, energised common area of the house as well as KA’s office and library in order to reach the exhibition space. Nielsen identifies this as a conscious decision. Through the creation of a somewhat intimidating experience, the visitor is forced to translate or identify the artwork on display to the real people, their everyday lives and struggles.

These two art projects (Trampoline House and CAMP) offer a dual and, potentially, opposed method to curating – the everyday social, community project against the symbolic representation and formal display. In one location, this project exemplifies social practice’s struggle between the global and the local, between reality and representation. While Trampoline House deals with the immediate everyday, the tangible and visible, CAMP contemplates the deeper structures. The question persists as to which should be afforded the greater attention. 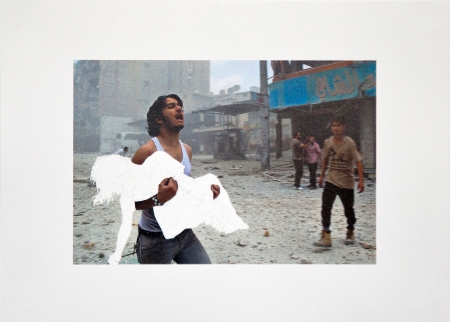 The untitled Images, Khaled Barakeh, 2014, a part of the group exhibition “We shout and shout, but no one listens: Art from conflict zones”

The untitled Images, Khaled Barakeh, 2014, a part of the group exhibition “We shout and shout, but no one listens: Art from conflict zones”

Art critic Boris Groys targets a major criticism of the use of formalist art for activist aims, that of ‘aestheticization’ and ‘spectacularization’ that neutralises practical aims in pursuit of the spectacle.[iii] In agreement, John Roberts wrote of artwork becoming ‘an empty signifier of political commitment, rather than actual and transformative intervention’.[iv] Nevertheless, such a departure from the formal aesthetic can seemingly void art’s visibility. As cultural theorist Stephen Wright, in Users and Usership of Art: Challenging Expert Culture (2007), writes: ‘envisaging an art without artwork, without authorship and without spectatorship has an immediate consequence: art ceases to be visible as such’.[v]

This tension of aesthetics and action is also a tension of time, of labour and maintenance. Self-organising curatorial platforms typically work within temporary and flexible structures. Ways of working that are deemed processual are often linked to this idea of temporality – a ‘project-based’ mode of working, a short-term duration. For there to be systemic change, however, action must be matched with maintenance. As Mierle Laderman Ukeles describes maintenance in her manifesto: “Manifesto: For Maintenance Art 1969! Proposal for an exhibition ‘CARE’” (1969) – maintenance is to ‘preserve the new; sustain the change; protect progress; defend and prolong the advance’.[vi] As Baraitser writes, ‘maintenance is the temporal dimension of care’, and thus care demands to be maintained.[vii] Trampoline House, as a project that deals with real life subjects, must maintain and follow a duration to match – the temporality and care of a lifetime.

KA, previously, only worked nomadically, moving from site-to-site and working on short term projects. CAMP is their first attempt to translate this in a permanent space. Whilst Trampoline House demands permanency, CAMP’s use of the exhibition format is inherently temporary. KA acknowledge the limitations to this model, and offer a potential alternative to CAMP’s future – to use it as a dialogue or research programme. To the asylum seekers and refugees that use Trampoline House, whether or not it is visible as an art project is irrelevant to them. The purpose and strength of CAMP, however, lies in its reflection on the structures and conditions which necessitated the development of a space like Trampoline House.

To the Day, Sandra Johnston, 2017, Performance commissioned by CAMP / Center for Art on Migrations Politics as part of the group exhibition “We shout and shout, but no one listens.” Photo by Britta My Thomsen 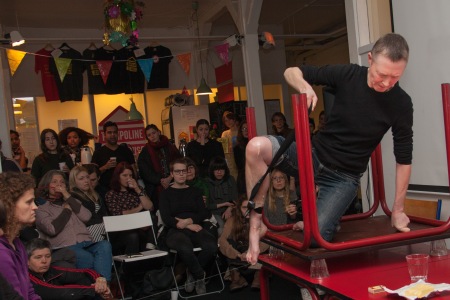 To the Day, Sandra Johnston, 2017, Performance commissioned by CAMP / Center for Art on Migrations Politics as part of the group exhibition “We shout and shout, but no one listens.” Photo by Britta My Thomsen

Curators have, historically, worked at some remove from the process of the production of art. Today, however, they have become producers and makers themselves. Trampoline House and CAMP are the creations of aesthetic ways of working and thinking. Despite managing a balance between what is socially or aesthetically purposeful, CAMP’s activities demonstrate an encouraging attempt to reveal truth through processes of documentary. Its dialogic aesthetic means it acts as an educational model, a means through which to inform the uninformed. It activates critical thinking and constructs alternatives. It operates to both expose local struggle, and comment upon global structures. The use of art is as an aid, and a means through which to translate, the practical politics.

CAMP’s current exhibition ‘We shout and shout, but no one listens: Art from Conflict Zones’ runs from March 3 – June 17, 2017, more information available at http://campcph.org/.

Alix Rothnie is an independent curator, writer, researcher and organiser currently based in Glasgow, Scotland, having graduated from the University of Edinburgh with an MSc in Modern and Contemporary Art: History, Curating and Criticism in 2015. She has worked for the Gallery of Modern Art (GoMA), Hidden Door Arts Festival, Edinburgh Sculpture Workshop and Edinburgh Art Festival and is a part-time community gardener and committee member for Glasgow Autonomous Space (GAS). Her texts have been published in exhibition catalogues and online platforms, such as the Imago Mundi project, and for Patriothall Gallery. Her research interests include social practice, community-based action, collectivity and collaboration, feminism and art in the rural context.

Featured image: Upekkha, Nermine Hammam, 2011, a part of the group exhibition “We shout and shout, but no one listens: Art from conflict zones”

Roberts, John ‘Art and the Politics of Time-as-Substance’ in Matter’ in Martin, Randy, The Routledge Companion to Art and Politics, (Oxon; New York: Routledge, 2015).

[iv] John Roberts, ‘Art and the Politics of Time-as-Substance’ in Matter’ in Randy Martin, The Routledge Companion to Art and Politics, (Oxon; New York: Routledge, 2015), 38.