Joining the urban demonstration that is reshaping into new forms of resistance, we carried out an unavailing protest, a public performance with much contemporary relevance beyond its social movement structure, in front of the Prime Minister’s Office, on the 22nd of March. I was interested in a socio-political engagement of artists within their own practices and with the idea of an indirectly political act. The invitation I made to Roxman Gatt reflected her own engagement with the diffused line between the private and the public. A Sculpture is a sensual, public love making performance that was delivered as a pointless protest.

Catinca Malaimare: Pointless Protest, Sculpturise me is a project that responds to the revival of the revolting spirit and the position artists take that focuses on responding to and engaging with contemporary demands. This renewed interest in what is ultimately a performance act created a new revolutionary spasm you can associate or disassociate with. Protests, and especially ones conducted by an all-female group, become a centre for ignorance and misunderstanding, the protesters more often than not receiving the status of troublemakers.

Roxman Gatt: The sculpture feels dead; it feels unheard and ignored, however, it still wants to live, the white sheet provides a safe space, in a scary environment.

A sensual movement is a form of confidence that is initiated by the collectiveness of those who are going through similar or the same situations. This also goes on for a while, yet there is no change. This only seems to accelerate and drive the sculpture to love harder, there is no violence, just hard-core love.

CM: There was no need for a transgression of the boundaries of the public space even considering the current political tensions at Downing Street and the surrounding area of Westminster. A space that is taken over daily by groups belonging to cultural and social minorities. Positioning ourselves in, and in close proximity to, a localised area, where racial campaigns are enforced and deferred, we touched on these issues obliquely. Our reasoning has been disputed but we are ultimately embodying all these forms of revolt and simplifying them to the essence, not by stripping them down of content or meaning, but by substitution.

This sculptural performance is no longer directed toward achieving a goal, nor driven by making a point, but it stands as a practice of inserting ourselves into a space of political tension as yet another minority. How did you understand this insertion of a pointless or action with a hidden meaning amongst the ongoing protests that deal with religious and social oppression? 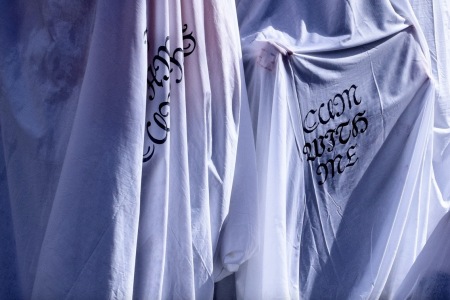 RG: It is quite challenging in the first place to create something pointless. Protests have been deemed pointless multiple times. However, in this case ‘the choice of being pointless’ wouldn’t have been the intention of the activists or group of people protesting.

It could have been referred to as being pointless by non-participants / observers who might not have been affected much by the cause being brought forward and do not have trust or faith in the government to initiate any change or look into the people’s concerns.

The sensual and intimate are vulnerable states to find yourself in and the decision to pin down a gathering to one place is deeming it vulnerable, marking the importance of our movements as important as the considerations of the space in which we performed.

Covering ourselves with duvets, a crude sort of disregarded possession; what did we reference in concealing ourselves in this manner? The duvets ultimately created the shapes, referenced the sculptural and monumentality of the location.

RG: In our case, we deliberately wanted to make a pointless protest. The idea of being covered in duvets with the above-mentioned phrases on them and turning ourselves into a silent sculpture, within that environment (10 Downing Street) seemed to make sense to me.

The pointlessness comes across in various ways in a very obvious way. However, there is an underlying tone to it, the sculpture is dormant for a very long time, but then it seems to start becoming alive by breathing gently, eventually it starts warming up and becomes more sensual, until it becomes frantic and starts loving in a very hard way. 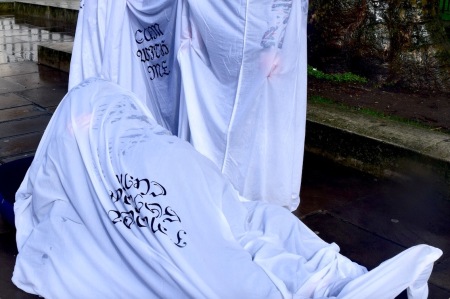 CM: In the early stages of the organisation, I was surprised to learn how much freedom you are given to organise a public demonstration. However, Pointless Protest failed to escape categorisation and it was labelled by the Metropolitan Police as a demonstration of the artists in demand of change.  An Art, A Sculpture, Sculpturise me, all respond to the revival of the revolting spirit and the position artists take that focuses on responding to and engaging with contemporary demands. In the spirit of the alternative, this form of pointless or demand less protest proposes a different and superior alternative to the daily protests.

RG: It might have been pointless in appearance, in its communication and in the context it was placed in, however, there could be underlying tones of some sad truth referencing the political situation in our present day.

CM: The collective idea that a protest is a form of trouble-making, denoting sectarian and aggressive inclinations on the protester’s part, is as dissociative as the attempts to belittle feminist voices. Unlike the common understanding of protesters as taking a negative stance ‘against’, we exhibited ourselves in an improvisation of fake love and physical intimacy exposed to the public scrutiny, with explicitly sexual content. Oscillating between an open and a private gathering, we considered a detachment from the idea of a collective protest that would accommodate uncontrolled masses of participants and ultimately, from subjecting the event to further categorisation.

RG: It is tired of being lied to. We seem to have to believe that the news shown on TV is the truth, however, we all know it isn’t entirely the case, however, it seems we have decided to settle for believing it.

CM: The title of a protest is self-explanatory and, it is often the case that these gather much a larger audience outside of its public manifestations that require the participant’s physical presence. A Pointless Protest is a suppression of all strategic considerations, a necessity for any revolutionary demonstrations where the protesters are playing themselves. A purposefully composed performance that considers spatial arrangement and contact with the audience as there is no formal, traditional relationship or environmental aspect that creates a clear barrier with the spectators. How did you engage with the idea of a pointless protest in the wider context of political tensions?

RG: We are footballers in a PlayStation game being controlled by a joystick…

Roxman Gatt is a graduate of Royal College of Art (London, UK) in Visual Communication. Roxman Gatt was a selected artist for Bloomberg New Contemporaries (ICA, London, 2016) and will be representing the Malta Pavilion at the Venice Biennale, (Malta Pavilion, Venice, 2017).

Catinca Malaimare is a co-curator for the student-run project space Black Box, at the University for the Creative Arts, for which she curated a series of events and exhibitions by David Batchelor, Sophie Mallett, The Underground Film Studio, Portugal. Her performance and moving-image practices consider the female body within a technological landscape, hybridisation and otherness.

2 thoughts on “Pointless Protest, A Sculpture”