Tom Milnes: Miwon Kwon said “…the space of our public conversations is now fully circumscribed by the camera or the media: life is footage waiting to be shot. Experience is not real unless it is recorded and validated through media representation.” Does your work deal with issues surrounding site and technology? Or Virtuality?

Elena Kendall-Aranda: Yes, my work does deal with site, technology and especially virtuality. I was interested in the possibility of virtuality as a tool that might allow us to go beyond representation as the only means of validation. In other words, rather than “representing” an experience, I was interested in imagery that could be embodied, and become an experience in itself. So much of our time in front of a computer is spent on the act of looking, establishing a certain distance between the subject and the object of vision… I wanted to breach that distance, and move from ‘looking’ to ‘embodying’.
To Miwon Kwon’s quote I would like to respond with another one, by William Mitchel who had this to say about our experience within cyberspace: “ ‘Inhabitation’ will take on a new meaning – one that has less to do with parking our bones in architecturally defined spaces and more with connecting your nervous system to nearby electronic organs. [1]” Ideally, to engage in my new project Ghost Town Initiative/Los Despoblados (GTI) –which allows internet visitors to go to GoogleMaps and virtually stroll through abandoned towns inhabited by “ghosts” from another time – viewers would be equipped with Virtual Reality Glasses, so that they might actually find themselves ‘inserted’ into the project’s virtual towns. This technology is now available to everyone with access to a smart phone or a computer; Google Maps even has instructions on how to make virtual glasses at home.  There is still an obvious distinction between that which is “virtual” and that which is “real”. However the intertwined nature of these experiences has come to define our daily life. GTI explores how the body’s place in cyberspace and in the real world embodies different experiences as the context shifts between the two places, and how such individual experiences can be interconnected with others. Blurring past and present additionally explores issues of collective memory as well as collective identity.

TM: Talk us through some of the processes you use to create the works?

EKA: The majority of my time in a project is spent doing research. When I get a new idea I want to work on, usually I find it has been sparked by a new place I have just visited, or by something I have read, or by a political event, etc. Once the idea takes root, I want to know who else has worked on similar issues in other fields, what has been written about it, and what has already been created. In general, I feel there is such an over saturation of visual content that I do not want to add to it unless there is something new I can bring to the conversation.
GTI was a step in a new direction for me. I had just recently finished writing a thesis on the artist’s body in cyberspace, and the web as a space was very much on my mind. This was the first time I was working with a digital camera rather than analog, and GTI’s imagery was to be directly added to a public and collective space: Google Maps. To be able to shoot the project and create 360 virtual tours, I first had to join their Local Guide Program and become a Trusted Google Maps Photographer. That involved taking a lot of 360 images everywhere I went before I could even begin to shoot and publish GTI’s imagery.
Shooting the 360 images in the abandoned villages was like a small film production: acquiring costumes, recruiting actors and volunteers, shooting all the material, and then publishing it on the web after a little postproduction. 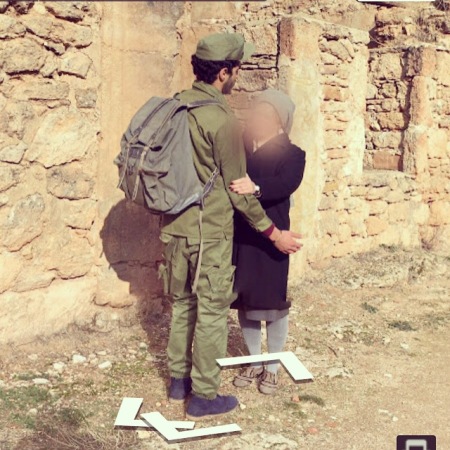 TM: Can you also talk us through the compositions of some of the shots and decisions behind them?

EKA: Since GTI was a project that dealt with the past, memory and the myths generated through the collective imagination, I tried to recreate daily scenes that might have once happened in these villages. A lot of the scenes came from stories my family told be about their lives in similar villages. I also tried to find as many photographs as I could depicting daily life in Spanish villages of the time, in order to base my compositions on actual scenes from the past. However I wanted to portray a diversity of events that occurred in a village, and for the project to work, all actors needed to maintain the exact same position for hours and still look natural rather than as if striking a pose. This could have been a disaster as many poses were very hard to maintain for a long period of time. One of the scenes required the actress to balance a large tray of bread on top of her head for three hours. Ultimately I was very lucky that most of the people that portrayed the ghost villagers were part of Juan Carlos Prieto’s theater troupe: they were wonderful to work with and did a great job, especially given that it was freezing during most of the production!

TM: Do you see a future for this project beyond what is exhibited on DAR? If so, where and how?

EKA: I do! There are still a lot of abandoned villages I want to add to the project, each from a different region and each with its own specific traditions. Besides visiting the towns through Google Maps, I think it would also be interesting to create a physical exhibition of the project where the towns would be visible through a system of projectors, and people could physically walk through their virtual representations. If this were possible, rather than being an invisible and individual experience, the visit would become visible and collective. The next step would be recording such visit so that the new visitors themselves could come to be included within the imagery of the town, thus becoming, in a sense, part of the history of the village itself.

Elena Kendall-Aranda is an artist living and working in Madrid, Spain. Her work is primarily focused on the construction of the feminine in contemporary western society. Through the investigation of feminist theories, social biases, Internet culture and mass media practices, she addresses issues of identity and embodiment with photography, text, and new technologies. By conjuring narratives that coalesce and collapse, Kendall-Aranda seeks to use online applications that can operate simultaneously in physical and virtual space to create new meaning that makes us reflect about our social-political culture.

Tom Milnes is an artist, curator and Ph.D researcher living and working in Oxford. His work and interests explore our relationship with technological cultures. Milnes’ use of site-specific work exemplifies different cultures responses to technology with works actively confusing time frames. Milnes has exhibited internationally including: Gyeonggi International CeraMIX Biennale – Korea, AND/OR – London, The Centre for Contemporary Art Laznia – Gdansk, and W139 – Amsterdam. This year, Milnes was awarded the 3D3 scholarship for research at Falmouth University. Milnes was recently the Sandarbh International Artist-in-Residence and Kingsgate Emerging Artist-in-Residence. He is the curator and founder of the online platform Digital Artist Residency.