Until the 15th of January, at The National Gallery, you can enjoy a wonderful exhibition that contains more than 50 paintings, belonging to both famous museums and private collections, that explore the work of the revolutionary painter that changed the course of the history of art: Michelangelo Merisi da Caravaggio. You will be able to observe the influence that Caravaggio had, not only on his contemporaries, but also on many followers who were seduced by the naturalism and the dramatic lighting effects seen in his paintings.

Caravaggio’s first years as a painter he specialised in still lives of flowers and fruits. A pioneer in the use of the chiaroscuro technique (lighting effects strongly contrasted), his paintings are a mixture of darkness and light, of violence and drama quite different from those of his contemporaries. He seemed to take pleasure in depicting characters with great realism although the surroundings may be more like a dream and sometimes even recognisable. He did not spend his time in offering tidy and pleasant figures and to the horror of his critics his models were ordinary people with rough faces. On the contrary Caravaggio was like a wildfire burning dangerously throughout the cities he lived in. He even had to flee from Rome charged with the murder of a man. Thus he departed first to Naples, then to Malta and Sicily. He finally ended his days dying alone in a small town on the coast of Italy. His untimely death -at the age of 39- deprived us of the possibility of delighting ourselves with more of his work.

This exhibition opens with Caravaggio´s earliest paintings as an artist, when he was exploring his art and the way he wanted to present it to the world. Paintings such as Boy Bitten by a Lizard appears to record acute emotions like surprise or fear in a very theatrical composition. In Boy Peeling Fruit a great amount of discussion has aroused as to the nature of the fruit and its meaning. On the other hand the boy is not rustic but clean and well dressed with a white shirt that stands out in the total darkness of the background. In both cases they depict the way in which Caravaggio showed interest in human nature. The realism and naturalism that was later passed on to his disciples is already present in these paintings.

In this same room we find The Cheat with the Ace of Clubs by George de La Tour where each character is looking in a different direction, one even seems to be looking at the viewer directly as though sharing a secret. All eyes go to the players hands, from here back to the opponent’s eyes and you feel part of the scene watching those devilish eyes, the twitching of the hands and the open disclosure of the innocent young dandy’s cards and who is about to be cheated. You feel you ought to warn him, but you can’t.

In the following rooms we find more paintings made by his followers like Orazio Genitleschi’s Rest on the flight to Egypt in which the main carravagistic influence found is in the way the biblical story is told: almost as if it were an every day event. The donkey seems to be grazing unaware of any danger and Mary is feeding her child holding him carefully and gently while He stares curiously at us. On the other hand, Saint Joseph is lying profoundly asleep on a heap of sacks.

Another follower of Caravaggio was Giovanni Galli, known as Lo Spadrino, the painting Christ displaying his Wounds is one of the most striking works in the exhibition where we find Christ holding his wound apart and questioning with a glance at the viewer that makes him feel as the doubting Thomas.

We cannot forget Giuseppe de Ribera with his infinite darkness in Lamentation over the Dead Christ where we find Mary Magdalene bowing over Christ’s feet in an attitude that also takes us down to examine them closer while the white corpse glowes in the silent darkness. The way he paints The Martyrdom of Saint Bartholomew is a great work of art of nonviolence. Your imagination takes you to picture the torture he is going to suffer simply by looking at the knife his torturer holds in his hand and by looking at his ageing flesh that already seems to be falling apart from his arms stretched out to heaven.

You can see how much influence religion had in Caravaggio´s work and in that of his contemporaries. Paintings such as Saint John Baptist in the wilderness show Caravaggio`s increasing interest in religion and its characters. The main character holds his staff in such a bold manner that it would seem to be a broadsword whose shadow crosses over his neck predicting his future death which will later on be portrayed in Salome receives the head of John the Baptist. The way he so marvellously plays with light and darkness plunges the viewer into the canvas. 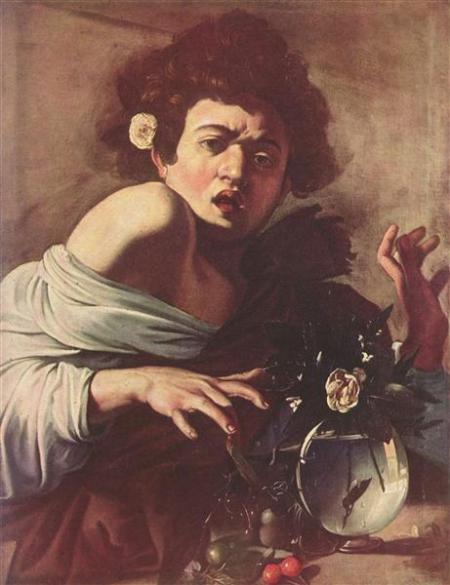 One of the main pieces, and one of his most famous, is The taking of Christ where we can find a great contrast in the mass of black and red in direct contrast with the white brightness of both Judas’ and Jesus’ flesh that brings us to a close up in the betrayal set upon Christ. There is so much movement and detail, it’s full of drama and helplessness. On one side, Caravaggio paints himself holding a lamp next to Judas. This part of the painting is almost in complete darkness, with the striking hardness of the metal armours the soldiers are wearing in the foreground that reinforces the intense dramatism and enhances the powerful story told on the canvas. On the left side, all the light springs up from Jesus’ face who clasps his hands in a striking resemblance of a prisoner carrying handcuffs. It is darkness vanquished by light!

As the title of the exhibition implies – Beyond Caravaggio – the majority of the paintings on exhibit belong to his followers, his imitators and his friends. Including a couple made by his lover Cecco del Caravaggio, model in several of his paintings. It’s a show of work influenced by this great Italian painter from the Renaissance period. Now, four centuries after his death his art continues inspiring, astonishing and surprising us all. In this comforting show, surrounded by all this contrast and realism one could remain for hours on end. Don’t miss it!

Lucia Vázquez Bonome lives and works in London. She holds a degree in Advertising and an MA in Creative Advertising, both issued in Spain. She has undertaken two screenwriting courses at Morley College in London. While studying advertising, she discovered her passion for writing which translated into her professional life: since 2014 she has written articles for the website ‘The State of the Arts’ where she write reviews on theatre plays, movies, books, art galleries and interviewa artists belonging to different artistic fields. Her love for storytelling led her to compile a collection of short stories into a children’s book entitled “Un Verano Mágico”(A magical summer) which was published in Spain and has been translated to English