As social media becomes increasingly integrated into both our personal and professional lives, artists have been more and more concerned with revealing the confusion between online and offline identities, however, rare are those who have pushed it as far as Amalia Ulman. The Argentinian-born contemporary artist gained widespread recognition for turning her online persona into performance art in Excellences & Perfections (2014), a five-month Instagram performance in which she pretended to be a consumerist girl turned sugar-baby through carefully scripted posts. After fooling everyone –including the art world itself– it was dubbed the first “Instagram masterpiece” and featured in two blockbuster shows last year in London – Electronic Superhighway at the Whitechapel Gallery and Performing for the Camera at the Tate Modern. Her recent work includes International House of Cozy (MAMA, Rotterdam, 2015), a short porn film exposing the commodification of life and Annales of Private History (Frieze Art Fair, London, 2015), a moving-image project focused on diary-based narratives.

Reputation at the New Gallery in Paris was the IRL version of another Instagram performance that is currently taking place -and nearly arriving to an end- on the artist’s account. This time, “Amalia Ulman” plays the role of a pregnant white-collar worker who adopts a pigeon to overcome her boredom and progressively loses her sanity against the backdrop of the American elections. The project takes the form of memes and cartoons, tweaked WikiHow images and short videos about office life boredom that gradually take on a more menacing tone. The posts’ dominant colours – red, black, grey and white –contribute fully in creating this uneasy atmosphere while acting as obvious signifiers of the plot. 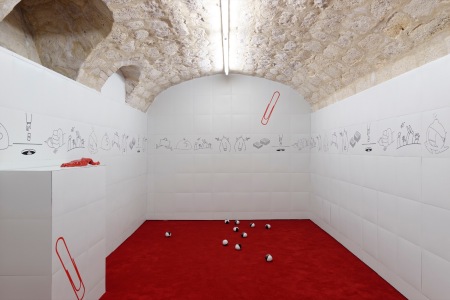 View of the installation “The Park” / Photo credit: New Galerie

In the New Galerie, Ulman created an installation divided in to three rooms -Bob’s Office, The Park and Bob’s Temple – that simultaneously parallel and complete the social media performance. The first room replicated the character’s office cubicle: among office depot supplies, trails of shoes, slices of bread, love poems for “Bob” the pigeon and binders entitled “Excellence / Perfection / Privilege” reveal office life boredom and societal pressures. In the second room, the alienation was more palpable as cartoon-inspired drawings represented the workspace as a place of deceptions, betrayals and threats. Then, the viewer entered what seemed to be a reflection of the character’s frenzy: in a small room covered with red curtains – an explicit reference to the show that is constantly taking place on @AmaliaUlman – Bob the Pigeon was transformed into a god-like figure and a paper clip turned into the symbol of this strange adulation. By recreating the environment of a social media character and mimicking the online performance’s narrative structure from office life boredom to dystopian delirium, the installation work brilliantly blurred the lines between fantasy and reality while merging traditional curatorial methods with Internet-based practices.

Perhaps one of the most fascinating aspects of Ulman’s work is its use of personal narratives to tackle broader issues: through the prism of a persona, Reputation uncovered the gendered logics of power and influence that underlie both the professional and political spheres. Using a wide array of languages – from Internet Art to video, performance and installation – Ulman decodes the tropes of modern life in disturbing works that put us face to face with our own narratives and contradictions.

Audrey Kadjar is a  Berlin-based visual artist as well as a freelance creative and art writer. She studied the humanities in France before completing her MA in History of Art at University College London in 2016. Her past work experience includes positions at the Cultural Services of the French Embassy in the U.S., the Centre Pompidou and Autocenter Space for Contemporary Art. Audrey is currently developing art and publishing projects. She is particularly interested in body and gender representation, the uncanny and the dynamic interplay between art and technology.