Out of Sight was a studio-based project exploring the potential of the unrealised. For the month of November 2016, artist Giuseppe Lana occupied the space at Five Years to reflect on his studio practice in a collaboration with curators Amy E. Brown and Miriam La Rosa.

The perfect idea behind Out of Sight was to explore the notion of ‘unrealised projects’ during a month-long studio residency. Traditionally, the studio is seen as the place where ideas are formulated and evolve. However, the inevitable separation between the artistic process and the final result means that not all ideas translate into finished works. In our increasingly mutable and accelerated life, this is typically linked to a lack of economic resources, space or time. In other words, an endless number of projects exist in the author’s head, but never find room to be developed in practice. Defining something as unrealised is to describe it as incomplete or unachieved, but it can also suggest a fully developed concept, a perfect idea, which has not yet found its physical manifestation. Hence, when presented with the impelling necessity of giving a material shape to our thoughts, we recalled Socrates. He refused to write, convinced that the only way to gain knowledge was by means of an active dialogue. Knowledge for him was a social practice, which could be exclusively achieved through discussion and debate. Writing, on the contrary, was merely an imitation of the original concept. This encouraged us to begin a journey driven by interminable brainstorming sessions and conversations.

In a publication entitled The Studio – an anthology of collected texts by writers including artists and curators – we furthermore came across some revealing words by French philosopher Henri Lefebvre: ‘It is never easy to get back from the object (product or work) to the activity that produced and or created it. It is the only way, however, to illuminate the object’s nature, or, if you will, the object’s relationship to nature, and reconstitute the process of its genesis and the development of its meaning.’ [i] With these considerations in mind, the space at Five Years became the residence of a collaborative, discursive, and communal experience, which would inform the comprehensive realisation of an idea. We decided to especially foster one specific unrealised project, which derived from Giuseppe’s previous investigations into the relationship between man and machine. In particular, this concerned the role of car as an object and symbol of both popular culture and human evolution, a combination of identity and technological progress.

‘We invented the machine, the robot, the man as a machine. Now, we are trying to humanise the machine, to make it similar to a man, turning it into an anthropomorphic object. We are trying to humanise machines as we have become too dependent on technology. In fact, we are becoming technology. We don’t want to live in real life but, in real life want to make another life.’ [ii] A car can be somewhat seen as an extension of the human body, a private and deeply personal space. However, whilst its practical use varies in different countries, it often appears as a reflection of the economic and cultural structure of its location. In a place such as Sicily, for example, it is not conceivable to move around effectively without a car; public transport is scarce and road infrastructure is not well maintained. There the car can be considered a basic need. Meanwhile, it is also a status symbol, which becomes the mirror of one’s own financial worth.

Arguably, in a city like London, cars are luxury goods. Public transport is king and affording a car can often mean being wealthy enough to own a property with an accompanying parking space. These parallels between car and country, object and society, human and technology can be further extended upon when widening the scope to more current political topics and popular-culture. Likening Germany to the many cars it produces – and when considering its recent position as powerful leader of the EU – the highly technological substance of the car as its icon does not seem to be too much of a stretch of the imagination. Similarly, for the less well-favoured (at least in contemporary European times) Greece, ancient monuments represent a nation whose financial insecurity has veiled its history as the cradle of western civilisation.

The Parthenon is undoubtedly the ultimate symbol of ancient Greece’s cultural power while the car is the ultimate symbol of Germany’s engineering prowess and, with the United Kingdom’s possession of the Parthenon sculptures, it was with some fluidity that our perfect idea became that much less perfect and that much more real. The car quickly turned into the vehicle – a platform for discussion – as we piled images on to the walls at Five Years, ironically (and deliberately), mimicking a frieze. Like our fragmented discussions, the configuration of the cars began to imitate an intermittent line – not unlike Morse code – as we drove to the British Museum in a rented VW Polo, attempting to realise our unrealised project. 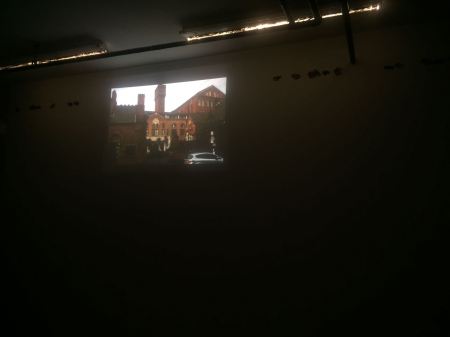 Closing event for Out of Sight (2016), Five Years, London

Giuseppe Lana was born in Catania in 1979 and currently lives and works in London. He studied Fine Arts at AA.BB of Catania (IT) where he graduated in 2006. His work presents a strong autobiographical, anthropological and political element. Through the use of several media he aims to investigate issues such as aesthetics and identity, whilst focusing on notions of time, data and memory.

Amy E. Brown and Miriam La Rosa are members of Five Years and collaborate in curatorial projects, which unfold through writing, exhibitions and events exploring the notions of dialogue and performativity.

[ii] This is an edited extract from a conversation between Giuseppe and us.