Digitalised information has lately increased its domain and influence, relying on a hypnotising textual abundance derived from the conceptual and practical premises of its character: global extension, ubiquity, interactivity and democratic sharing. The internet and its offspring embodied in the increasing number of social networks, is the third millennium way of producing knowledge. We are already totally part of the game and nevertheless we are still incredulously fascinated by the subtle mechanisms, as much as the realms of culture and visual arts are interested in unveiling them.

Molly Soda’s practice responds to the broad preoccupation with the changing of global social dynamics, and for her second solo exhibition at Annka Kultys Gallery, she proposes a new selection of projects by opening the door of her MacBook memory. Turning the constant state of surveillance we are exposed to into a creative tool is the strategy that underpins Soda’s practice, and in doing so, the young American artist offers her followers a meaningful insight into contemporary imagery.  Social networks are everyone’s guilty pleasure, fictitious places where we propose ourselves as persona and we seek fulfilment of our fantasies. Molly Soda appropriates this new cult of online personality to express concerns about gender, desire, pleasure and freedom of expression.

Her work relies on her own presence and, appointing herself as sole protagonist, it constantly breaks the boundaries between private and public, fiction and reality. Her intervention in the gallery space is not just a presentation of her public character but also an attempt to unfold the ‘behind the scenes’ of her on-line persona. In the video All by myself (2016) displayed at Confort Zone, Soda presents 18 hours of footage consisting of materials drawn from her laptop’s camera archive, images taken from the intimacy of her bedroom and not intended to be shown publicly.

Disregarding the limit of her own privacy, the artist collects on the walls, alongside her videos and pictures, a sexualised and cruel system of textual responses triggered by her internet persona, a wide array of comments/ texts in which she is highly criticised by other users, or, online worst case scenario, stalked by the obsession of a creep.

Molly Soda seems to embrace fearlessly the consequences that artistic involvement in performance have on the physical and psychological integrity of the artist’s body.

The fake innocence of the pink atmosphere that surrounds her work, makes her femininity the conceptual base for her entire practice. Playing along with stereotypes about gender, Molly Soda discards those same clichés, by creating unexpected glitches in her rosy vision. In her system, make-up tutorials coexist with her body hair, gracious and doll-like objects inhabit her messy bedroom, her childish sassiness goes hand in hand with a proclaimed feminist awareness. The contradictions of female nature are sublimated by high doses of narcissism and empowered by the internet as a democratic tool for self-expression.

If the visitors miss that crucial pleasure of clicking, of the dérive set in motion by the system of links, in the gallery space Soda’s practice receives an official aesthetic consideration, highlighting the coherence of the overall narrative. 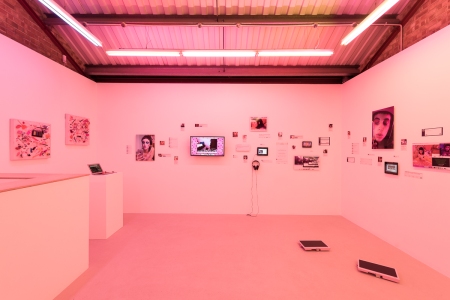 Angela Pippo is a curator based in London. She completed her MA in History of Art in 2013 in Milan and she is currently attending the MA Curating the Contemporary at London Metropolitan University and Whitechapel Gallery. She collaborated as researcher and grant recipient with international institutions such as the Antonio Ratti Foundation (Como, Italy) and the Institute of Contemporary Art (Sofia, Bulgaria). She is co-curator for Testing Ground programme 2016/ 2017 promoted and hosted by Zabludowicz Collection, London (opening January 2017).