Rebecca Edwards, of arebyte, interviews artist Rosana Antolí whose residency, and current exhibition Virtual Choreography, maps the local area by researching the common gestures and specific behaviours of Hackney Wick. By asking different members of the community for their involvement, Antolí was able to create what is described as “an open database of everyday gestures” that reveals the hidden choreographic commands of the patterns in the average day.

Rebecca Edwards: Hey Rosana, tell me a little bit about Virtual Choreography and what it means.

Rosana Antolí: Virtual Choreography is a project I’ve been working on for the last few years which I’m presenting for the first time in London at arebyte Gallery. The project has two parts; the virtual side where we are developing the mapping of an area, in this case it is Hackney Wick. My aim is to capture the movements and gestures that people in the area make so I can have the identity of the area through movement. With the captured movements I will create the choreography of Hackney Wick.

RE: What is the significance of the ‘everyday gestures’ you talk about?

RA: The everyday gestures are the movements that we do every day; maybe in an unconscious way or maybe automatised because of the rhythms of our lives. We are performing something, we are dancing. For me it was simply the question of what is the main gesture you perform every day?

RE: East London, and Hackney Wick more specifically, have been through many changes in recent years, starting with the influx of regeneration around the Olympics set-up back in 2012. There is much confusion about the future of such places in terms of sustaining a viable artistic working community. Is this why you chose the area?

RA: I chose the area for two reasons. One is because this is where the gallery is located and in a way the work is very site-specific. Another is because Hackney Wick is a very eclectic area, maybe because of the transition it is going through. It has different communities of people and these people will undergo change too. This means the work is constantly evolving to keep up with the old and new inhabitants, and so in five years this work may act as an archaeological capsule of a once thriving area.

RE: What do you hope to gain by taking the exhibitions to different cities?

RA: This project is very ambitious because I want to take it to as many cities as possible. I want a global sensation of how an identity of a place is created solely by movements or gestures.

RE: How does the online platform work?

RA: The website is virtualchoreography.com. Anyone who enters can see an explanation of the project, a map of the world and instructions on how to take part. firstly, you’re asked to create a one-minute video of your chosen gesture, then you locate where you are on the map and then upload it to that location. I think it will be interesting to see how these specific communities are formed.

RE: You have mentioned that the project has no end date. This idea of a never-ending exhibition is interesting, especially if we consider online exhibitions, virtual reality and the way in which the internet is a preserver of such things. Do you hope Virtual Choreography will continue forever?

RA: I like the fact that once the exhibition is over the project will continue and keep on growing. This will happen in a very uncertain way which is exciting when thinking about duration and lifetime of a work. this point is interesting because I always like to question or critique how exhibitions in the public space or institutions are made. It reminds me of conceptual artists from the sixties, like John Cage, Merce Cunningham or Alan Kaprow., but revisited by technology and virtuality which is very much linked to our time.

RE: You’ve planned some exciting events in relation to the exhibition. Can you tell me a little more about them?

RA: There will be three events during the exhibition. One will be a workshop with VIPA who is a virtual architecture performer. They will work with people in the space in relation to the architecture and the bodies; a look at how we embrace architecture and each other through performance.

Another is a walk with a group from London called Talkative, and the final event will be a walking tour with Richard Wentworth. Richard and I will have discussions around architecture, movement and performance which occurs within the city. This will be hopefully be broadcast on the radio. 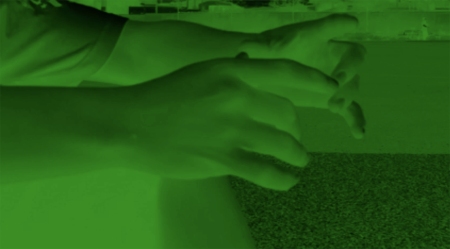 RE: Are you a contemporary flâneur?

RA: A big part of my practice is walking which also forms a large part of my research. The mapping I am doing for this exhibition requires me to be out in the area engaging with people. The more I go out the more people start to recognise me and thus a symbiotic relationship is formed where I am no longer an intrusive element in their day. I think it’s necessary if you want to do a project which requires public space to be immersed in your environment.

RE: The exhibition is very similar to our next show by Gretchen Andrew in the way that it deals with movement, action and repetition. One of the main differences however being the choice of involving the community. Explain why ‘mapping’ the community is important for you?

RA: For me, this work makes no sense without the participation of the community and the social engagement. My thesis was about social choreography in the wider sense but this project looks at specificities, and it relies on the engagement and participation of others.

RE: You’ve recently had a solo show at the Joan Miro Foundation in Barcelona. What was this work about? Does the work in Virtual Choreography bear any relation to the work you have shown in Barcelona and does it form part of your larger practice?

RA: All the projects and exhibitions I do form part of my larger practice in the way that they always relate back to three things; choreography or dance, art and the everyday. I’m always questioning movement or how we move and it’s this which informs what narrative I can best reflect that. For my show at Joan Miro Foundation I started by asking if it’s possible to create a continuous movement. There was video, drawing, sculpture and performance which formed a large part of the project. There was also an aspect of participation, as there always is in my work, whereby I invited people to collaborate with me. I wanted them to give a performative reply to the exhibition, to keep the exhibition alive in a sense. This questioning into ways of making an exhibition relates heavily to the show at arebyte where the virtual is under investigation.

RE: Tell me a bit more about winning the Generaciones 2017 Art Prize. What did you submit, and what does winning mean for future exhibitions?

RA: I have a show as a result of winning the prize in February next year in Madrid. Each artist who applied presented an existing or new project. My proposed project was a new work, again asking questions of movement and gesture, in the form of a pendulum sculpture. This idea of suspension within movement is something I like because of its political and social connotations around moving back and forth between points.

RE: In a utopian world, what artist would you most like to collaborate with?

RA: There are many visual artists I would like to work with but there are also many collectives which I would like to join to see what would happen. Composers are always interesting for me; to be able to see what would come of an interaction between my practice and sonic works would be great. David Lynch would be another name because I think the outcome of spending time with him would result in a very captivating dialogue.

RE: What’s next for you?

I have a few projects coming up. In November and December I have a few shows in Spain; one in Bilbao and another in Artium Museum in Vitoria which is a commission for a project called Grey Flag. In January I have a solo show at Espai Tactel Gallery in Valencia, then in February it’s the Generaciones exhibition and later in February I have Arco Art Fair in Madrid.

Virtual Choreography First Gestures Virtual World Map/ Rosana Antoli runs from the 8th of October to the 8th of November at arebyte, London.