During the London Design Festival 2015 I discovered Ariane Prin’s freshly launched hand- made homeware collection RUST at Herrick Gallery in London and I was immediately fascinated by its appeal and the surprising smooth haptic response of the rusty vessels. The RUST collection designed by the french-born product designer has been widely celebrated by the press, in magazines such as Wallpaper, ELLE Décoration, Dezeen, Design Boom or CASA Vogue and is now being sold across the world (Prin, 2016).

What makes her collection so special is the choice of material, that pays tribute to the earth and its endangered environment. During her studies at the Royal College of Art Ariane Prin found her very personal leitmotif, the narrative that connects all her projects since – transforming other peoples left overs and waste into precious raw materials (Buchmann, 2016). Looking closely when others look away has allowed her to not only detect a design process lead by experimentation and discovery but mostly to create value where others create waste.

In the book ‘Design by nature‘, Maggie Macnab refers to ‘ethical design’, a design culture following the three ethics: caring for the earth, caring for people and choosing cooperation over competition (Macnab, 2012, p.70). Looking at Ariane Prin’s design approach one can see, she considers all three ethics in her practice. By trying not be wasteful with materials, she is conscious about her impact, in other words, she cares about the earth.

On her website Prin states ‘I analyse the place or the area I am working in, the people that live and work there, their culture, their needs, and I use their waste as raw materials for specific production for this community’ (Prin, 2016). By working with a range of professionals in her area, like key cutting and metalworking workshops across London for the RUST range, she follows fair business practices, supporting those close to her. 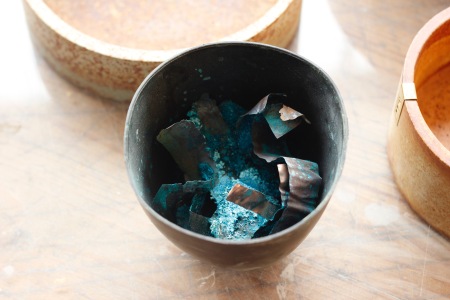 ‘Solid waste generation rates are rising fast, on pace to exceed 11 million tonnes per day by 2100.‘ (Hoornweg, 2013) On its website the World Bank explains, the growth will eventually peak and decline depending amongst other things on waste reduction efforts and changes in consumption (World Bank, 2016). The EPA agrees, ‘making smart choices about what we buy, how we use it, and how we dispose of it, can make a big difference in the amount of waste we produce and the greenhouse gas emissions associated with our consumption.‘ (EPA, 2016)

What Prin does on a small scale, big companies are facing increasingly on a wide scale. The escalating public and governmental concern about climate change, industrial pollution, food safety, and natural resource depletion are pushing companies to act. Factors such as carbon dioxide emissions are becoming central to a firm’s performance (Lubin and Esty 2010). The authors of the Harvard Business Review know sustainability is an emerging ‘megatrend’, forcing fundamental and persistent shifts in how companies compete (Lubin and Esty 2010). Especially creative industries are meeting the needs of a sustainable product culture by incorporating the latest scientific discoveries into their work, aiming to connect research, technology and design within the allocation of materials (Peters, 2011, p.6).

Working in a studio in London‘s old warehousing and industrial zone, Hackney Wick, means working in ‘Schlaraffenland‘ (German for ‘land of milk and honey‘) for someone who collects found industrial materials and objects left behind on the streets. But Prin stays strong these days, focussing on metal dust from key cutting for her rusty range of cachepots, trays, vases, bowls and boxes (Prin London, 2016). ‘There is so much more to discover within this design approach and I don‘t believe in running after fashion trends‘, Ariane Prin says (Buchmann, 2016).

Again an important decision for a product designer, who easily could get caught up in a design process focussing on trends and seasons, paying into the mass production and its fatal effects (Lubin and Esty 2010). ‘Indeed, in today’s unsustainable world of goods, where products are desired, acquired, briefly used and then promptly discarded, consumption and waste are rapidly spiraling out of control, with truly devastating ecological consequences.‘ (Chapman, 2012) 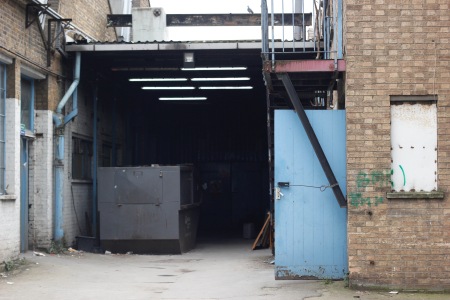 Prin‘s approach follows a design for durability, aiming to increase ones product life and creating an awareness for fast consumerism and materialism. When looking at the developments of the tableware and giftware market it becomes apparent that not only ceramics have become a fashion item, changing their look with seasons. The fashion and home industries is built upon its consumers, who grow bored or ashamed of their often perfectly usable products at home, throwing them away in favour of their shiny new offerings. There are only a few manufacturers who build products that last (BuyMeOnce, 2016).

Her skills as a product designer can also be found in the simple shapes, the well curated pattern mix and the craftsmanship of her vessels. Each unique piece takes about two days to produce, pouring metal dust mixed with plaster and Jesmonite resin into her one-off moulds, adding another extra four months for the metal particles to oxidise (dezeen, 2015). The composite material, which has rarely been used in the interior contexts, allows Prin to work with a material that looks natural and inspires questions about what it is and how it is made. It also lets her add anything she wants to create a special effect, she says (Lorenz, 2016).

Every RUST product shows a unique texture, varying in colour and intensity. For Ariane it is all about catching the perfect moment, when the oxidation reached its most interesting state. That is the moment, when she stops the oxidation process by applying high quality varnish as visible in Stopped oxidation (2016) (Buchmann, 2016).

Oxidation in the process (2016). Photographed by Anke Buchmann. 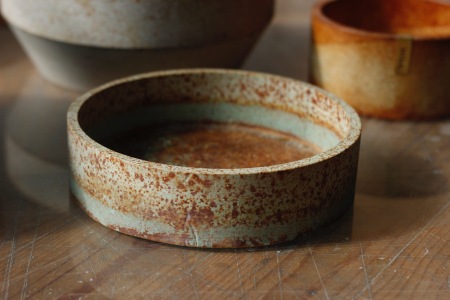 The shapes of the RUST range are extremely simple. ‘I wanted to let the material and its visual articulation be the heroes of this series of products.’ (Dezeen, 2015) Simplicity functions here as a by-product of a good idea and modest expectations, allowing her to reduce information to its essence (Rand, 2012 and Macnab, 2012).

Ariane Prin shows us with her RUST collection a way of reducing the amount of waste produced and changing consumer attitudes towards sustainability and waste more broadly. She manages to ‘reduce, reuse, recycle‘, all important factors of a sustainable design process by choosing a material mix based on Jesmonite, which gives her the freedom to add waste materials. With her product range she is acting as a role-model able to inspire others, opening a discussion about consumerism, materialism and resources.

Anke Buchmann was born 1978 in Rostock, Germany. She studies Ceramic Design in London at Central Saint Martins. She is the editor in chief of claystudies.com, based in London and Berlin.