A window is multifunctional, on practical and also metaphorical levels. It can be a barrier that separates the public from the private, the inside from the outside for instance. A window can both hide and expose.  Windows are viewfinders unveiling mysterious realities, both contrived and organic – they are shifting frames that capture the evolution of material in space as it occurs in real time.  Sometimes these shifts are subtle, like the settling of dust, while others are dramatic and conspicuous. Indeed, if one watches a window for long enough, an evolutionary process of some description is bound to occur. 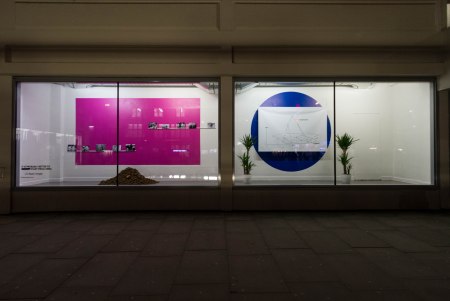 It is Probably Better to Start from Zero is an ongoing curatorial and artistic experiment that both highlights and utilises this notion of the window as a mechanism to capture transformation. The Window Space is fundamentally a large ‘vitrine’ not dissimilar to those used for showcasing seasonal fashion and commodities in a commercial context, but repurposed as a space for the display of contemporary art. It is Probably Better to Start from Zero activates this space as a viewfinder, using it to encapsulate and trace both subtle and dramatic developments as they evolve uniquely in artistic practice, artistic production, and curatorial practice respectively.  The project is now past its midpoint and, since October 2015, four UK-based artists have been given the opportunity to display work that is both current and ongoing.  In the last months, Georgia Spickett-Jones, Juan Crespo, Inês Marques, and Lauren Goldie have each sequentially and separately displayed work in various stages of completion and development.  Each artist has, or will have, two distinct opportunities to exhibit their work with several weeks separating the former from the latter – the idea being that both audience and artist can develop an awareness, if not a relationship, with the work as a ‘living’ and evolving entity as it’s displayed in public space. 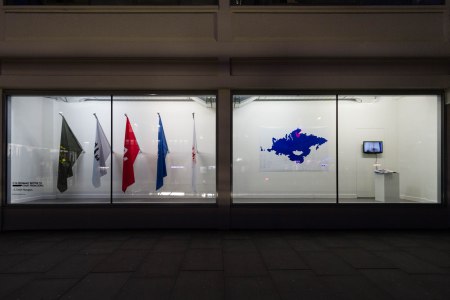 Theoretically speaking, at least arguably, It is Probably Better to Start from Zero attempts to demystify the process behind the making of contemporary art; it aims to reveal the awkward in-between space that exists amidst the emergence of a concept in an artist’s mind, and the materialisation of a ‘thing’ deemed as a contemporary artwork.  Visitors are able to see a work in multiple stages of incompletion, contrary to the conventional experience of seeing polished and ‘completed’ works at their highest stage of realisation, when (presumably) they convey the artist’s intentions with refined accuracy, concision and awareness. Instead, we are presented with sincere displays of work that are conscious of their own fallibility, in that their ‘end products’ are yet to be determined by the artists themselves. The project therefore has intent to acknowledge the artist not as creative ‘magician’ or elevated intellectual per se, but as practitioner, problem solver and maker.

The degree of success achieved by the project to convey this intent is debatable; at first glance, the installations, or displays if you will, are economical in what they reveal of this very deliberate process-based approach. The refined presentation of the works prompts an immediate assumption that the works are in fact complete, as they appear polished in their readiness to be exhibited. Perhaps (and this is simply speculation) this reveals a lingering dependency still held by artists and curators of today – namely to the idea that a degree of ‘completeness’ is expected, or to be attained in practices of exhibition-making, in order to command a desired authority and air of professionalism. In the case of It is Probably Better to Start from Zero, one must read about the project, visit the website, or in the very least pass by the site regularly enough to notice that the rotating displays are incomplete evolutions of one’s previous, and that the works are still in the process of being realised.

Regardless of this perceived ‘shortcoming,’ there is something to be said for the innovative, courageous, and decidedly relevant attempt to illustrate both art-making and curatorial practice as process-based activities, through the making of a series of exhibitions. The project draws our attention to an embedded interest found in contemporary curatorship, which aims to cultivate close relationships between curators and artists in order to facilitate the ongoing sharing of creative, contemporary and intellectual ideas through voicebularies of art and display. A viewer, a committed viewer at least, cannot expect to be spoon-fed each idiosyncratic and novel idea the plays in the making of an exhibition; discovering and evaluating the fascinating motions that inspire curators and artists to work together on individual projects is a part of our responsibility as viewers. What is already there in plain sight should be enough to prompt us to stop, engage, and seek for more.  It is Probably Better to Start from Zero does in fact offer a lot in plain sight; it has ambitiously occupied the Window Space for months consecutively, and continues to alter its aesthetic, conceptual and material landscape so that hardly a moment of stagnation occurs. True, discovering the total richness of the project’s structure and content depends on a keen and committed viewer – not always easy to come by on a busy high street full of commuter traffic. But, to state it plainly, there is more to this window than meets the eye, and so, if you find yourself in Aldgate East, perhaps you might allow for some extra time to consider the depth of what is currently presented by It is Probably Better to Start from Zero.

It is Probably Better to Start from Zero is curated by: Matilde Biagi, Inês Costa, and Antonio Terzini at the Window Space, 59-63 Whitechapel High Street, E1 7PF.

Emma Rae Warburton is a post-graduate student of curating contemporary art, currently based in London, UK. She previously studied a BFA in painting and drawing from Concordia University, Montreal, Canada. Emma has worked on a number of institutional and independent exhibitions with emerging and established artists of international backgrounds and often writes reviews for the online contemporary art magazine thisistomorrow.