When entering the main space of the Cell Project Space gallery the first instinct is to walk around the huge metallic square structure, covered with a sort of white nylon mesh and look for an entrance to it. The structure takes over most of the space in the room and there is no evidence of any way of penetrating it.  Physical access is restricted, as all of the structure is covered in nylon and only a weak outer part of the fabric enables the visitor to witness the interior display, consisting of one of the Rare Earth sculptures, through a hole in the fabric or through a Ricoh wg-m1 action camera disposed on a stick coming out of a slot in the structure.

The mysterious sculpture is part of the on going project Energy/Pangea, hosted and spread out online through the platform energypangea.org. Energy/Pangea is, in the words of Ball, an accumulator of sculptural systems. In his artistic practice there is no overriding concept, but a lot of parts that come together at one time, colliding like particles at a specific moment. The Rare Earth series is the main part of this long term project and compiles, since 2010, a body of sculptural work sorted in formal and conceptual categories, based upon a set of elements from the periodic table. Those elements are consciously chosen for their exploitation by the high-tech industry in the so-called Global South, for commercial purposes.

For this specific production Ball works with the idea of Praseodymium: A soft, silvery, malleable and ductile metal with magnetic, electrical, chemical, and optical properties. The fact that it develops a green oxide coating when artificially prepared might have influenced the more formal decisions of painting the sculptural structure green. The analysis of paranoia as a force that can shape society and its environmental surroundings, is a core part of this work.  Ball is genuinely interested in the critical reactions to technological developments and the potentiality of crisis and breakthrough in terms of “plasticity, uncertainty, mutations and weird antagonisms”.

The big sculpture inside the structure, named Intracrine Signal Aggregate, aims to symbolically attract feelings of anxiety, fear, irrationality, delusions and superstition, transmuting them and spreading them through the space. Those feelings are meant to be detached from any political, scientific, social and economic event, and help to imagine new realities or the shape that future crisis or disasters might take, as Ball acknowledges the opportunities that might arise from extreme, unexpected situations.

Beyond the wall that divides both spaces of Cell, there is an HD video and 4:42min audio piece. One of the screens is showing the interior of the big structure, and the other one depicts the sculpture in an unknown green landscape.

Influenced by the thought that a structural collapse can serve as an opportunity for connecting ideas and concepts together, Ball’s projects are meant to be “simultaneously held together” and then break apart, fooling around with corporative methods and fictitious narratives. 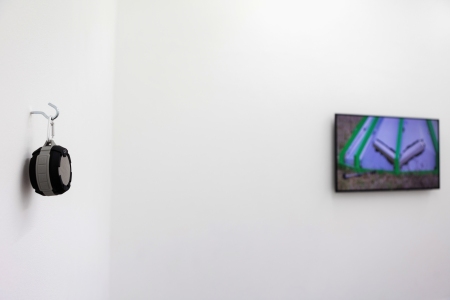 It is perhaps difficult to grasp a direct meaning immediately, at first sight. Yet, Ball, influenced by Latourian and Nassim Nicholas Taleb’s theories of the black swan amongst others, offers a set of speculative proposals in relation to the use of specific resources associated to the technological development, in addition to a friction between concepts and information. Those frictions generate desired conflicts, while unveiling unforeseen cognitive shifts: they hold a meaning together only in interaction with each other within the networked systems Ball created over the years.

Gabriela Acha is an independent curator based in London. She will soon complete an MFA in Curating at Goldsmiths University of London and is running the project space Green Ray in Deptford since December 2015 –together with Nathalie Boobis and Katy Orkisz. In the past she was running collectively the Berlin-based multidisciplinary space Altes Finanzamt. Gabriela is interested in current emergent practices that deal with temporality, networks and materiality.