(…) the boat is a floating piece of space, a place without a place, that exists by itself, that is closed in on itself and at the same time is given over to the infinity of the sea and that, from port to port, from tack to tack, from brothel to brothel, it goes as far as the colonies in search of the most precious treasures they conceal in their gardens, you will understand why the boat has not only been for our civilization, from the sixteenth century until the present, the great instrument of economic development (I have not been speaking of that today), but has been simultaneously the greatest reserve of the imagination. The ship is the heterotopia par excellence. In civilizations without boats, dreams dry up, espionage takes the place of adventure, and the police take the place of pirates.

Foucault, Of Other Spaces: Utopias and Heterotopias 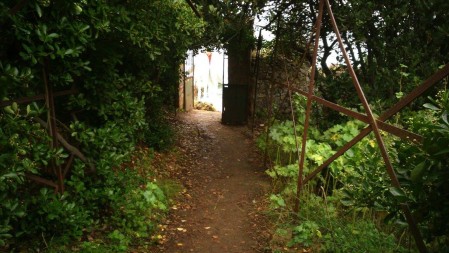 Anna Boghiguian’s work for the Istanbul Biennial (2015) was a techno-boat, rising high in the sky, a big sail showing a cosmic map of economic exchange through the commerce of salt, one of the radical points of Carolyn Christov-Bakargiev’s biennial.

The installation of Anna Boghiguian (titled The Salt Traders, 2015) is presented as “a boat carrying salt in ancient times [that] reappears in a future post-digital world”, in the guide book. Small drawings, salt and other mineral elements are spread out on the floor, two long pieces of tissue hanging from the ceiling and sound of waves and seagulls form a map with hyperlinks, connecting marine routes through times and spaces, in allegorical heterotopical spaces.

The sea, the international waters, has been, for ages, a space of the imagination. 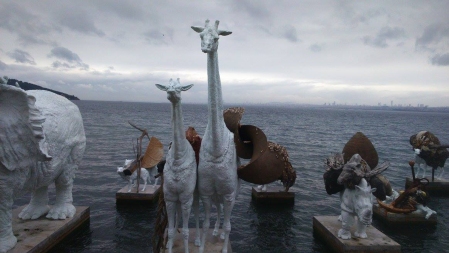 “A boat carrying salt in ancient times reappears in a future post-digital world”. Ancient and future post-digital times, a tension that disconnects the present. Boghiguian’s boat can be just a phantasmagoria. A boat with these characteristics is an element of other times, and it can only emerge if we do an exercise of imagination.

The heterotopical space of Foucault’s ships and the TAZ (Temporary Autonomous Zones) pirate vessels, in Hakim Bey’s words, are elements of the past. The boat as a space of imagination and construction (Guattari speaks of the “vertigo of the irreversibility”, the potential to build a continuos present) has been substituted by a gigantic Leviathan carrier of containers or by an ultra-controlled cruise.

Godard’s film FILM SOCIALISM (2010) was recorded during a cruise for speedy holidays, all Mediterranean history appears in a couple of days on the other side of the maritime windows.

In an interview, Godard answered saying the “film time”, the days or weeks of filming, are the only possible moment to change the way to live (http://documentos.brumaria.net/292-entrevista-a-jean-luc-godard-a-le-monde-10-06-2014). I would like to imagine the days filming in the Costa Concordia (the cruise of FILM SOCIALISM) as a ghostly return of the wild days of pirate utopias, as an infiltration, a tiny virus in the core of our digital present. Do you remember that Costa Concordia was the cruise that sank in the Giglio island in January 2012? FILM SOCIALISM was an advance of the horrible accident, a vision of the closest future.

The brazilian philosopher Peter Pál Pelbart writes another story between the return of ancient boats and the hell of the radical present. Once upon a time, he, and his theater company, (Companhia Teatral Ueinzz, formed with psychiatric patients), were invited to travel between Lisboa and Santos, in Brasil, to create a theater and filmic piece inspired in Amerika, by Kafka, with other two theatre companies, during the journey. The voyagel was in the Splendor of the Seas, another gigantic and Leviathan-like cruise; it was defined as “plasticreal” by one of Ueinzz’s members. The result of the experience was catastrophic. With this absurd beginning, the realisation of a film or a theatric piece was impossible to be achieved. Maybe, just maybe, the only salvation was trying to imagine ways to change the life onboard the cruise. In the text-words-memory of Peter Pal Pelbart the boat is no more a heterotopia, but a metaphor of the world, encapsulated in a gigantic closed ecosystem. All the relationships and possibilities in the capitalistic world are represented inside the Splendor of the Sea; anything but the creation, the “vertigo of the irreversibility”.

The sea is no more a white paper full of action, but rather an infinite wall compressing the boat surface with the pressure of thousands of tons of water. 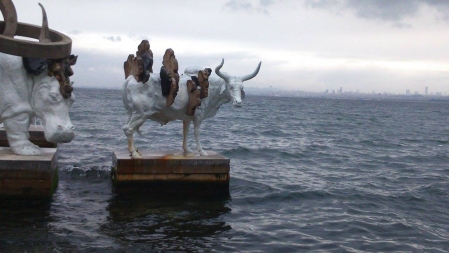 The time spent above the salt water in the latest Istanbul biennial is long, and, following this logic, the ferries and other boats have a big presence. The works of Füsun Onur, Liam Gillick, Marcos Lutyens, Pinar Yoldas or Andrew Yang are based on boats or you at least need them to visit the interventions. The forced use of ferries to visit all the venues makes the visitor enter a different time, far away from the speed -typical races in mega-exhibitions.

One of the deepest experiences in the 14th Istanbul biennial was the visiting of Büyükada, the biggest of the Princes’ Islands, on the Marmara Sea. A summery place for well-off Turkish citizens and the point where Trotsky waited for a visa to continue with the worker’s revolution, between 1929 and 1933. The interventions of the artists on the island are few, the timetable of the ferries is relaxed. The rhythm, the ambience, is calmer than in the rest of Istanbul. The hours are dilated when a couple of cats follows you during the visit of the exhibitions of Ed Atkins or Daria Martin. A time outside of biennial life, the white cube rhythm, the movement of global cities… For a moment I think I have found a heterotopia across the art world, but it is situated in the opposite place to Foucault’s boats and, of course, the TAZ spaces.

Under the sun of Marmara Sea we breathe the time of the summer holidays. Holidays, it seems, are a fossil of modern times. The confrontation with the abandoned mansion of the old Turkish gentry is perfectly solved, the biennial works as time travel and the white cube is substituted by the scenery of other times. The experience is absolutely immersive, you are caught on an island, in a time.

The end of the biennial route is the destroyed mansion of Trotsky, a phantom. There is a brief path crossing the disregarded garden, where Trotsky dictated letters to his secretary, where he spoke about the megaphone-machine of human bodies. The scenery trembles at this point, it is speaking. Before this spot, the visit to the biennial had been an ultra-sophisticated construction between specific artworks, indescribable objects, documents, symbolic venues and, over all, the interstices among all of these elements. The movement through the marked points of Büyükada, as with the previous travel on the ferry to go out from the centre of Istanbul, is an element as strong as the proposal of William Kentridge or of the duo Richard Ibghy and Marilou Lemmens.

A theatrical effect is waiting when descending the path: a giraffe is watching us through a door in the garden wall. The work of the argentinian artist Adrian Villar Rojas, (titled The Most Beautiful of All Monsters, 2015) is an impossible herd of animals carrying abstract baggage. Lions, rhinos, fawns, horses, yaks, squirrels, dogs, a gorilla, birds… arriving from the sea to the temporal house of Trotsky. This surreal image has an echo in global contemporary migration; the texture of the sculptures (a combination of fiberglass, clay and other inorganic and organic materials) reminds me of the work of cartoonist Enki Bilal, his representation of the close future as a solid-gas, a mixture of people, animals, objects and cities in perpetual movement, a forced reinvention of the Earth.

The animals seem just arrived to Trotsky’s house to answer the call for a new international movement. If we do an exercise with our retinas and we blur the sculptures, looking to the background, we will see, not just a neutral sea, in front of our bodies there is the Asiatic cost of Istanbul, a skyline plagued with skylines without an end, one of the final airports in the distopic Bilal’ stories.

If we are coherent with the intention of Carolyn Christov-Bakargiev we should pay attention, not just to the artworks but, to the tension among them, to the interstices, the silences, the movement of our bodies and the venues. But at this spot, which some view as one of the final points of her biennial, a tension between the experience in the closed island and the openness of the cities to places outside the guidebook is created. The heterotopia, the separation of the usual time and spaces, has been a important tool in the biennial, the ferrys were one example, Büyükada island is a perfect combination between a holiday and a museum heterotopia. But the background of Villar Rojas’s work, instead, is the punch of a boundless world. The sculpture of the couple of giraffes is situated at a middle point, it can be both: another artwork in a white cube gallery (I imagine all these sculptures will be showed in a commercial gallery of London or Mexico D.F proximately) or an invitation to link the ruins of Trotsky with the future of the global megalopolis, exampled in the east part of Istanbul, a place almost invisible in the biennial.

And, what is incredible, in this diatribe, is that the election is situated in a movement of the muscles of our eyes.

The contemporary heterotopia is a cinematographic election.

Jose Iglesias Gª-Arenal (Madrid, 1991) is a curator and artist based in London. He is currently studying the MA Curating the Contemporary (London Metropolitan University and Whitechapel Gallery, London) and he is part of the curatorial team of Artifariti 2016, International Art and Human Rights Meeting in Western Sahara. He runs the experimental editorial noPRESENT, focused on synergies among curatorial praxis, feminism and performativity.

2 thoughts on “Where can we find our contemporary heterotopias? II”