This series aims to point out the existing dialogues between art and space, intended as architectonical or geographical.

The topic will be developed from three different perspectives: an historical approach through theories and past displays; a research paper in relation to spaces in London; and some reviews of current exhibitions characterised by a curatorial awareness of the space or by artists working with the concept of space as a material.

Let’s take those as key words to approach to this article.

But what does it mean to speak about space and art? It’s not just about graffiti, monuments or urban art; sometimes the interactions are really subtle. And this has been the case of ALT, a group exhibition curated by Cripta747.

The show took place in Turin, last 5 – 8 November, in an ex-military base located in the very centre of the city. It was part of an annual project run by Urban Center, an architects’ association, in order to celebrate the anniversary of a large urban transformation of Turin that, over the course of 20 years, completely changed the city and its industrial identity.

What made the exhibition interesting was that the committee was clearly asking the curatorial team to tackle an architectonical theme, and moreover to place it in a contest of celebration, risking a shallow outcome.

Through the works of art selected, the curatorial trio turned their attention to human perception rather than buildings. It was presented as a landscape populated by moments and feelings; a landscape in which the presence/absence of the human being allows the visitor to acquire an awareness of the main character in the fight (or dialogue?) between progress/conservation and utopias/realities of city developments.

Approaching the rundown space, the first visible work of art was Torino, a pastel by the painter Ugo Alessio. And here we already found a first contrast: a small drawing dated 1950, representing a beautiful and warm sunset at the seaside, but titled Torino, a city which is three to four hours by car from the coast; and set up on an ex-white, but still fascinating, wall with some black signs left by mysterious unknown past paintings.

I said that the pastel was the first visible work, but actually it wasn’t the first exhibited because the eye reacted to that wall from a specific point of perspective. There was a previous room, same style walls but two different artists: Brigit Megerle with the collage Altglas and the paint Female Pleasure, and Italo Zuffi with Gli ignari, a sculptural installation in which few green ceramic peapods represented a group (acquaintances? friends? relatives?) unaware of the fate. 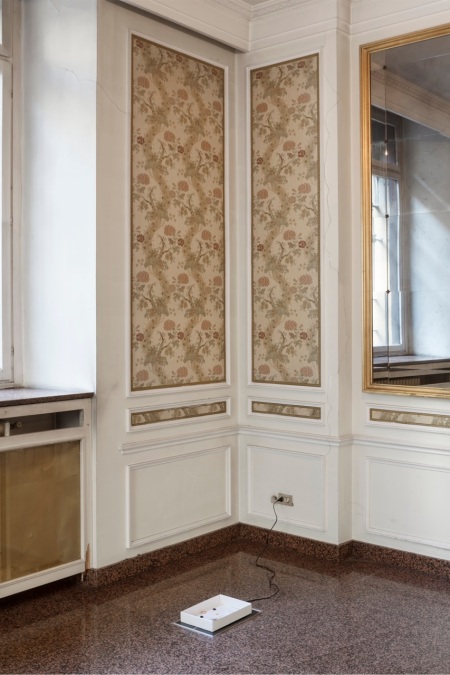 Acquaintances, friends and relatives, was nevertheless a plaster sculpture by Giulio Delvè, located in the same room of the pastel mentioned earlier.The artist creates his sculptures by material theft. Suddenly the empty takes place and the absence determines a presence, a memory of what it has been. Then if this memory is a spatial memory or a human memory… well this is up to our interpretation.

The next room was a massive elegant saloon with a majestic classical mirror, green and gold wallpaper, neoclassical ceilings and a bright marble floor. It was dedicated to the artist Patrick Tuttofuoco and the reflecting surfaces of the room created a perfect interaction between space and art, intensifying the meanings of the two works exhibited. Charles, was a mixed media sculpture, a two-faced object of a head and an apple. Untitled, was a neon reproducing the shape of a hand. The mirror of the room immediately revealed the other side of the sculpture (fresh/spoiled apple – head/scary face) and the bright floor created a reflection of the hand, a sort of comforting embrace, facing the contradictions.

Close to the ex-saloon, another charming room hosted The contents of different peoples pockets kept at body temperature, a work by Jason Dodge, in which the simplicity of familiar daily objects (a coin, a rubber band, a crushed receipt and more) could not have been a more powerful statement of human presence/absence.

At this point the visitor was asked to return to the main entrance and visit the western area of the building (oh! A missing detail: we are talking about a 7500 square metre space). Here, the first room was characterised by some green Art Deco lamps and photographs by Daniel Faust: 1991 and Arizona Mining and Mineral Museum (Phoenix) both revealing eccentric details discovered in museums.The interest in this artist is not about the museum and the objects, rather about what a past human presence (again) could have noticed during a visit.The following exhibited work of art was Violent Incident a video loop by Bruce Nauman in which a quiet dinner suddenly becomes a fight facing the human condition and his sense of impotence.

Between the lasts two works mentioned there were few empty rooms, a toilet, an odd salami keychain on the wall and an equipped mess hall. In one word: the space itself declaring its history and its past presence, now an absence.

The visitors followed then up to the first floor, which was not open to the public except for some rooms hosting the exhibition. Italo Zuffi first, then Untitled (Essences) by Kirsten Pieroth. 25 glass cans containing boiled books and personal documents of the artist based on the physical theory by which modifying the structure does not implicate the loss of substance. Thus: 25 glass cans are testimony to a human being’s identity. Then the last room: a leisure area, maybe an ex-cafè. In the room two works: Dom f10 by Gianni Ferrero Merlino and Saint Sulpice, a print by Man Ray.The Man Ray print represented a glimpse of Parisian roofs and in a way invited the visitor to have a look outside the window… toward the courtyard…just to compare it with the real context. And there, in the courtyard, the last work of art, a Lawrence Weiner piece: Passed Over. Over passed

Nothing to add at this point… just a question: who? (passed over)

The abandoned space? The human being? Both?

The entire exhibition easily switched the attention from the urban to the human.That was possible according to the fact that the power of a space stays in its capacity to bring not only its own identity, but even the tracks of human beings that lived it. The entire set up was a perfect example of two identities speaking:

And we are at the first line again, with the three key words.

Readers now it’s your turn: think about it.

Caterina Avataneo (Turin, 1989) is an Italian architect and curator based in London. She is now attending the MA Curating Contemporary at London Met and Whitechapel Gallery.

Her past experiences include: Between Crinkles curated exhibition, Turin (IT); Norma Mangione Gallery, Turin (IT); Paratissima, Turin (IT); Hat Gallery, Valencia (ES); Fondazione Sandretto Re Rebaudengo, Turin (IT).