The phenomenon of the selfie has been the subject of much debate and discussion in recent times. This essay aims to position the selfie in context within the dominant narrative of our epoch; neo-liberalist globalisation. We could say the selfie sits at the juncture of 2 main points; the mass-production of smartphone technology as commodity and the effects of mass-media on identity, both engendered by neo-liberalist ideology. Of course self-portraiture has been practised long before the age of globalisation, however, the argument being made here is that the selfie as we know it today encompasses more than a self-portrait in the traditional sense, as Dr Eugenie Shinkle asserts at the National Portrait Gallery’s event on the subject in 2014: ‘The Curated Ego’

“The term selfie is actually a slightly misleading one, though its short for self-portrait […] the selfie is something quite different from what we’re accustomed to thinking of as a self-portrait. It’s not a reflective, carefully considered study” (National Portrait Gallery, 2014)

The selfie does not, and does not claim to, demonstrate any deep facets of character-the taking of a selfie is a spur of the moment, seemingly instinctual action. Selfies are transient, and the sheer volume alone sets them apart from classic self-portraiture.

It could be argued that the effects of our current paradigm may be difficult to ascertain whilst we are still in the midst of it, however a number of writers, sociologists and psychoanalysts have postulated a correlation between a neo-liberalist economy and the effects on society, identity and culture. Paul Verhaeghe does this in his book ‘What About Me? The Struggle for Identity in a Market Based Economy’-where he investigates the effects of social change on our identities and psychological wellbeing. Verhaeghe asserts that our inner-world (identity, personality etcetera) is shaped by our environment, through a process of mirroring we incorporate the context in which we live as part of our identities, he states ‘the mirror that our environment holds up to us determines who we become,’(P. Verhaeghe, What About Me? The Struggle for Identity in a Market-Based Society, 2012) And again in Christopher Lasch’s The Culture of Narcissism where Lasch, in some detail, explores social contexts and correlates these to various pathologies that (American) society has developed. Both Verhaeghe and Lasch argue the case that a neo-liberalist society evokes individualistic tendencies and engenders a culture of narcissism. And it is with the rise of digital technology, and more specifically the smartphone that has allowed anyone (anyone who can afford to buy one i.e. people in Industrialised countries) to become a photographer, this has happened only in the last 30 or so years, and this new generation of photographers’ most popular subject matter? The self. Type the word selfie into Google and it will give you around 236,000,000 results, along with a number of articles and newspaper headlines. Would it be out of the question to assert then that the selfie, contextualised within our ‘everyone can be a photographer’ digital camera and smart phone culture of today, embodies this very notion? This ‘everyone can be a photographer’ philosophy has been harnessed by advertisers since the start of mass-produced cameras, and again most recently with the smart phone-see images below.

It is in our very recent history; where political systems, financial systems and media have amalgamated in to a singular self-perpetuating entity-the age of mass media, post modernism and the neo-liberalist narrative. It is in this period where a transmutation of our relationship with the image and its modes of representation can be identified, we could say that the rise of the printing press first subverted our notions of representation, and then again with digital technology and the internet. The rise of neo-liberalism and consumerist culture, spurred on in the Thatcher and Raegan years, has had drastic societal effects on many levels, this is also linked with technological advances, that have not only changed the way we take pictures but how we view and share commodities, money and cultural products (art included)-communication is now virtually limitless. Whilst some may argue that mass media began at start of the age of mechanical reproduction, it’s clear that the meaning of the word is more explicit in the digital era, as John Walker writes

Some historians regard the invention of printing as the beginning of the age of mass media, but a situation in which billions of individuals are exposed to daily to a spectrum of powerful mass media is surely uniquely twentieth-century experience (J. Walker, Art in the Age of Mass Media, 1994)

And this is when we see a number of artists start to explore themselves in terms other than just representation of the self in the traditional sense, but of themselves in a wider context i.e. social identity-race, gender etc. Cindy Sherman was one of these artists, in the series ‘Untitled Film Stills’ she takes self-portraits (self-portrait may be a slight misnomer in this case, the images are simultaneously self and non-self-portraits), where she masks herself in various guises, costuming herself to appear as common female stereotypes (damsel in distress, ‘femme fatale’, sex object etc), and then photographing herself as various ‘characters’ from popular cinema of the 1950s and 1960s. We could argue that Sherman’s work is symptomatic of this epoch of mass media and mass culture, confronted with a continuous stream of images of ‘a female’ (the female image constructed within the male gaze) Sherman is questioning her social identity as a woman, the pictures all depict women, and yet there are none actually present in any of the frames, merely the mass media’s representation of women Craig Owens writes…

“By implicating the mass media as the false mirror which promotes such alienating identifications, Sherman registers this ‘truth’ as both ethical and political” (C. Owens, October Files: Cindy Sherman, 2006)

Would it be out of the question to correlate the rise of identity theory with the rise of mass media? Engendered by the dominant free-market, neo-liberalist ideology? The data from a recent study: Social Identity Theory as a Framework for Understanding the Effects of Exposure to Positive Media Images of Self and Other on Intergroup Outcomes (D .Mastro, C. Mckinley, K. Warber, 2014) suggests a link between inter and outer (ethnic) group perceptions of self and other and exposure to media images, so here we have empirical evidence that suggests exposure to mass-imagery affects the way we perceive ourselves and others.

“The means of making, manipulating, presenting and consuming images constitute a major consumer market which-certainly since Kodak in the late nineteenth century-provide domestic life with powerful means of self-representation, tools of symbolic reproduction. Yet they do so in the form of commodities” (M. Lister, The Photographic Image in Digital Culture, 1995)

And it is for this reason that we can correlate the rise of domestic photography and camera technology with the rise of a free-market based economy. For it is in the form of commodities that the latest camera, the smartphone, is being sold to billions worldwide. Within a short space of time this technology has almost completely integrated itself into our society, some people call the smart-phone ‘wearable technology’, like an item of clothing, or perhaps at a deeper level, an extension of our own bodies. This technology (and all technology) alters and mediates our relationship with reality (E. Shinkle, National Portrait Gallery, London, 16th January 2014)

This apparent desire to control representation, this curation of the self, could stem from the mass-consumption of imagery-perhaps our innate faith in representation has been diminished, when an image is copied and shared, intrinsic meaning becomes diluted, as Christopher Lasch states ‘The proliferation of recorded images undermines our sense of reality’ (C. Lasch, The Culture Of Narcissism, 1978) this may explain why the younger generation are more likely to take and share selfies-born straight into a world of digitally homogenised image reproduction (the ‘Web 2.0 Generation’). Scott McQuire articulates this change in our perceptual relationship with representation, he writes…

“Where photographs were once thought to belong to an order of reference in which images depended on reality, the growing autonomy of the image-world has complicated this trajectory” (S.McQuire, Visions of Modernity, 1998)

What is neo-liberalism? The term is complex and incorporates a number of facets, it can be broken down in to three main subsets: policy, ideology and governmentality (see Wendy Larner’s essay Neo-liberalism: Policy, Ideology, Governmentality, 2000 for a more thorough analysis). P Verhaeghe writes

“Throughout history, economies have always been embedded in religious, ethics, and social structures. This no longer applies in the case of neo-liberalism. On the contrary, religion, ethics, and society are subservient to ‘the market’. In that sense, neo-liberalism is no longer an economic theory, but a much broader ideology” (P. Verhaeghe, What About Me? The Struggle For Identity in a Market-Based Society, 2012)

And it was Thatcher that said ‘Economics are the method; the object is to change the heart and soul,’(M. Thatcher, Sunday Times, May 3rd 1979) this quote perfectly encapsulates what neo-liberalism is at a more considered understanding of the word (and said by one if it’s main proponents), and it is this that gives rise to individualistic personality traits, somewhat paradoxically though this is a collective ideology that permeates through society as a whole, John Walker states:

“Western societies tend to be dominated by the ideology of individualism. […] For decades people in the west despised the so-called communist societies because ‘everyone had to think and dress alike’. Yet ours is an age in which industry makes millions of blue jeans available to millions of wearers, while advertisements celebrate the individualism of choosing blue jeans (one could call this paradoxical conformism ‘mass individualism)” (J. Walker, Art in the Age of Mass Media, 1994)

Lasch, like Verhaeghe, argues that it is the dominant social conditions that generate ‘narcissistic personality traits’ (C. Lasch, The Culture Of Narcissism, 1978) in society, with regards to the members of society (he somewhat chauvinistically uses the noun-men, throughout the book, however one can assume he means members of society of both genders) he states:

“They wish to be not so much esteemed as admired. They crave not fame but the glamour and excitement of celebrity. They want to be envied rather than respected” (C. Lasch, The Culture Of Narcissism, 1978)

These personality traits and tendencies seem to hold a significant kind of relevance when we look at the selfie. We could argue that this collective individualism is the result of the neo-liberal ideology emanating from the small percentage of the population with more power, dominating the economy, politics, commerce and media, in short-virtually all cultural and mental production. Verhaeghe argues that this ‘new social model has produced a new identity with different norms and values’ ’(P. Verhaeghe, What About Me? The Struggle For Identity in a Market-Based Society, 2012) this is another facet to the argument-that the selfie is symptomatic of this new identity dissonance, resulting in a need for us to create new identities for ourselves i.e. the fictionalised versions of the self that we upload to Instagram as selfies. Or maybe this corroborates Verhaghe’s other assertion that we all mirror our environment, the selfie phenomenon is simply a group of people in society mirroring their environment of constantly reproduced fictional image based representation-so we have a continuous stream of media representation, and now a continuous stream of self-representation that mirrors it.

Photo: Harry Brandrick, Old Street Station, ‘Do Your Photos Stand Out From The Crowd? 2015 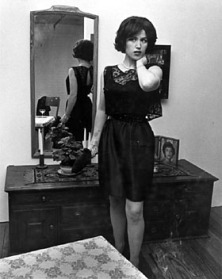 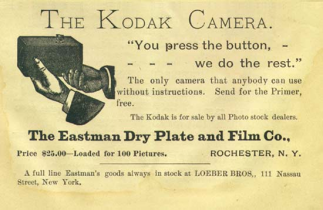 1888 Kodak Advertisement-‘You press the button, we do the rest. The only camera that anyone can use without instructions’. https://en.wikipedia.org/wiki/Kodak, accessed 3rd November 2015

Harry studied Fine Art (Photography) at London Metropolitan University; after spending some time in Paris he is now based in Bristol working a number of projects.

One thought on “Post-modernism, Neo-liberalism and the Selfie”