An exhibition that revolves around a simple, tiny thing, nothing other than dust. Nothing other than an enigmatic and emblematic picture taken in 1920 by Man Ray in Marcel Duchamp’s atelier in New York. He saw a sheet of glass on his friend’s desk, covered with dust, that Duchamp had left there on purpose for the duration of few months – one of the working phases of his artwork known as The Large Glass (1915-1923). Ray placed the camera in front of it for a long exposure while the two friends went out for lunch. The result at their return was this displaced, poetic, indeterminate image. It could seem a bird’s eye view of a landscape, bringing into question the issues of scale (panorama or close-up still life?), subject (field or dust?) and genre (artwork or document?). 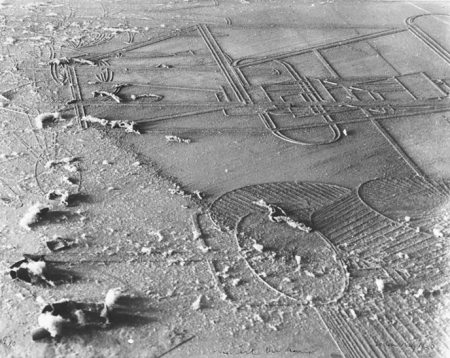 The picture is soon considered as visionary and announcing works of artists associated with the Art brut, Fluxus and Arte Povera. In 1991, French photographer Sophie Ristelhueber, whose works concern mainly the human impact of war, said that the picture (entitled Dust Breeding) is a great representation of our vision of the world: “We have at our disposal modern techniques to see everything, to learn everything, but actually, yet we see nothing”. And then, she produced some large-scale bird’s eye shots of landscapes in the conflict areas of Kuwait and Beirut after the Gulf War, called Because of Dust Breeding, now exhibited at Le Bal, Paris.

Aside from those, a variety of work inspired by dust, dedicated to dust, devoted to dust, from past and contemporary artists. In the first room, the visitors are embraced by the soundtrack of the opening scene of Alain Resnais’ Hiroshima mon amour, where the arms of two lovers are being covered with radioactive dust.

Among other pieces, there is a vitrine with postcards from the 1930s, illustrating dust storms in the States, there are anonymous photographs of factory workers and graves of the 1910s and 1920s, almost scientific studies of Jacques-André Boiffard, aerial shots coming from the 1940s, and, obviously, the culprit Ray’s pictures in the middle of the main wall.

The second big room welcomes people with Robert Filliou’s dirty clothes, who in Dust of Dust (1977) cleaned some paintings of the Louvre, taking polaroids of his performance and keeping the rags in little paper boxes. There is a long table with black and white shots by Gerard Richter, who photographed one of his own abstract paintings as if it was a strange landscape (Details from a picture 1978, 1999). There is Robert Burey’s The disappearance of darkness, in which a crowd is looking at a big dust cloud, that is ironically nothing but the destruction of Kodak factory in Canada in 2005.

Next to works that had the purpose of looking into dust as main subject, there are others thanks to the curatorial choice of David Campany[i]. What is dust beyond dirt, rocks, death? It is Vandalism in John Divola’s documentation of dust movements (1974-75), it is silent nature in Kirk Palmer’s video Murmur (2006), it is Royal Road Test by Edward Ruscha (1967), who threw his typewriter from a moving car in the middle of the American countryside and recorded it as a crime scene.

Dust can certainly become protagonist, it is everywhere and no matter how much we try to get rid of it. It will come back.

Artist quotes are written on the lower part of the walls, forcing you to look down, where the dust is present and staring at us. Everything in ‘Dust/Histoires de poussière’ is meant to obfuscate little by little the spectator in an inspiring spiritual journey. It is an offer of travelling in the middle of dust and pondering on our surroundings from a different point of view.

And I will show you something different from either

Your shadow at morning striding behind you

Or your shadow at evening rising to meet you;

I will show you fear in a handful of dust.[ii] 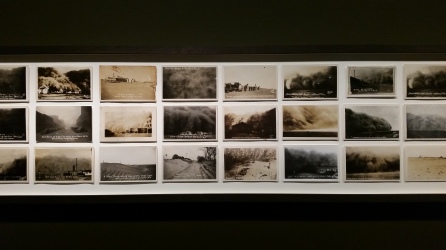 Silvia Meloni (1988, Bergamo, Italy) is a curator based in Paris, FR. She graduated in 2011 in Art History at Università deli Studi di Milano (Italy), in 2013 she completed an MA degree in Art History in Pavia (Italy) with specialisation in Contemporary Art and in 2015 an MA in Curating at the Cass Faculty of Art and Design and Whitechapel Gallery. She worked at Sprüth Magers London and is currently collaborating with The Agency Gallery, London, while working on independent projects. Her works pay attention to the relationship between contemporary art and history.

[i] Writer, curator and artist. Author of several publications, such as Walker Evans, the Magazine Works (2014), Gasoline (2013), Photography and Cinema (2008) and Art and Photography (2003). He wrote more than 150 essays about history of photography, collaborates with Frieze, Aperture and Source and founded PA Magazine.