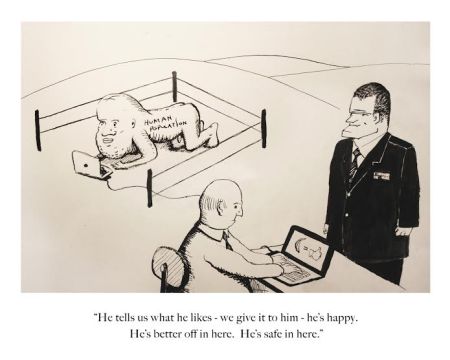 You might feel free, you might think you have freedom of speech, you might update and prune your profiles. Untagging yourself from a bad photo, inserting yourself into debate, pouring ice on yourself. You’re building a simulacrum of yourself in the place where l’esprit d’escalier doesn’t trouble you because your speech is accurate and precise, your face is perfectly lit, your friends are all on display and they’re only a click away. Social media is a monument to the individual, you, you, and you.

You Like the picture because, because why? What caused you to click it? Was it the laughter it brought or was it the hangover making you cling to your duvet? Or was it the fibre-optic bringing it to you? They all caused it. Causes are multiple but can never be considered finite because a thing has as many meanings as are capable of seizing it (Foucault, 1991: 77; Deleuze and Guttari, 1983: 156). Clicking Like is an event within your life, granted it is a small one but an event has occurred none the less. The LOL pic you click has interested you, but you have reciprocated an interest in it. Somewhere something makes a little note about that, who knows when it might be useful.

This event has an effect. Your Liked funny will appear in our News Feeds. Equally your risqué holiday snaps might but there are no Likes because we do not want to reveal ourselves as peeping toms- or if we Like are we trying to cement ourselves as heterosexual? Instead we like the funny, the intellectual, and the inane the practice of Like feeds back to our own object, in this case the object is our Facebook profile, we are telling our computers what we like constantly. Our Facebook profile has many meanings, the NSA surveillance apparatus has its own reasons for wanting to know the activities and actions of individuals. How does XKeyscore curate our curations?

XKeyscore is intended to pre-empt terrorist activity using data-mining techniques on almost all Internet traffic. XKeyscore creates profiles of online conduct that can be given a level of risk given the relation to several indicators, which are assumed to be accurate and valid predictors of undesirable activity. Monitoring huge amounts of Internet traffic is carried out in order to identify ‘anomalies’ in behaviour that are denoted as risky by virtue of being anomalous, quite the tautology. Where the boundaries of anomaly are placed is up to those doing the searching, namely the IC communities within the Five Eyes group; US, UK, Canada, Australia, and New Zealand. Anomalies that legitimise having a closer look include: someone using language that is out of place for the region they are in, someone who is using encryption, someone searching the web for ‘suspicious stuff’ (NSA, 2008: 15).

In demanding to look for anomalies something else is created, the notion of an ideal type of conduct. These forms of normal conduct relate directly to the types of lifestyle that are lived by the majority of individuals who live in the nation-states comprising Five Eyes, which is citizens of liberal-democracies. Liberal-democracies conduct surveillance on a scale that surpasses anything in history because of the communications technologies which enable us to create self-simulacrums (social networks) and that leave traces of our lives all over the Internet to be vacuumed up.

These technologies- XKS is but one- follow a quantitative methodology found in Big Data, the better the data set the more accurate the results. Improving datasets is done through aggregating multiple sources of information. Financial records, flight records, records of all kinds can and will be used for purposes other than they were originally intended for. They will be used to create profiles of behaviour that can be used to identify individuals in a game of cat and mouse involving the state and its free citizens. This technique is used in marketing in order to target consumers that seek to satisfy themselves through consumption. A target for XKS is anyone who turns their back on a consumer lifestyle or comes from a political-, social-, or economic- culture that is different to liberal-democracy. Consumer lifestyle has blossomed in the Five Eyes nations since the end of World War II and has spread around the world. Pre-emptively securing the borders of a nation-state from external threats coming in is one thing, but what about if the threats are found within the Homeland?

An analytic of power involves exploring the ‘forces, logics and dynamics’ that form assemblages of practice (Dillon and Lobo-Guerrero, 2008: 272). Biopower is a form of power that seeks to foster the life by systematically assigning values to actions and individuals (Dillon and Reid, 2001: 49). Biopolitics takes biopower a step further and looks at populations defined by traits that extend from being homo sapiens; ethnicity, religion, sexuality, political affiliation, cultural tastes, and makes these traits explicitly quantifiable and open to analysis. XKeyscore makes human conduct online open to calculation and risk logics. The political impact of this are measures which will seek to deny individuals mobility- through arrest, targeted killings, denial of entry- on the basis that they might be subversive to the status quo.

The general economy of power in contemporary society is one dominated by a ‘domain of security’, a biopolitics of security is where security has been explicitly measured- terror threat levels, doomsday clocks, GDP, GNI, HDI, HDI+. Security is not one thing but a complex interplay of everything we think we need to keep on living. The biopolitics of security emerged during the 18th century at a time when industrialisation was rapidly developing and the ruling class’ view of the masses was changing; workers were needed in factories not just as immobile and impoverished serfs living off the land cap in hand, it was not the irresistible urge of human’s to claim their rights but a softening of ruling elites’ disciplinary techniques that allowed freedoms to be won.

A biopolitics of security places species life as the referent object of political strategy, that political strategy is liberalism (Dillon and Reid, 2009: 147). What kind of life does the cementing of natural rights ensure? Life for who and for what end? Life in an advanced liberal society means progression and evolution, the what in question is constantly forming, as different behaviours emerge constantly, from the perspective of the IC constant monitoring is therefore required to assuage behaviour as threatening or not (Dillon and Reid, 2009: 149). Our activity on the Internet provides the data to be analysed in these apparatus.

Mobility is a fact of life, it is inescapable and essential yet the mobility of some entities causes issues for others. Internment of individuals, restricting the physical body, has occurred for thousands of years. In liberal societies mobility is intrinsic to its perpetuation, people and capital must circulate but in doing so risks are perceived (Amoore and de Goede, 2008: 173). The rationale of pre-empting activity is what drives XKeyscore and its ilk, the need to know what an individual is going to do.

Control is a type of governance that is favoured in advanced forms of liberalism as it enables governing to occur at a distance, in this instance by monitoring Internet traffic. It sees humans as having separate identities and attempts to assign risk profiles to them. Doing so reveals which conduct is conducive to a lifestyle of consumption and which conduct is not (Rose, 2000: 337).

What does this mean?

Our online activity, our curation of information about ourselves on social networking sites, provides the surveillance apparatus with its data. The IC curates this data itself and looks for anomalies which it can use as justification for other actions such as; passing legislation that is (positively or negatively) discriminatory, arresting individuals, denying them access to certain geographical locations. This is Big Government using Big Data to solve Big Problems which they have arguably created themselves. The Five Eyes group wants to know everything about everyone and we’re giving it to them for free.

XKeyscore is not protecting us, it sustains a status by giving unimaginable knowledge and power to entities that have proved time and again that they cannot be trusted to have our best interests at heart. The political and economic structure- liberal-democracy- that the Five Eyes mass surveillance apparatus comes from is one that breeds inequality- economic, patriarchal, and racial. Citizens of those nation-states might threatened by terrorism but we should be encouraging individuals to check if they want to be protected by the people offering the protection in the first place. If there is a fight (or war even) going there seems to be a tendency for people always assume they’re on the right side to begin with

Mat Sayer is 21 years old, recently graduated from Newcastle University with a BA in Politics (2:1). He wrote his dissertation on XKeyscore, a topic which he wishes to work on further. Currently he lives in Montenegral Alto, a village in rural Spain, where he scrapes a living as a freelance writer. He attended Kirkby Stephen Grammar School, a tiny comprehensive despite its name, that was a suffocating experience at the time but in retrospect it made him who he is today for better (for worse). He occasionally uses social media but can’t be arsed with it most of the time (@mtsyrr though).

4 thoughts on “Curating the Self”