Representing Cambridge, Patterson is the chief of the exhibition in her conceptual and oh-so-effortless way of introducing an audience to science, astrology and, in this case, fossils. Unlike the other countries – Malawi, Kenya and Vietnam to name a few – Patterson deals with subjects deep rooted in us all; the meaning of life; where did we come from and how did we get here?

Her Fossil Necklace is accompanied by a short film documenting the scrupulous, albeit arduous research. Like other works such as All The Dead Stars, Patterson turns to science as a platform from which to construct and reconnect us with our evolution and progression. The 170 small beads humbly represent the passing of geological time which allow imagination to unpick layers upon layers of history; not only a history belonging to ourselves, but the history of the world. Although handcarved, the beads act as a small part of human curiosity, as Jim Ede said,“You may search a wide seashore or the reaches of many rivers and never find one, and then suddenly it lies before you – an ordered unit, shaped of this order from the countless vicissitudes of nature’s course.” 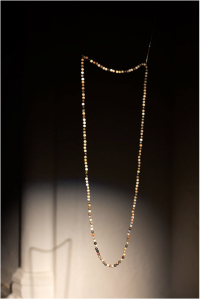 You are given a plastic magnifying glass with which you take cautiously and enter a darkened room through a thick curtain. The necklace is lit only by two spotlights. “It’s beautiful.” I said as I came from behind the curtain.

“It’s funny, though.” The gallery assistant replied, “The exhibition was on for two months before they realised they’d installed the necklace the wrong way around.”

“Yeah. Also, it was pitch-black before, no lights whatsoever. She wanted it that way but we got too many complaints so they had to make it visible.”

The history unpicked is dense and is full of an innumerable amount of objects and materials that surround our peripheries. Can we gain a valuable understanding of ourselves from Patterson’s respectful display? Or are the beads another map of what might be rather than what is?